The Finnish regiment was created in 1620. It became an Indelta regiment in 1733.

In 1634, a government regulation ranked the Österbottens Regiment 20th among the infantry regiments.

In 1699, the regiment garrisoned Riga. In 1702, it joined Schlippenbach's army but a detachment remained in Riga. This latter detachment joined Lewenhaupt's army in 1705. One battalion followed Lewenhaupt in the summer of 1708 when he advanced in Ukraine and fought at Liesna on September 28. This battalion finally surrendered a few days after the battle of Poltava in June 1709. The other battalion was captured by the Russian at Riga in 1710. However, the regiment was re-established during the same year and assigned to the army of Finland.

In 1718, the regiment took part to general Armfeldt's campaign in Norway. After the peace of 1721, it returned to Finland.

This Finnish regiment consisted of 1,200 privates in 2 battalions of 4 companies. Each company had 150 privates and 11 officers, NCOs and musicians.

In 1756, the regiment was reorganised, integrating the Kajana independent company as its 9th company. This brought its total force to 1,350 troopers.

By the end of August 1757, 6 companies of the regiment (about 900 men) had been transported across the Baltic towards Swedish-Pomerania. 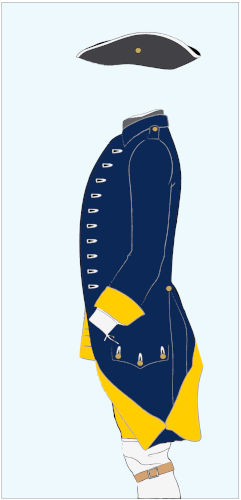 Schirmer as well as Pengel and Hurt mention a yellow collar and white trimmed buttonholes.