From August till the end of 1760, this grenadier battalion was temporarily converged with VI. "Standing" Grenadier Battalion (G-VI/G-VIII).

During the winter of 1760 till 1762, this grenadier battalion was converged with Grenadier Battalion 24/34.

At the end of August 26 1756, a Prussian army launched an invasion of Saxony. This converged grenadier battalion was first assembled on September 22 at the camp of Zehista as Bevern's Corps was marching towards Bohemia. On October 1, it took part in the Battle of Lobositz where it was attached to the brigade of Major-General Itzenplitz in Kleist's Division. On October 2, it was part of Bevern's force sent to lay hold of Tschischkowitz (present-day Cizkovice) on the road towards Budin. 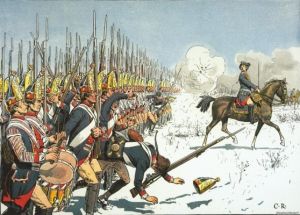 In the Spring of 1758, the battalion took part in the unsuccessful invasion of Moravia. On August 10, the battalion was part of the corps who accompanied Frederick II when he marched from Silesia to join Dohna to contain the Russian invasion of Brandenburg. On Tuesday August 22, this corps made a junction with Dohna at Manschnow. On August 25, the battalion fought at the Battle of Zorndorf where it formed part of the vanguard led by Lieutenant-General von Manteuffel. On September 2, when it became clear that the Russian army was slowly retiring towards Landsberg, Frederick assembled the corps that he had brought with him from Silesia and left for Saxony where his help was badly needed. On November 18, about 100 grenadiers from this battalion (or from Battalion 2/G-II) took part in the Combat of Güstow, successfully defending the village against superior Swedish forces.

On July 23 1759, the battalion was at the Battle of Paltzig but was initially posted at Züllichau to guard the field bakery. A few weeks later, on August 12, the battalion fought in the Battle of Kunersdorf where it was deployed in the second line of the right centre as part of Grabow's Brigade.

On June 23 1760, the battalion was annihilated at the Battle of Landeshut. It was then partly reconstituted (2 coys) during the winter of 1760 and converged with Grenadier Battalion 24/34.

At the end of June 1761, the battalion formed part of Ziethen's Corps who launched a raid in Greater Poland. In August, the battalion was with the Prussian army of King Frederick II of Prussia encamped in the entrenched camp of Bunzelwitz (present-day Bolesławice) near Schweidnitz in Lower Silesia. In mid-September, it took part in a second raid in Greater Poland under Platen. On September 15, the battalion fought at the Engagement of Gostyn where it was deployed in the first line of the left wing. However, after this victory, Platen realized that his line of retreat was cut. In such an eventuality, Platen had been instructed to head for Pomerania and to reinforce the corps of the Prince von Württemberg for the defence of Colberg. Therefore, from September 17, he marched by Stenschewo (present-day Stęszew), Posen, Neustadt bei Pinne (present-day Lwówek), Birnbaum (present-day Międzychód), Schwerin an der Warthe (present-day Skwierzyn), reaching Landsberg (present-day Gorzow Wielkopolski) on September 22. Platen's Corps then headed for the camp of Colberg. On September 27, the corps made a junction with the corps of the Prince of Württemberg. The battalion was later part of a corps sent from Colberg to bring back supply and provisions. On October 22, the battalion took part in the Combat of Gollnow. By November 9, it was at Pyritz where it formed part of Platen's vanguard. On November 26, the battalion was part of a small Prussian force encamped at Fierhof which was attacked by Shetniev's detachment. During this engagement, the battalion lost 107 men (including 2 officers and 44 privates taken prisoners). On December 12 during the Combat of Spie, the battalion was left behind at Neumuhl to protect the line of retreat. The battalion retired by marched by Schwedt and Berlin and finally took its winter-quarters in Saxony.

By mid-March 1762, the battalion was serving in the Army of Saxony under the command of Prince Henri. The battalion seems to have been seriously understrength because Henri asked specifically for picked men to complete it. From August to October, the battalion took part in the siege and recapture of Schweidnitz. On August 16, it also fought at the Battle of Reichenbach where the Prussians repulsed the last attempt to relieve Schweidnitz.

The grenadiers wore the uniform of their own regiments. For details about these uniforms, please refer to the articles related to regiments von Manteuffel and Prinz Moritz von Anhalt.