At the beginning of September 1755, the Baron de Dieskau, commander of the French force on Lake Champlain, decided to attack Fort Lyman, because he was convinced that William Johnson's main force had already retired from the shores of Lake George. During his advance, he soon learned that Johnson was still encamped at Lake George. Dieskau then changed his plan and advanced on Johnson's camp. 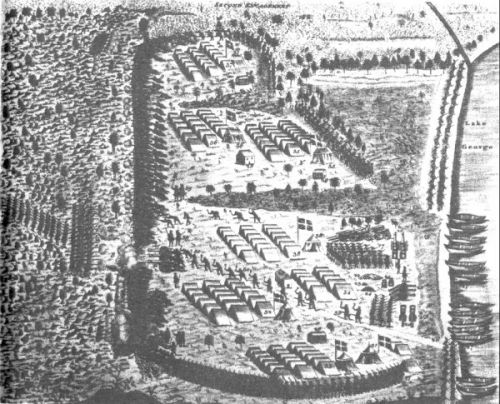 Dieskau's force of about 1,500 men advanced rapidly through the forest and soon entered the rugged valley that led to Johnson's camp. The regulars marched along the road while Canadians and Indians moved through the woods. They were 5 km from the lake when their scouts brought a prisoner who informed them that a British detachment was approaching. Indeed, at 8:00 a.m., Johnson had sent a party of 500 men under Ephraim Williams, including 200 Mohawks led by their chief Hendrick, to cut off Dieskau's retreat from Fort Lyman. Dieskau prepared an ambush. Around 10:30 a.m., Williams' detachment fell into this ambush and soon routed towards Johnson's camp, pursued by the French.

Williams and Chief Hendrick were both killed during the fight. Dieskau paused about 11:00 a.m. to reorganise his force.

Meanwhile, Johnson, upon hearing the sound of musketry prepared to defend his camp. The Provincials quickly erected an improvised barricade made of tree trunks, wagons and bateaux in front of the camp. The barricade extended from a hill on the left to a marsh on the right. Three guns were positioned to enfilade the approaching road and a fourth was dragged to the top of the hill. Soon, men from the defeated detachment started to arrive to the camp. Some 500 men were detached to guard the flanks of the camp while the rest took position behind the barricade. Units from Massachusetts were on the right wing and those of Connecticut on the left.

Around 12:30 p.m., Dieskau's force appeared in good order within 150 yards from the breastwork. The regulars were on the road and the Canadians and Indians approached through the woods. The regulars formed lines and began firing by platoons. The three guns commanded by Captain Eyre then fired grapeshot, forcing the French regulars to retire and take cover.

After being repulsed in the centre of the British positions, the French made a second attempt on the British right against the regiments of colonels Williams, Ruggles and Titcomb. This new attack was also repulsed. Meanwhile, firing had become general all along the line. Johnson was wounded and Lyman took command. The French allied Indians managed to gain a height beyond the marsh to the right and opened flank fire. However, the artillery chased them from this position. Then, Dieskau was wounded twice.

Slowly, the Provincials and their Indian allies were gaining the edge in this firefight. Soon, they began to cross the barricade and to assault French positions. Around 5:00 p.m., the Canadians and Indians finally routed. However, the French regulars under M. de Montreuil formed a rearguard and retired in good order. The pursuit ceased around 7:00 p.m. Dieskau was left behind and captured. He was returned to France only in 1763.

During this combat and the preceding ambush, the losses of the Colonials amounted to 191 killed, 150 wounded and 62 missing while the French lost 132 killed, mainly among regulars and officers, and 184 wounded. Colonel Titcomb was killed while Johnson and Major Nichols were wounded. The heaviest losses of the British occured in Williams' column, Williams himself being killed together with Major Ashley and captains Ingersal, Puter, Ferral, Stoddert, McGimes and Steevens, all Indian officers with 40 Indians and Chief Hendrick.