When Frederick II of Prussia suddenly launched the invasion of Saxony at the end of August 1756, Austria was totally unprepared to oppose him. While the remaining of the Saxon Army were blockaded in the Pirna Country, Field-Marshal Browne hurriedly assembled a relief army at Prague. By the end of September, he had begun his advance upon Saxony with an army of some 60,000 men.

Meanwhile Frederick, leaving sufficient troops to blockade Pirna, hastily reinforced Keith's Corps on the Bohemian frontier and actively sought battle against the Austrian relief army. On September 30, Frederick spotted Browne's camp down by Lobositz (present-day Lovosice) some 16 km away. The Prussian army immediately advanced towards Lobositz. It progressively reached Lobositz, several battalions arriving late at night and bivouacking as they could in the pass between the Lobosch and Homolka Hills. Cavalry horses remained saddled, ready for action. Frederick had assembled an army of 28,500 men:

The same day (September 30), Browne marched from his camp at Budin and joined Major-General Count Guasco in his camp at Lobositz around noon. Browne was at the head of an army of some 35,500 men:

The village of Lobositz lies in a fertile valley along the south bank of the Elbe. The Lobosch, a big hill (420 m.) with three peaks with its southern slopes covered with vineyards and orchards, rises northeast of Lobositz while another smaller hill, the Homolka, rises to the east of the village. Stonewalls and ditches criss-crossed the southern slope of the Lobosch Hill. The 200 m wide gap between the Lobosch and Homolka formed a pass. The road from Welmina to Lobositz ran into this pass along the southern shoulder of the Lobosch, with branches towards many other villages.

The Austrian camp lay along the Elbe River to the east of Lobositz and extended from the pond to Schelchowitz. The centre and the left wing of this camp was covered by the Morellen Stream and pickets were posted across this stream at Sullowitz, Tschischkowitz and Schelchowitz. Browne had established his headquarters in the Castle of Lobositz. The Austrian vanguard, reinforced by 6 grenadier coys some Grenzer troops and later by Hadik Hussars, was encamped to the west of Lobositz with Grenzer advanced parties at Klein Czernosek to watch the road to Aussig; in the vineyards of Lobosch Hill; and, accompanied by hussars in the sand pits to the north of Wchinitz and in Wchinitz proper.

The plain to the south-west of Lobositz was suitable for cavalry movements.

Memorial stone of the Battle of Lobositz in the Chapel of Leitmeritz, photo made by H. Skala

During the night of September 30 to October 1, the Prussian Alt-Braunschweig Infantry realised that the village of Wchinitz was occupied by Austrian troops.

Around 2:00 a.m. on Friday October 1 1756, detachments of Karlstädter-Lykaner Grenzer patrolling the Lobosch briefly skirmished with a party of Prussians (probably Quadt Infantry).

Shortly before daybreak, Jung-Wolfenbüttel Infantry, Joseph Esterházy Infantry and Hildburghausen Infantry along with 11 grenadier coys and Erzherzog Joseph Dragoons set off to reinforce the vanguard on Austrian the right wing.

Around 5:30 a.m., Frederick accompanied by the Prince of Prussia, Prince Ferdinand of Brunswick, the Duke of Bevern, Field-Marshal Keith and the lieutenants-generals of the army went to meet Schmettau.

At 6:00 a.m., the Prussian infantry set off from its camp in two columns.

Around 7:00 a.m. as day broke, a thick mist lay over the plain, extending up to the hill-tops and reducing the field of vision to a mere 100 m. On the Prussian left wing, Grenzers light troops (1 bn of Karlstädter-Lykaner Grenzer under Loudon and 1 bn of Karlstädter-Oguliner Grenzer) could be noticed in the vineyards. They were solidly positioned behind the low stone walls (some 1 m high) parting these vineyards. Austrian horse squadrons could also be seen near Lobositz. That was about all the information that Frederick could glimpse.

In fact, Browne had deployed his left wing behind the Morellenbach, a small brook dammed up to form a series of fish ponds, reservoirs, and morasses. Two narrow bridges, well defended with guns, allowed to cross this brook. Browne's centre extended along a sunken road running from the Morellenbach to the village of Lobositz and defended by Grenzers light troops with large redoubts and batteries. The heavy artillery was placed immediately to the right of the centre. The Austrian cavalry that should have formed the right wing deployed instead in the centre in front of this sunken road, with Cordova Cuirassiers and Stampach Cuirassiers kept in reserve behind the road. The Austrian right wing consisted mainly of infantry and extended from Lobositz to Welhotta (present-day Lhotka nad Labem, part of the city of Lovosice) on the bank of the Elbe.

From what he could see through the heavy mist, Frederick initially thought that Grenzer troops on the Lobosch and the cavalry in the plain were the rearguard of the Austrian army. Fearing that Browne might recross the Elbe and then march on Pirna through Schandau, Frederick ordered an immediate attack. To prevent any surprise attack on his advancing columns, Frederick instructed Prince Ferdinand of Brunswick to occupy the heights to the left and right with the 6 bns of Schmettau's detachment (2 bns each of Alt-Braunschweig, Quadt and Blanckensee).

Around 7:30 a.m., the Prussian vanguard nearly filled the 200 m space between the Lobosch and Homolka. Meanwhile, the infantry of the right wing arrayed in two lines supported by Lieutenant-Colonel Moller's battery (5 x 12-pdrs, 4 x 24-pdrs and 1 x howitzer), took position atop the Homolka. The two lines of infantry of the left wing, under the Duke of Bevern, advanced on the slopes of the Lobosch to chase the Grenzers from the vineyards. The Prussian cavalry initially deployed in three lines on the plain in the centre of the line of battle. 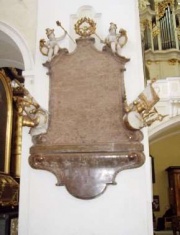 Epitaph of FML Radicati in the Church of Leitmeritz, photo made by H. Skala

The battle opened with an intense artillery duel: the Prussian battery on the Homolka firing at some 10 Austrian cavalry squadrons (around 1,500 men) deployed in the plain in the centre. The Austrian artillery answered by opening fire on the advancing Prussian columns as they debouched between the Lobosch and the Homolka. During this artillery duel, Lieutenant-General Franz Ulrich von Kleist and Major-General Baron von Quadt were mortally wounded and the Austrian General Radicati, commanding the right wing cavalry, was killed by a cannonball. General O'Donnell then assumed command of the Austrian right wing cavalry.

Browne moved his command post to the right leaving command of the left wing to General Kolowrat. Meanwhile, Frederick established his own headquarters on the Homolka.

Three Prussian regiments (Manteuffel, Braunschweig-Bevern and Kleist (?)) from Bevern's left wing made slow but steady progress on the slopes of the Lobosch. Lacy reinforced the Austrian right wing under his command with Browne Infantry and Alt-Colloredo Infantry. 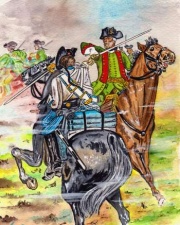 Around 11:00 a.m., the mist persisting, Frederick ordered Lieutenant-General Baron von Kyau, positioned in the centre of his lines, to make a reconnaissance in force of the Austrian line. Kyau, with 3 cuirassier regiments (Garde du Corps, Gens d'Armes and 2 sqns of Prinz von Preußen) advanced through the mist towards the centre. He was supported by the Bayreuth Dragoons. The right flank of Kyau's cuirassiers was soon enfiladed by the fire of the Austrian grenadiers occupying Sullowitz (present-day Sulejovice). The Austrian Erzherzog Joseph Dragoons then charged in the flank of Kyau's cuirassiers which were rescued by the supporting Bayreuth Dragoons. With the help of these dragoons, Kyau pushed back the Austrian cavalry up to the sunken road. The Prussian cavalry was then fired upon with case-shot by the Austrian batteries from Lobositz and with musketry by the Grenzers entrenched in the sunken road. A counter-attack by the Austrian Stampach Cuirassiers and Cordova Cuirassiers finally drove back the Prussian cavalry up to the foot of the Homolka. After this first cavalry engagement, both cavalries took refuge under their guns.

Around 11:30 a.m., the mist finally cleared off and Frederick got his first opportunity to study the Austrian lines. He immediately sent new orders to the Prussian cavalry to stop its assault. However, these orders arrived too late and his cavalry, which had been reinforced with 13 additional cuirassier squadrons (3 sqns of Prinz von Preußen, Leib-Carabiniers and von Rochow), launched a second charge against the Austrian position. Nothing could stop the 59 Prussian squadrons (some 10,000 cavalrymen) in their charge until they came upon the Morellenbach. Austrian batteries entrenched on the opposite side of the brook then opened fire on the Prussian cavalry who was forced to recoil out of range with a loss of several men. Frederick then ordered his shaken cavalry up the Homolka and posted it to the rear where it stood for the rest of the battle.

Meanwhile, Bevern had difficulties to take control of the Lobosch and was obliged to gradually increase his commitment in this quarter, sending 4 additional battalions (Itzenplitz, Grenadier Battalion 3/6 Kleist and I./Münchow) to reinforced the 7 battalions already engaged. Nevertheless, the Grenzers continued to oppose him stubborn resistance.

When Browne realised that he was slowly losing control of the Lobosch, he ordered 6 grenadier companies and 3 battalions (2 from Nikolaus Esterházy Infantry and 1 from Jung-Wolfenbüttel Infantry) from his left wing to join Lacy who sent them to reinforce the Grenzers on the Lobosch. Several Austrian infantry regiments (Kaiser, Kolowrat and Joseph Esterházy) were also concentrated near Lobositz. Browne also tried to advance his left wing to Sullowitz but the intense fire of the Prussian artillery from the Homolka soon brought this attempt to a stop and set several houses afire inside Lobositz.

Around 1:00 p.m., Frederick was doubting the issue of the battle. He decided to personally quit the battlefield, leaving overall command to Keith. Before his departure, he ordered Bevern to renew his assault on the Lobosch and Keith to support this assault as much as he could. Bevern finally managed to take control of the Lobosch.

Keith then organised the decisive attack on Lobositz. To do so, he ordered the second line of his left wing to march up and join with the first. Meanwhile his right wing redeployed itself into a single line and extended north to cover the Lobosch as well.

Heavy combat at one of the gates of Lobositz - Source: Collection of Harald Skala

Once master of the Lobosch, the Prussian left wing, led by Bevern, moved out of the vineyards and took position some 600 m from Lobositz. Browne's battalions soon came to close grips with it.

After three more hours of fighting, the Austrians were finally driven into Lobositz. Firing had been so intense that most Prussian infantrymen had exhausted their 90 cartridges and had to continue fighting with bayonets and butt-ends. The Grenadier Battalion 5/20 Jung-Billerbeck was the first Prussian unit to force its way into Lobositz, soon followed by Braunschweig-Bevern Infantry and Grenadier Battalion 3/6 Kleist. The streets of the town were too narrow to accommodate any new battalions sent as reinforcements by Browne. The Prussian grenadiers set the village afire, forcing Austrians troops to evacuate it. The whole Austrian right wing was now rapidly disintegrating, most troops retired upon Welhotta, some even plunged into the Elbe, a good few of them drowning.

Browne quickly reacted and pushed forward his centre and left wing, numerous battalions still fresh, to interpose between the chasing Prussians and the fugitives. The Prussian infantry alone could not resume pursuit on such terms and the Prussian cavalry was far to the rear on the Homolka.

By 3:00 p.m., firing had ceased almost everywhere. Lobositz was then occupied by II./Alt-Anhalt and I./Zastrow.

The battle had lasted 7 hours, the last 4 of it very intense. Frederick had lost 3,308 killed and wounded. The Prussian Major-General Baron von Quadt died of his wounds on October 3 while Lieutenant-General Franz Ulrich von Kleist died of his wounds in Dresden on January 14 1757. Among the Prussian units, the following suffered particularly:

For his part, Browne lost 2,863 killed and wounded, 418 men taken prisoners, three 3-pdr guns and two standards. This was far from a decisive victory for Frederick.

Artillery under General Feuerstein (deployed in several locations on the battlefield)