In September 1757, the Austrian Army, under Prince Charles de Lorraine, was following up Bevern's Prussian Army in its retreat towards Silesia.

On Tuesday September 6, Prince Charles de Lorraine finally decided to attack the corps of General Winterfeldt at Moys, since it was almost isolated from Bevern's Army, on the right bank of the Neisse River. The attack was confided to General Nádasdy. 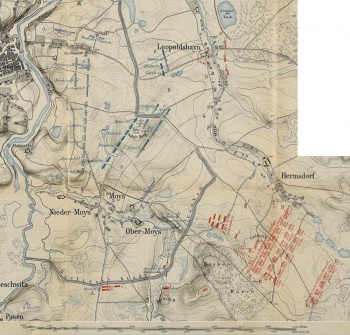 Map of the combat of Moys on September 7 1757
Source: Kriege Friedrichs des Grossen, volume III by the German Grosser Generalstab

Winterfeldt had deployed his force with his right forming an angle from the Neisse towards the Jäkelsberg and his left extending from Leopoldshayn to the Neisse. The Jäkelsberg was at the apex of the angle formed by the right wing. Artillery had been planted on this hill which was also covered by fieldworks occupied by two grenadier battalions.

At 1:00 a.m. on Wednesday September 7, Nádasdy's force began its march.

Towards 6:00 a.m., Nádasdy's force deployed in two lines preceded by a screen of light troops. The right wing was anchored on the village of Hermsdorf while the left extended up to the mill of Moys on the Rothswasser. The Grenzer light troops were subdivided into three corps:

At about 7:30 a.m., the Duke of Arenberg, who had left the camp of the main army at Görlitz at 8:00 p.m. the previous day, finally arrived at Schöberg where he made his junction with Nádasdy's force which could now begin its advance on Moys. In the centre, the three columns of infantry were under the command of Lieutenant-generals Clerici (left), Esterházy (centre) and Wied (right). Meanwhile, the Sachsen-Gotha Dragoons, along with the Jung-Modena Dragoons and the Saxon chevaux-légers were ordered to cover the right flank of the advancing infantry columns.

To the exception of the troops posted on the Jäkelsberg on the extreme right, General Winterfeldt had no advanced posts in front of Moys. Indeed, all Prussian troops were kept close to the camp for fear of desertion. Therefore, when Nádasdy's force started its advance on their position, the Prussians initially saw nothing but parties of Grenzers and hussars on their extreme right towards the Neisse. They mistakenly considered them as mere foragers of Nádasdy's Corps. Accordingly, they only fired a few guns at them and ordered the grenadiers occupying the Jäkelsberg to take up their arms. Meanwhile, Nádasdy's columns were continuing their advance unnoticed along sunken roads through a countryside covered by woods and ravines.

At about 9:00 a.m., the Prussians began to see regular Austrian units advancing on Kuhna and Hermsdorf. Carl von Bevern reported the fact to General Winterfeldt who could not be convinced that the Austrians were preparing an attack. Meanwhile, the Saxon cavalry along with hussar and Grenzer regiments deployed between Leopoldshayn and Hermsdorf to fix the Prussian left.

At 11:00 a.m., the Austrian infantry finally deployed in the plain. The Austrian artillery then opened fire and Nádasdy ordered the Grenzers of the left wing supported by Arenberg's grenadiers to storm the Jäkelsberg defended by three Prussian battalions. The Austrian Grenzers and grenadiers assaulted the hill in three columns and successfully turned the entrenchment, putting the Prussian defenders to flight and capturing the camp along with three guns and one colour. Meanwhile, the grenzers positioned on the extreme left wing assaulted and captured the village of Moys.

Then Nádasdy Hussars, which were posted near the Kaltwasser brook to cover the left flank of the infantry columns, fell on the Prussian troops retiring from the Jäkelsberg, capturing three colours. Meanwhile, the pursuing Austrian grenadiers even reached the camp of the Prussian hussars to the rear of the Jäkelsberg.

Winterfeldt and his staff were completely surprised by the attack. Indeed, they were not at Moys but at Görlitz in conference with Bevern. Winterfeldt was convinced that all the manoeuvring of the Austrian was but a demonstration in force. Finally realizing that it was a serious attack, Winterfeldt left the conference. All generals joined their brigades and set their troops in marching orders. Winterfeldt ordered Kannacher with the five nearest battalions (Grenadier Battalion 24/34 Anhalt, Manteuffel Infantry and Tresckow Infantry) to follow him at double-quick pace, marching by their right in columns. After the departure of Winterfeldt, Zieten was left in command of the main body.

However, by this time, the troops of the first line of the Austrian centre (de Ligne, d'Arberg, Platz, Sprecher and Sachsen-Gotha infantry regiments) had deployed in line and were ready to launch a second assault on the Jäkelsberg. They finally drove off the Prussians from the Jäkelsberg after a fierce fight that lasted about an hour, capturing Count Anhalt-Dessau, Major-General Kannacher, a lieutenant-colonel and several others officers along with three colours and one 16-pdr gun.

Meanwhile, at about 1:00 p.m., Winterfeldt detached two infantry regiments and some cavalry to seize the villages of Leopoldshayn and Hermsdorf on his right. These regiments deployed near Leopoldshayn and attacked the village defended by colonel Vela with Grenzer troops from the Karlstädter-Lykaner and Banal-Grenzinfanterieregiment nr. 1. The Grenzers were also supported by Lieutenant-General Kálnoky at the head of 15 hussar squadrons (Kaiser Franz I, Kálnoky and Dessewffy). After a fight that lasted about an hour, the two Prussian regiments were obliged to retire to the heights alongside the Neisse in front of the town of Görlitz where they rallied under the cover of the Prussian artillery deployed on the opposite bank of the river.

At about 2:00 p.m., the Prussian finally abandoned the Jäkelsberg. After the capture of this hill, Nádasdy reinforced it, deploying his grenadiers in several lines and planting some guns on the heights. However, satisfied by the results, he did not try to exploit his advantage further.

During the afternoon, the Prince of Bevern reinforced Winterfeldt with three additional battalions.

Until 5:00 p.m., both forces cannonaded each other without engaging in any significant action.

Winterfeldt was killed during the fight.

As mentioned before, several Prussian officers were captured during this action. In addition, 333 troopers were taken prisoner and 392 others deserted during the following days. The Austrian army lost 177 men while 1,311 were wounded and 87 reported missing.

This combat had no major consequences on the events. The Prussians set fire to their camp at Moys and retired from the battlefield with a loss of about 800 killed and wounded. The Austrians captured 5 guns (2 x 12-pdrs, 1 x 6-pdrs, 2 x 3-pdrs) and 7 colours. They lost about 3,000 men in this action.

On September 10, a few days later, Bevern finally retreated to Silesia but this was mainly due to a lack of supplies.

N.B.: the above figures exclude the reinforcements, the grenadier reserve under Sprecher and troops operating on the other bank of the Neisse.

N.B.: Two more cavalry brigades are reported by Horace St-Paul as part of Nádasdy's Corps but do not seem to be present at the combat. We have not found information about their location during the engagement. These are:

Reinforcement sent at 4:00 p.m. from the Main Army at Görlitz

In command at the moment of the attack: Major-General Prince Carl von Bevern

(*) the identity of these generals is deducted from the Prussian Ordre de Bataille Générale of August 15 for the army in Saxony. Most generals of Winterfeldt’s Corps where absent when the army was alarmed.