The campaign lasted from June to December 1757

After his defeat in the Battle of Kolin, Frederick II of Prussia had to renounce to the invasion of Bohemia, to lift the Siege of Prague and to gradually retire into Northern Bohemia where he planned to "eat the country" before retiring to Lusatia or Silesia until mid or end of August.

After Daun's victory at Kolin]] on June 18, Daun and Prince Charles did not make their junction at Sworez (present-day Skvorec/CZ) near Prague before Sunday June 26. Furthermore, they made no attempt against the retreating Prussian armies, excepted sending out Loudon with of 4 grenadier coys, 2,000 Grenzer light troops (Karlstädter-Ottochaner, Karlstädter-Oguliner and Banal-Grenzinfanterieregiment nr. 2) and 600 men of Hadik Hussars on the Paskopol Highway (present-day Paškopole, a pass between the hills of Milešovka and Kletečná).

On June ??, Loudon's Corps attacked a Prussian detachment of 2,000 men near Schischitz (present-day Žiželice/CZ). This detachment was trying to effect a junction with Keith at Welwarn (present-day Velvary/CZ). Loudon took 15 officers and 246 troopers as prisoner of war, several Prussians were killed and wounded.

On June 27, Loudon's Corps attacked a Prussian convoy of 100 wagons escorted by 200 recruits between Lobositz (present-day Lovosice/CZ) and Wellemin (present-day Velemín/CZ). The wagons of the convoy were quickly formed in a wagenburg. One of these wagons transported General Manstein who had been wounded at Kolin. Manstein bravely defended himself, refusing to surrender, and was killed during the fight. The rest of the defenders finally surrendered as prisoners of war (Colonel Kleist and the Marquise de Varenne, along with 8 other officers and 146 privates). Loudon also captured all their equipages including the military chest of Keith's Army.

At the end of June, Loudon attacked a Prussian detachment near Welwarn, took 160 as prisoner of war and captured one bridge-train.

To Frederick's surprise, the Austrians had finally chosen to move upon the Prince of Prussia.

Meanwhile, Frederick continued four weeks at Leitmeritz with his army parted this way, waiting to find out which theatre of operation would first require his intervention.

Prince of Prussia retreats in front of superior forces 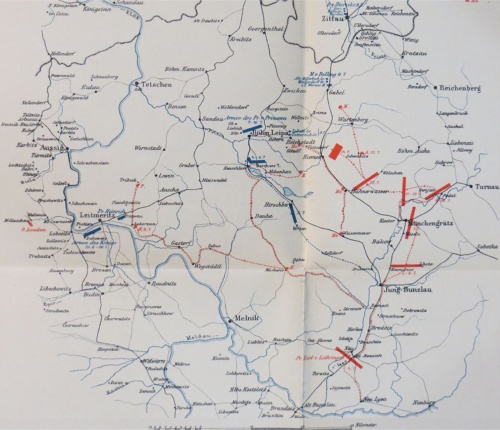 Frederick considered that the new position of the army of the Prince of Prussia at Hirschberg now allowed the two Prussian armies to easily support each other. He also advised the prince that a retreat towards Silesia was no more executable and that Lusatia remained the only possible direction. He thought that both Prussian armies could live of the land in Bohemia till mid-August. Finally, he suggested to select an appropriate position at Gabel, Grottau (present-day Hrádek nad Nisou/CZ) or Reichenberg (present-day Liberec/CZ) to cover Lusatia which could not be covered from Zittau.

In the night of July 12 to 13, Frederick sent orders to the Prince of Prussia to send a detachment to reinforce the defence of Tetschen.

Harald Skala for information on the Saxon cavalry during this period