The raid took place in October 1757

On September 13 1757, when the main Austrian army passed the Queiss at Lauban (present-day Luban/PL) to advance further in Silesia, Prince Charles of Lorraine left a force of 15,000 men (11 bns and 6 cavalry rgts) under FZM Baron Marschall at Lauban to protect Lusatia.

On September 15, another Austrian corps of 7,000 men under FML Count Andreas Hadik was posted at Radeburg to cover Lusatia and Bohemia against a possible offensive of Frederick II. This corps was subordinated to Marschall. Prince Charles asked Hadik to inform him on the feasibility of an endeavour against Berlin.

Indeed, Frederick's advance towards the Franco-Imperial Army in Saxony and Bevern's slow retreat towards Breslau (present-day Wrocław) in Silesia had opened a wide gap in the Prussian lines. Furthermore, terror had already spread in the Mark, the Land Militia were not yet properly trained and Frederick still hesitated on his plan of action. Therefore, Hadik gave a positive advice.

The Austrian high command resolved to take advantage of the situation and to launch a raid on Berlin. The forces destined to this expedition were placed under the command of Hadik.

On September 18 at Wurzen, Prince Moritz of Anhalt was informed by Minister von Borcke that Hadik was marching with approx. 13,500 men by Radeburg and Grossenhain towards Kossdorf. Small Austrian parties were raiding up to Jüterbog so it was impossible to determine if Hadik's Corps was advancing on Torgau, Wittenberg or against the Mark.

Preparation of the expedition

Marschall, who was still posted with his corps at Lauban to protect Lusatia, detached 1,200 foot and 800 horse (under Colonel Count Gourcy of Prinz Savoyen Dragoons) from his corps and from the garrison of Zittau to join Hadik's Corps.

On September 25, the first part of Marschall's detachment (600 foot and 800 horse) set off from Lauban and marched to the assigned rendezvous at Elsterwerda.

On September 30, FZM Marschall marched to Görlitz with his entire corps to cover Hadik's raid. However, Hadik fell ill and the operation was postponed to October. 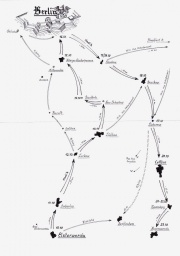 Manoeuvres during the raid on Berlin in October 1757
Copyright: Harald Skala

During the night of October 15 to 16, Hadik made an indirect approach on Berlin, leaving the main road and marching through the "Royal Forest" by Schmöckwitz.

In these days, the City of Berlin included the inner quarters of Berlin, Kölln, Friedrichswerder, Dorotheenstadt (aka Neustadt) and Frierichstadt; and the suburbs of Kölln, Köpenick, Stralau and Spandau. The suburbs were surrounded by a 4.40 m. high wall. The garrison consisted of 6 bns of poor value for a total of 5,521 men:

The recently raised Kurmark Land Militia Regiment von Borck (3 bns) was supposed to take up quarters in Berlin but were not yet arrived. Rochow unsuccessfully tried to equip some recruits destined to Bayreuth Dragoons (already included in the depot of recruits above) with horses taken from breweries.

On October 16, Prince Moritz reached Jüterbogk and Prince Heinrich marched from Lützen with the troops to join Frederick.

On October 16, with no cavalry, Rochow was forced to send out 500 of Loen Fusiliers under Lieutenant-Colonel von Zitzewitz to locate the Austrians. As this small detachment came out of the city, it saw Austrian hussars deployed south of the Silesian Gate and Kottbus Gate. They took refuge in the forest before Zitzewitz could engage them. He returned to Berlin and reinforced the troops defending the gates.

At about 11:00 a.m., Hadik skilfully emerged at the Silesian Gate of Berlin with about 3,000 men and four guns and summoned the town to give a ransom of 300,000 thalers. The Prussian garrison refused to accede to his demand.

In Berlin, rumours spread that Hadik's Corps was just the vanguard of Marschall's Army estimated at 15,000 men.

Ujházy with his 300 hussars was supposed to make a diversionary attack on the Potsdam Gate but he remained in the woods near the Academy.

Hadik who had prepared for an assault on the town then launched four Grenzer companies under Colonel Ried against the Silesian Gate and the bridge on the Spree. Ried was supported by two 6-pdr guns in front of the Silesian Gate, between the walls and the wet ditch.

Meanwhile, Hadik forced his way into Berlin through the Silesian Gate with 1,400 men (700 grenzers, 300 hussars and 400 horse), capturing approx. 200 men of Loen Fusiliers.

Six Prussian coys from IV./Garrison Regiment No. VII Lange and VI./Garrison Regiment No. VII Lange had taken position on the place between the Silesian Gate and the suburb of Köpenick. They immediately engaged the Austrians. They wheeled right to face north-eastwards and then wheeled again to fire in the left flank of the Austrians. Major-General Babocsay summoned the 6 coys to surrender but the defenders under Major von Tesmar replied with a salvo. Babocsay was mortally wounded during this engagement.

Hadik rapidly rode against the left flank of the Prussian infantry with his hussars and horse while Ried at the head of Grenzer light troops attacked the Prussian right flank at the point of the bayonet. The Prussians were soon defeated.

With the Silesian Gate lost, the detachment of Loen Fusiliers defending the Kottbus Gate retreated, closely followed by the Austrian cavalry who captured several of them.

Now the suburb of Köpenick was in Hadik's hands.

The Prussians defending the bridge giving access to the suburb of Stralau gave way at the first shots of the Austrian artillery. Hadik sent 3 Grenzer coys to occupy it. However, the draw-bridge had been lifted and they could not enter into Berlin.

For the defence of the city gates, the Prussians had lost 5 officers (including Lieutenant-Colonel von Lange and Major von Tesmar) and 93 men killed; 140 men wounded; and 12 officers; 427 men taken prisoners; and 200 men who deserted to the enemy.

Rochow, who was overestimating Hadik's force, marched off thereupon for Spandau with the royal family and effects.

By 6:00 p.m., there were no Prussian troops in Berlin and Hadik was master of the suburb. He encamped outside of the city walls.

Hadik remained in the suburb for about twelve hours and finally obtained a ransom of 235,000 thalers (among which 25,000 thalers paid directly to the troops to avoid plundering).

Lieutenant Count Olivieri of Prinz Savoyen Dragoons received the honour to bring the report about the occupation of the suburbs of Berlin to Field-Marshall Daun operating in Silesia.

On October 21, Hadik arrived at Spremberg where he ordered a day rest.

On October 22, General Seydlitz's hussars made contact with Ujházy's detachment near Elsterwerda. The Austrians lost 20 men and 50 other were captured by the Prussians.

In Berlin, redoubts were built in front of the city gates and artillery brought from the arsenal to equip them.