Difference between revisions of "1757 - Prussian invasion of Bohemia – Invasion"

After a careful preparation, King Frederick II of Prussia was ready to enter into Bohemia. His armies would converge on Prague from several directions.

In the night of April 20 to 21, Würben's 2 bns marched by Engelsberg (present-day Andělská Hora) and spent the night on a hill near Christofsgrund (present-day Kryštofovo Údolí), in preparation to make a junction with Königsegg's left wing. Meanwhile, Maquire marched on Kratzau with the rest of his corps, leaving only 3 bns (one bn of each of the following rgts: Königsegg Infantry, Andlau Infantry, Batthyányi Infantry) under Major-General O'Kelly on the heights between Ringelshain (present-day Rynoltice) and Grottau to secure the pass leading to Zittau.

On the night of April 22 to 23, Maquire's Corps set off from Oschwitz and reached Königsegg's camp near Liebenau on April 23 at 2:00 a.m.

During the night of April 23 to 24, Hadik retired through the mountains towards Lobositz. A Prussian detachment (3 bns, Freikorps, Fussjägers and 5 sqns of Szekely Hussars) occupied the pass of the Pascopol unopposed.

In the night of April 26 to 27, the 3 first bns of the Prussian vanguard finally arrived in Jungbunzlau.

In the night of April 27 to 28, Zieten's exhausted detachment had to halt at Charwatetz. Important Austrian magazines were captured at Charwatetz and Budin.

Such was the speed of the advancing Prussian columns that considerable portions of the supplies, gathered in the Austrian magazines fell into their hands. These provisions were so important that they amounted to three months of supplies for the entire Prussian Army.

At the beginning of May, the Austrian FML Duke of Arenberg gave order to the 8 infantry rgts and 3 cavalry rgts posted at Eger (present-day Cheb) to take position on the road between Plan and Eger. Alt-Wolfenbüttel Infantry (3 bns) and Harsch Infantry (3 bns) were left behind at Eger as garrison.

In the night of May 2 to 3, Schwerin, informed that the Austrian had evacuated the left bank of the Elbe and left a small garrison in the Castle of Brandeis, sent 2 howitzers and 20 pontoons to Altbunzlau. Before daybreak, Lieutenant-General von Fouqué arrived at Altbunzlau with 6 bns (Lestwitz Infantry, Kurssell Fusiliers and Fouqué Fusiliers) and 5 sqns (Katte Dragoons). However, the Austrians had already evacuated the Castle of Brandeis.

The Weisse Berg was on the western side of Prague while the Hradschin lied on the slope or shoulder of the Weisse Berg, a good way from the top. The Hradschin had a web of streets rushing down from it till they reached the bridge over the Moldau. From the bridge, the streets became level and spread out to right, left and eastward across the river up to the Ziskaberg. The distance from Ziskaberg top to Weisse Berg top was about 8 km, from the Hradschin to the foot of Ziskaberg (north-west to south-east) it was about 4 km. Prague stood nestled in the lap of mountains and was not in itself a strong place in war. However, the country round it with the Moldau ploughing its passage through the heights was difficult to manoeuvre in. Moldau Valley came straight from the south, crossed Prague and made a big loop of horse-shoe shape. It then proceeded straight northward towards the Elbe. It was narrow everywhere, especially fairly north of Prague.

Frederick's first problem was to make his junction with the combined columns of Bevern and Schwerin. This junction could not take place south of Ziskaberg with Austrians positioned on the high grounds. Supplies came by boat on the Elbe up to Leitmeritz which was garrisoned by the Prinz Friedrich Wilhelm von Preußen Fusiliers (another former Saxon regiment forcibly incorporated into Prussian service). From Leitmeritz, supplies were transported by wagon.

In the night of May 4 to 5, Lieutenant von Borcke, Schwerin's courrier, was intercepted and captured by Colonel Fürst Lobkowitz. Meanwhile, Frederick was still waiting to know if Schwerin had effectively managed to pass the Elbe. 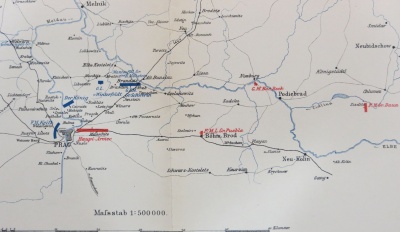 Map showing the positions of the Austrian and Prussian corps on May 5 1757.

In the night of May 5 to 6 at 2:00 a.m., Prince Moritz set off from Keith's camp with 4 grenadier bns and fourteen 24-pdr guns, followed by wagons transporting 35 pontoons. The infantry lost its way but finally reached the Moldau.

After the junction of Schwerin's and Frederick's armies, a long and heavily contested struggle ensued, the Battle of Prague, that the Prussians finally won. However, most of the Austrian Great Army, 50,337 men strong (including 5,792 Grenzer light troops), took refuge in the City. Meanwhile, Daun reached Podiebrad where he let his troops take a few hours rest after an exhausting night march. He then planned to advance to Bömisch-Brod but did not march farther than Sadska (present-day Sadská), only 4 hours march from Prague. The advanced elements of his army, under FML Count Puebla, reaching Auwal. Near Bechowitz, they saw the victorious Prussians advancing. When Daun heard of the results of the battle, he retired to Podiebrad.

The very same day (May 6) at 4:00 a.m., Major-General Baron Beck reached Mochov with his body of light troops (4,000 Grenzers and 350 hussars) to cover the right flank of Daun's Army. There, he received intelligence that the town and the castle of Brandeis had only a weak Prussian garrison (II./Manstein Fusiliers, a former Saxon rgt, under the command of Lieutenant-Colonel Mardefeld with 2 guns and Manteuffel Grenadiers covering the bridge). He immediately decided to attack this town and to destroy its bridge. At 5:00 a.m., Beck appeared in front of Brandeis and unsuccessfully summoned the garrison to surrender. He then launched the I./Slavonisch-Brooder Grenzer led by Colonel Brodanovic against the right gate and the II./Warasdiner-Creutzer Grenzer led by Lieutenant-Colonel Baron Riese along with one battalion of the Karlstädter-Szluiner Grenzer led by Major Passée against the left gate. During this time, Lieutenant-Colonel Mathesen with the II./Slavonisch-Brooder Grenzer and Lieutenant-Colonel Miljevic with the I./Slavonisch-Gradiskaner Grenzer made themselves master of the town and destroyed the bridge over the Elbe. The Prussian Lieutenant-Colonel Mardefeld was taken prisoners with most of the garrison (374 men of II./Manstein Fusiliers, 4 officers and 252 men of other units including 80 wounded). In this action, Beck also captured 5 colours, 2 guns, 3 ammunition wagons. He also freed 3 officers, and 104 cuirassiers, dragoons and hussars who had been taken prisoners by Schwerin a few days earlier when he had crossed the Elbe. Beck lost lost only 20 men killed and 20 wounded. Only 4 officers and 120 men of Manteuffel Grenadiers under Major von Momma managed to escape. In the evening, Beck returned to Mochov.

Still the same day (May 6), the Prussian siege artillery sent from Magdeburg on the Elbe reached Pirna where it was transferred on smaller boats.