The surrender of the city took place on November 25 1757

Just before midnight on November 22 1757, after its defeat in the battle of Breslau (present-day Wrocław) in Silesia, the Prussian army under the Prince of Braunschweig-Bevern retreated. Indeed Bevern was obliged to abandon Breslau to its fate and he retreated under the cover of night.

In the evening of November 22, the garrison of Breslau counted 132 officers, 358 NCOs and 3,738 men. However, when he retreated, Bevern left a total of 11 bns to defend the city. Bevern then went further and encamped near Protsch (present-day Pracze Widawskie).

Lieutenant-General Johann Friedrich von Katte, who had been entrusted with the defence of Breslau, did not take any measure to hinder the preparations of the Austrians for the bombardment of the fortress.

In the morning of November 23, G.d.C. Nádasdy summoned Katte to surrender the place.

Many inhabitants of Breslau tended to support Austria. Nádasdy soon learned about this situation.

On November 23, the burghers of Breslau asked to surrender the place to avoid bombardment.

In the evening of November 23, Nádasdy summoned the placed for a second time. 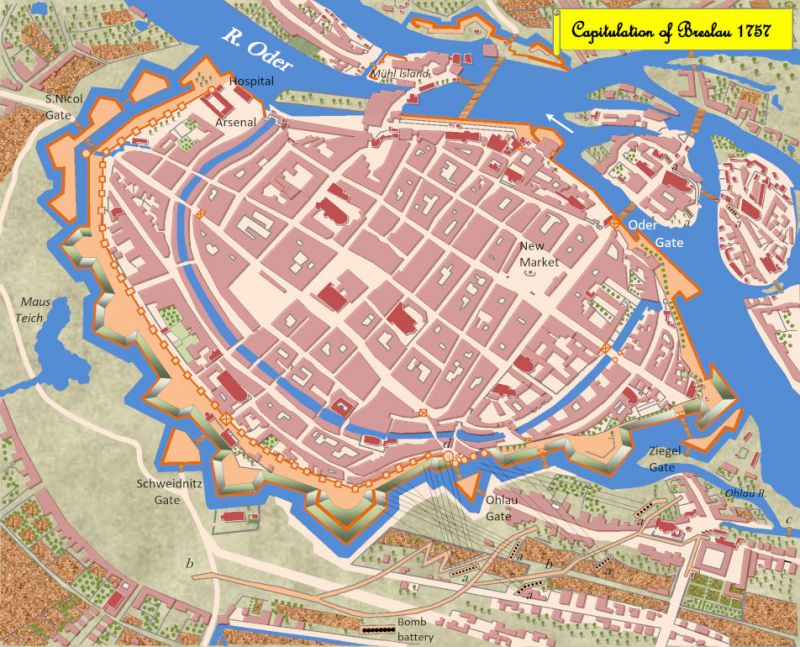 Map of the first siege of Breslau in November 1757.

a Austrian batteries.
b Approaches.
c Dyke made by the Prussians at Ohlau to dry the moat.
d Tower and powder magazine, which exploded when hit by a bomb, widening the breach and forcing the garrison to capitulate.

In the night of November 23 to 24, Grenzer light troops launched two unsuccessful attacks against the ravelin.

In the morning of November 24 around 3:00 a.m., Bevern reconnoitred the advanced posts of his army accompanied by only one servant. In the foggy morning he stumbled into an Austrian outpost guarded by a party of Warasdiner-Creutzer Grenzer under Captain Katinčiċ and was captured.

Early on November 24, a battery established in the suburb of Ohlau opened against the ravelin but remained silent when the Prussian artillery replied.

On November 24 at 8:00 a.m., Nádasdy summoned the place a third time. Katte sent Captain von Ahlefeldt to the Prussian camp at Protsch, informing the commanders that favourable conditions were offered for a prompt surrender and asking to receive instructions as to how to react to the repeated summons of the Austrians. Lestwitz dictated to Major-General von der Goltz terms to propose for the capitulation of Breslau. In Lestwitz's opinion, Breslau was not in a position to withstand a siege. One of the articles specified, that the Austrians should allow a period of 10 to 14 days to receive the acceptance of Frederick II. He then handed this proposal to Captain Ahlfeld who brought it to Lieutenant-General Katte with instructions not to capitulate before November 25 at 10:00 a.m.

When Bevern's staff was informed of his capture, it became necessary to choose a new commander for the army. The eldest officers, Lieutenant-General Friedrich Wilhelm von Kyau and Lieutenant-General Johann Georg von Lestwitz assumed command.

A few minutes after the departure of Captain Ahlfeld from the camp of Protsch, a courier arrived with a letter from Frederick, dated November 21, instructing Lieutenant-General Lestwitz to take command in Breslau. Lestwitz (at that time, a 70 years old man suffering from fresh wounds received in the Battle of Breslau) went to Breslau and Lieutenant-General Kyau marched with the remains of the army (approx. 18,000 completely frustrated and demotivated men) to Schleditz (unidentified location) according to a previous order issued by Bevern before his capture.

In the afternoon, Katte gave orders to fire only in response to the fire of the Austrian batteries.

Rumours of an imminent surrender spread in the place. A flour magazine was plundered and there was unrest among the inhabitants. Soldiers seized brandy in the monasteries and desertion became out of hand.

Around 3:00 p.m., Lestwitz finally arrived in Breslau. He found the place in a total chaos. The mob had plundered the magazines; the citizens, fearing bombardments, asked for immediate surrender. The morale of the garrison, consisting mainly of Silesian and Saxon troops, was very bad. The outposts on the Ohlau and Ziegel gates had already been deserted. Furthermore, there was no suitable artillery unit and improper ammunition for the 98 guns. Only 18 artillerymen were fit for duty.

As early as 4:00 p.m., an Austrian negotiator, Colonel Walther von Waldenau asked to meet Lestwitz and pressed for a decision. Lestwitz sent Major von Lüderitz to Nádasdy to ask for a delay of six days to allow him to send a messenger to Frederick.

In the evening, without waiting for Lüderitz's return because the Austrians threatened to start bombarding the place, Lestwitz transmitted the capitulation conditions proposed by Katte to the Austrian envoys.

At midnight, Nádasdy informed Lestwitz that he was willing to allow the garrison to freely retire to Glogau with arms and colours on the condition that these troops would not serve against Austria and its Allies for the rest of the war. Lestwitz rejected this last condition.

On November 25 at 3:00 a.m., Lestwitz accepted the terms of capitulation offered and surrendered without firing a gun. He immediately surrendered the Schweidnitz Gate and the Oder Gate. Thus sealing the fate of the fortress. Several Austrian officers entered into Breslau.

In the morning of November 25, the first Austrian troops entered into the city. By 6:00 p.m., the last Prussians troops left. However, this garrison was mostly composed of Silesian recruits who deserted the Prussian cause. Thus from a garrison which originally consisted of 11 battalions (4 regiments, each of 2 battalions, and 3 other battalions) for a total of 132 staff officers, 358 NCOs and 3,629 men; only 20 staff officers, 151 NCOs, 12 drummers and 316 men withdrew from Breslau with poor Lestwitz. A battalion of Jung-Braunschweig-Bevern Fusiliers (a former Saxon regiment) who still counted 21 staff officers, 50 NCOs, 16 drummers and 660 privates massively deserted. Only 9 officers, 1 NCO, 1 drummer and 2 privates remained loyal to Prussia. According to other sources, 2 lieutenants and 1 engineer-lieutenant carried the colours of that battalion because only 1 NCO was still with the battalion. Soldiers of this battalion who had their post on the main market did not wait, abandoned their muskets and fled. The children played with muskets and regimental drums afterwards. The Prussian garrison had abandoned 98 guns and endless magazines and stores of war in Breslau.

The Austrians garrisoned Breslau with 6,000 men under FML Baron Sprecher.

On November 25 at Naumburg an der Queis, Frederick, who was on the march to come to the relief of Bevern's army, was informed of the defeat of Breslau (but not of the capture of Bevern). He immediately sent two letters to Bevern. Kyau received the first one on November 26 at 7:30 p.m., the second at 10:00 p.m. the same day. In both letters, Frederick stressed the importance of Breslau, forbidding to surrender the city under all circumstances...

For his part, Kyau had already sent a letter to the king on November 24 to inform him of the capture of Bevern and of the march of the army to Schlebitz and further to Glogau (present-day Glogow) due to previous order issued by Bevern before his capture.

On November 27 at 5:00 p.m., Kyau sent another letter to Frederick to inform him of the reason of his march to Glogau, insisting that this was an order given by Bevern. Kyau also stressed the necessity to feed his troops which were starving. Finally, Kyau mentioned that many soldiers were deserting and that his rearguard was constantly skirmishing with FML Beck's troops.

On November 28, upon his arrival at Guhrau (present-day Gora), Kyau received a new message from the king informing him that he and the other generals would be arrested and court-martialed. Lieutenant-General von Zieten replaced Kyau as commander of the army.

On February 9 1758, Kyau, Lestwitz and Katte were court-martialed. Field Marshal Moritz von Anhalt was appointed president of the court-martial. Among the members of the court were Lieutenant-General Forcade, Prince Ferdinand of Prussia, Prince Eugen of Württemberg, Major-General von Geist. The court sentenced Katte to one year of prison, Lestwitz to two years and Kyau to 6 months. On March 11 1758, Frederick approved the judgement.

Kyau was imprisoned at Schweidnitz. On December 27 1758, he had a stroke. Frederick transmitted his wishes of speedy recovery through the commander of Schweidnitz, Major-General von Zastrow and personally visited Kyau afterwards. Kyau died at Schweidnitz on March 30 1759.