Since the beginning of his winter offensive in Western Germany in February 1758, the Allied Army under the command of Duke Ferdinand of Brunswick had first pushed back the French Army to the Rhine. Then, at the beginning of June, Ferdinand had led his army across the Rhine and initiated a campaign on the west bank of the Rhine and he was now trying to pin the French Army against the Rhine.

On June 23, Ferdinand, now some 70 km on the west side of the Rhine, found the French drawn up in battle order at Krefeld. The French army, under the Comte de Clermont, counted some 47,000 men while Ferdinand had 33,000 men. 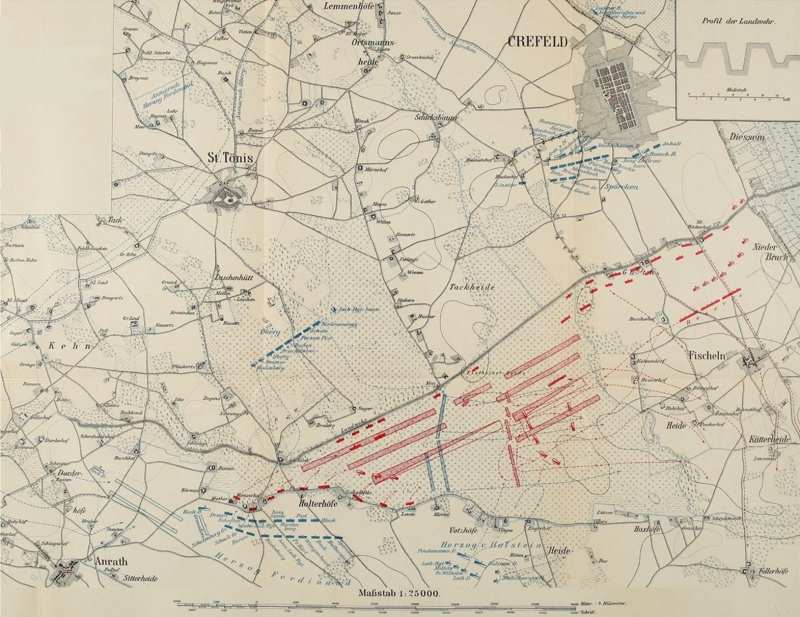 The French positions at Krefeld were very advantageous. The French right wing extended towards a very thick wood having in its front the village of Ravensgät (unidentified location) and the town of Krefeld. The village of Sankt-Tönis covered the front of the left wing which extended up to Anrath and another thick wood. These lines were covered by a thick rampart surrounded by two wide ditches. Only a few passages existed for communications. All roads leading to these lines were bordered with trees and the countryside was covered with properties separated by canal-ditches, osier-thickets, hedges, farm-villages, peat-bogs... An open plain extended between these lines and Krefeld. A frontal attack seemed impossible while the French right flank was covered by a large marsh and the left flank extended over an intricate ground as previously described.

Ferdinand planned to outflank the French left wing with his own corps winding itself round and bursting in upon Clermont's rear. Oberg was to support him with diversionary attacks on the passages of Stoeken (unidentified location) and Hückelsmay. Meanwhile, Spörcken had to mislead Clermont in thinking the threat was to his right and to contain the French army until the outflanking movement had succeeded.

On June 23 at 4:00 a.m., the Allied Army began to move. The right wing advanced in 2 columns to Sankt-Tönis, the left on the plain leading to Krefeld. Ferdinand, the Hereditary Prince of Brunswick and Holstein assembled on the Heights of Sankt-Tönis to observe the French positions. Ferdinand then resolved to march to the right and to attack the French left wing in the villages of Vorst and Anrath. He also ordered Spörcken to make diversion and to send Lieutenant-General Oberg with 6 bns (Chevallerie, Druchtleben, Kielmannsegg, Schele, Reden and the Fusiliers) of the second line, Bremer Cavalry Regiment with the Hanoverian Garde du Corps and 6 x 12-pdrs in a single column towards Sankt-Tönis. Meanwhile, Spörcken marched in two columns along the marsh of Kleud.

At 8:00 a.m., Ferdinand put himself at the head of the grenadiers of the right wing and took the road leading to the village of Vorst. He then left the village on his right and with great difficulty moved in two columns against Anrath through scrubs, thickets, hedges and ditches.

At 10:00 a.m., Clermont was informed that several Allied columns were in sight, marching up to his camp. He immediately deployed his army in front of his camp. His right extended to the wood at Fischeln from where it lined the Landwehr dyke as far as Ant Stock. The dyke was occupied by the infantry. In the centre, behind the infantry, Clermont deployed two lines of cavalry. A reserve of Carabiniers and dragoons formed en potence on the left wing; the Grenadiers de France and the Grenadiers Royaux were kept in reserve behind the right wing and Navarre Infanterie in reserve behind the centre. He also posted 4 bns towards Anrath which was occupied by 200 foot and 200 horse of the Légion Royale. Finally, he threw 800 men (infantry, cavalry and hussars) in the village of Krefeld.

About noon, while Clermont was deploying his army the Légion Royale and the 4 bns defending Anrath fell back on their camp, after some skirmishes, gave the alarm and joined the French left wing. When Clermont realised that Ferdinand was trying to outflank his left wing, he sent 15 battalions (the brigades of La Marine, Touraine, Brancas and Lochmann) under the command of Saint-Germain against him. He also deployed 30 squadrons to support Saint-Germain. Clermont also recalled the detachment occupying Krefeld. 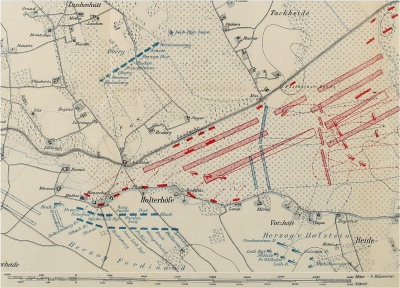 Map of the Battle of Krefeld on June 23 1758 - Detail of the west and centre of the battlefield where the main action occured.

Ferdinand rapidly passed a defile and crossed woods near Anrath with his vanguard. He then deployed them on the plain between Anrath and Willich. Saint-Germain's Corps along with its support of cavalry lined a wood running parallel to the river Niers. According to the Allied plan, Oberg and Spörcken then started their advance towards the French lines. A lively cannonade opened in this part of the battlefield.

At 1:00 p.m., on the Allied right wing, Ferdinand moved his artillery forward, allowing his infantry to form against a wood and Malachowski Hussars to extend on his right towards the village of Willich as if to turn the French left flank. Bock Dragoons were kept behind the right of the infantry. After a lively cannonade, Ferdinand realised that he would have to oust the 15 French battalions from the wood by a direct attack. The Hereditary Prince put himself at the head of the first line (Schulenburg and Schack converged grenadiers battalions, Block, Spörcken, Hardenberg, Wangenheim, Post, Dreves) and entered into the wood.

Clermont, realizing that the decisive action of the battle would take place on his left wing, sent for the reserve (Grenadiers de France, Grenadiers Royaux, Navarre brigade) to march to the support of Saint-Germain's Corps. However, these reserve units were quite distant from the left wing and Clermont's courier lost precious time locating it.

Meanwhile, the French brigades of the second line of the French left wing led by Saint-Germain bore the brunt of the fighting. All on their own, without being reinforced, they fought for almost 3 hours defending the crossing of the ditch and the possession of the hamlets alongside this serious obstacle. Three successive Allied attacks were repulsed. Ferdinand had to commit the second Allied line who penetrated into the wood to force Saint-Germain back. Only 8 Allied sqns remained on the plain as a reserve. The other 16 sqns never managed to enter into the wood, stopped by 2 batteries supported by 30 squadrons.

At about 5:00 p.m., the Hereditary Prince, assisted by Wangenheim and Kielmannsegg, launched his grenadiers in an attack on the two ditches defended by the French in the wood, forcing both of them. The grenadiers were imitated by the other battalions all along the line. Saint-Germain, after sustaining heavy casualties, finally retired from the wood. His retreat was covered by the 48 French squadrons of the left wing who prevented the Allied infantry from advancing into the plain despite the very effective fire of the Allied artillery. However, only three brigades of French cavalry (Carabiniers, Aquitaine and Royal-Roussillon) took an active part in the fighting. It is said that 3 more French cavalry brigades of the left wing refused twice to engage despite explicit orders to do so.

Between 5:00 and 6:00 p.m., 3 dragoon squadrons (1 Hessian and 2 Prussian) under Colonel Bandemer, chef of the Holstein-Gottorp Dragoons, crossed the ditch at an unguarded passage near Engershöfe and advanced into the rear of the French cavalry, causing considerable surprise. Clermont ordered the Carabiniers along with Royal-Roussillon Cavalerie and Aquitaine Cavalerie to charge the Allied troops debouching on the plain. The Hessian dragoons and a Hessian cavalry regiment had first shock with the Carabiniers and Royal-Roussillon Cavalerie and were driven back to the wood with significant loss.

Meanwhile, Major-General von Urff had also passed the defile at the head of his own Leib-Regiment and of the Leib-Dragoner. He countercharged the pursuing Carabiniers, allowing Holstein's remaining squadrons to deploy. After a number of successive furious charges and melees, the French cavalry was completely broken. 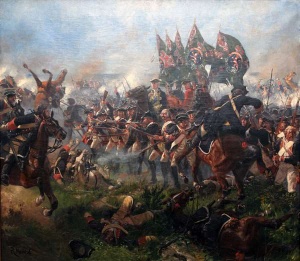 During this cavalry engagement, the Hereditary Prince and Gilsa managed to rally a number of battalions (Hessian Prinz Carl, Hanoverian Post, Dreves and possibly Hardenberg) and then advanced onto the plain. The Comte de Gisors at the head of four squadrons of Carabiniers charged these advancing battalions who let them close in to about 20 paces before firing a devastating volley mowing down in an instant most of the first rank. A single squadron managed to break through but the third rank of infantry coolly made an about turn and knocked it down with its disciplined fire.

Finally, M. de Saint-Pern at the head of the French reserve of grenadiers along with Navarre Infanterie brigade arrived on the scene. The Comte de Lusace wanted to lead these fresh troops into the attack but he rather received orders to cover the retreat of the army. Even considering their late arrival, these 18 battalions if they had been supported by some fresh cavalry could have changed the course of the battle.

Saint-Pern's inexplicable delay before coming to the rescue of Saint-Germain was attributed by certain to treachery within the French high commands.

Clermont retreated to Neuss and then to Worringen.

At 9:00 p.m., the three Allied corps joined each other on the battlefield and spent the night under arms. Meanwhile, the Allied light troops were sent forward to harass the retiring French Army.

During this battle, the French lost some 4,000 men including some of their best cavalry, the Carabiniers alone suffering some 60 officers and 600 men casualties. Among the wounded were the Comte de Gisors (son of maréchal Belleisle), the Chevalier de Muy, Lieutenant-General Comte de Maille, colonel of Condé regiment, the Duc de Montmorency colonel of Touraine Infanterie, the Comte de Lauraguais colonel of the Roussillon regiment, Colonel Lochmann, Lieutenant-Colonel Escher, 4 captains, 17 officers of the same regiment. About 8 French regiments were entirely ruined. The gunners of Prinz Karl Infantry captured a pair of kettle drums while the Leib-Dragoner captured 2 Carabiniers standards, Colonel Stein of the Prinz Wilhelm regiment a third one and the Holstein-Gottorp Dragoons a fourth plus another pair of kettle drums.

Right Wing under Ferdinand of Brunswick