The capture of Fort Carillon (present-day Ticonderoga) was one of the main objectives of the British campaign of 1758 in North America. Accordingly, General Abercromby had assembled a large army of more than 15,000 men at the head of Lake George for the projected expedition against Fort Carillon.

On July 5, Abercromby's troops embarked aboard a fleet of 900 bateaux, 135 whaleboats and a large number of heavy flatboats; and crossed Lake George.

By noon on July 6, the entire British force had disembarked near the narrow channel leading into Lake Champlain. An initial advance towards Fort Carillon was impaired by a French party which ambushed the leading column in the woods. Abercromby had to retire to his landing-place and to rally his troops.

On July 7, Abercromby's army made its way to the vicinity of Carillon.

At daybreak on July 8, the British engineers reconnoitred the entrenchments hastily built by the French the previous day and concluded that they could be stormed. Abercromby then resolved to attack the French entrenchments. 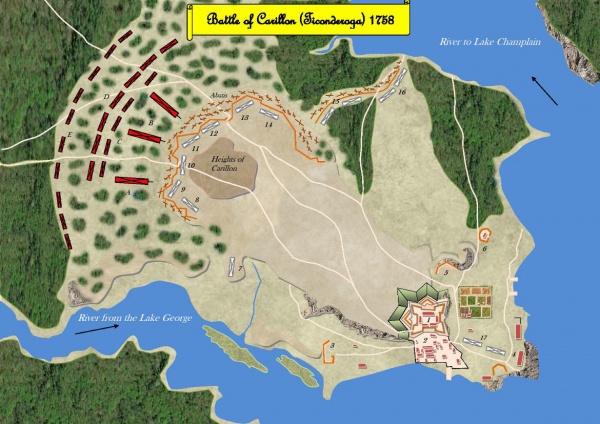 Map of the Battle of Carillon
Courtesy: Dinos Antoniadis
Key to the map:

On July 8 long before daybreak, the French beat the générale and each battalion occupied its assigned position and continued to improve the abatis and batteries while pickets and grenadiers were posted 150 paces in front of the abatis to cover them.

At 5:00 a.m., the Chevalier de Lévis and M. de Sénezergues arrived at Carillon.

Soon after 9:00 a.m., a distant and harmless fire of small-arms began on the slopes of Rattlesnake Hill. It came from a party of Indians who had just arrived with Sir William Johnson, and who, after amusing themselves in this manner for a time, remained for the rest of the day safe spectators of the fight.

Till noon, the French soldiers worked undisturbed. Then, volleys of musketry were heard from the forest in front. It was the British light troops driving in the French pickets and grenadiers. A cannon was fired as a signal to drop tools and form for battle. The French infantry lined the breastwork in a triple row, with the grenadiers and pickets behind them as a reserve, and the III./Berry watching the flanks and rear.

Meanwhile the British army had moved forward in 3 columns from its camp by the saw-mill. First came the rangers, the light infantry, and Bradstreet's armed boatmen, who, emerging into the open space, began a spattering fire.

Across the rough ground, with its maze of fallen trees, the British troops could see the top of the breastwork, but not the men behind it; when, in an instant, all the line was obscured by a gush of smoke, a crash of exploding firearms tore the air, and grapeshot and musket-balls swept the whole space like a tempest. The British had been ordered to carry the works with the bayonet; but their ranks were broken by the obstructions through which they struggled in vain to force their way, and they soon began to fire in turn. The storm raged in full fury for an hour. The assailants pushed close to the breastwork; but there they were stopped by the bristling mass of sharpened branches, which they could not pass under the murderous cross-fires that swept them from front and flank. At length they fell back. Abercromby, who was at the saw-mill, 2 km in the rear, sent order to attack again.

The British then launched a second assault supported by the Provincials, some of them forced their way to the foot of the wooden wall. The French fought bravely. Montcalm, with his coat off, for the day was hot, directed the defence of the centre, and repaired to any part of the line where the danger for the time seemed greatest. Lévis for his part launched several outflanking attacks during the battle.

Between 1:00 and 7:00 p.m., the British army attacked the French entrenchments six successive times.

At about 2:00 p.m., Abercromby tried to turn the French left by sending 20 bateaux, filled with troops, down the outlet of Lake George. They were met by the fire of the 2 companies of volunteers (Duprat and Bernard) stationed to defend the low grounds on that side, and, still advancing, came within range of the cannon of the fort which were manned by a company of 50 Canonniers-Bombardiers de la Marine. The heavy pieces of the south-west bastion sank a barge and, continuing their fire, destroyed another one, finally driving back the rest of the flotilla.

A curious incident happened during one of these attacks. De Bassignac, a captain in the battalion of Royal Roussillon, tied his red handkerchief to the end of a musket and waved it over the breastwork in defiance. The British mistook it for a request for negotiation, and came forward with all possible speed, holding their muskets crossed over their heads in both hands, and crying “Quarter”. The French made the same mistake; and thinking that their enemies were giving themselves up as prisoners, ceased firing, and mounted on the top of the breastwork to receive them. Captain Pouchot, astonished, as he says, to see them perched there, looked out to learn the cause, and saw that the enemy meant anything but surrender. Whereupon he shouted with all his might: "Tirez! Tirez! Ne voyez-vous pas que ces gens-là vont vous enlever?" (Fire! Fire! Don't you see that these peoples will take the place). The soldiers, still standing on the breastwork, instantly gave the British a volley, which killed some of them, and sent back the rest discomfited.

In one of the last assaults a soldier of the Rhode Island regiment, William Smith, managed to get through all obstructions and ensconce himself close under the breastwork, where in the confusion he remained for a time unnoticed, improving his advantages meanwhile by shooting several Frenchmen. Being at length observed, a soldier fired vertically down upon him and wounded him severely, but not enough to prevent his springing up, striking at one of his enemies over the top of the wall, and braining him with his hatchet. A British officer who saw the feat, and was struck by the reckless daring of the man, ordered two regulars to bring him off; which, covered by a brisk fire of musketry, they succeeded in doing.

Throughout the battle, the fire of the French line was so lively that the British columns were unable to reach the entrenchments, only isolated platoons managed to get within 20 paces from them before being dispersed by the French fire.

Some Canadian militia (273 men) and Troupes de la Marine (80 men) arrived during the battle and immediately joined the fight.

Toward 5:00 p.m., two British columns joined in a most determined assault on the extreme right of the French, defended by the battalions of Guyenne and Béarn. The danger for a time was imminent. Montcalm hastened to the spot with the reserves. The assailants hewed their way to the foot of the breastwork; and though again and again repulsed, they again and again renewed the attack. The 42nd Highlanders fought with stubborn and unconquerable fury. Their ardor was such that it was difficult to bring them off. Their major, Campbell of Inverawe received a mortal shot, and his clansmen bore him from the field. Furthermore, 25 of their officers were killed or wounded, and half the men fell under the deadly fire that poured from the loopholes. Captain John Campbell and a few followers tore their way through the abatis, climbed the breastwork, leaped down among the French, and were bayoneted there.

As the colony troops and Canadians on the low ground had been left undisturbed, Lévis sent them an order to make a sortie and attack the left flank of the charging columns. They accordingly posted themselves among the trees along the declivity, and fired upwards at the enemy, who presently shifted their position to the right, out of the line of shot. The assault still continued, but in vain.

At 6:00 p.m., there was another equally fruitless effort against the French centre and left. From this time till 7:30 p.m. a lingering fight was kept up by the rangers and other provincials, firing from the edge of the woods and from behind the stumps, bushes, and fallen trees in front of the lines. Its only objects were to cover their comrades, who were collecting and bringing off the wounded, and to protect the retreat of the regulars, who fell back in disorder to the Falls.

Montcalm passed along the French lines and gave the tired soldiers the thanks they nobly deserved. Beer, wine, and food were served out to them, and they bivouacked for the night on the level ground between the breastwork and the fort.

As twilight came on, the last combatants withdrew, and none were left but the dead.

Abercromby had lost in killed, wounded, and missing, 1,944 officers and men. He had managed to retreat his siege train without the loss of significant amounts of ordnance or gunpowder stores.

The loss of the French, not counting that of Langis' detachment, was 372 (9 captains, 5 lieutenants and 92 troopers killed; 10 captains, 6 lieutenants, 2 Marine troopers and 248 troopers wounded). Bourlamaque was dangerously wounded; Bougainville slightly; and the hat of Lévis was twice shot through.

N.B.: Lévis’s detachment of 400 men was composed of the light company of each of the regular battalions present, with the exception of Berry Infanterie which supplied a single light company