In June 1758, Ferdinand of Brunswick had crossed the Rhine and undertaken a campaign on the western (left) bank with the Allied army and defeated Clermont in the Battle of Krefeld on June 23. He spent the month of July campaigning on this side of the Rhine. However, his long supply line across the Rhine with Hanover was very vulnerable. Indeed, it depended entirely on a single bridge at Rees guarded by a small detachment under Imhoff. 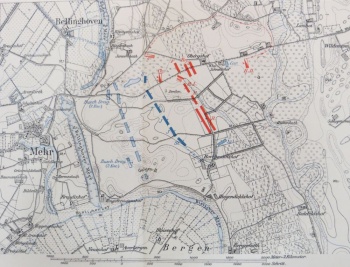