The campaign took place in April 1758

The struggle for colonial supremacy between France and Great Britain was not confined to India and North America. It also encompassed commercial conflicts in Africa and elsewhere.

In 1753, French were building forts on the Gambia. According to the British merchants of Africa, they were also stirring up the natives against them. The Royal African Company, a British company who held the monopoly of the slave trade, had a line of fortified depots on the West Coast. It begged the British government to eliminate the potential threat from the neighbouring French settlements in Sénégal and in the island of Gorée.

Indeed the expedition against the French settlements of Sénégal had been suggested by Mr. Thomas Gumming, who knew some of the native princes. One of these had promised his cooperation against Gorée and Sénégal, and had undertaken, in case of the success of the adventure, to grant exclusive slave trading privileges to British subjects. Gumming represented that a force of a certain strength would be required for the service. The British administration unwisely cut down his estimates and repeatedly deferred action until Mr. Samuel Touchet, an influential London merchant, warmly seconded the project.

On March 9, 1758, a small British squadron under Captain Henry Marsh sailed from Plymouth. It was despatched against the French settlements in West Africa and consisted of:

The troops included 200 Marines under Major Mason and a detachment of 25 artillerymen with 10 guns and 8 mortars under Captain Walker. Mr. Gumming accompanied the expedition.

Marsch's squadron called for wine and water at Tenerife in the Canary islands. Meanwhile, Mr. Gumming, in the Swan, went on in advance to arrange for assistance from the natives. 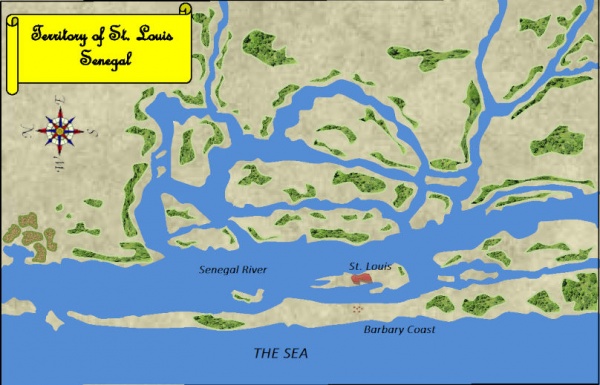 On April 23, Marsh reached the mouth of the Sénégal River and sighted the French flag flying on Fort Louis in midstream, 20 km above the bar. The French had armed a brig and 6 sloops and had placed them above the bar to defend the channel through it. These much annoyed the British boats which went in to sound. In the meantime troops were put into the small craft. Gumming could not conclude matters with the natives and Marsh decided not to wait for negotiations, but at once to proceed.

On April 29, the Swan with the busses and armed vessels weighed and made up the river with a fair wind. The London and some of the small craft were wrecked on the bar but no lives were lost. Most of the rest of the vessels got in safely and made for the French ships which promptly retired under the guns of the fort.

Map of Fort Louis in Senegal in 1758 - Copyright Dinos Antoniadis

On May 1, a French deputation soon surrendered the fort which was garrisoned by 232 French officers and soldiers. However, the actual handing over of the place was delayed, owing to the action of the natives, who, not thinking that their interests had been sufficiently secured, blockaded the French.

The difficulty being got over, the fort was occupied by a detachment of 200 men of the 74th Regiment of Foot (Talbot's). In it, 92 guns were found and, with it, 16 craft of various sizes were given up. The entire estimated value of the capture was about £200,000. Podor, and other stations further up the river, were included in the capitulation. For his services Mr. Gumming was granted a pension during his lifetime. These possessions had long supplied black slaves to the French settlements in the West Indies and for that reason their loss was soon severely felt.

Commodore Marsh, leaving a few small vessels on the spot, sailed next to attack Gorée, about 140 km to the southward.

On May 24, Marsh arrived off the island of Gorée and at once began a hot cannonade, having anchored his ships with springs on their cables. But he had miscalculated the strength of the defence and in about two hours and a half he had to signal his little squadron to cut, as the rigging and spars, as well as the hulls, were badly mauled, and about twenty men were killed, and forty wounded.

The Nassau, Swan and Portsmouth then returned to Great Britain with such trade as was bound thither.

Later, the Rye sailed with a convoy for the Leeward Islands. Marsh himself with the Harwich escorted the trade which was bound for Jamaica.