The campaign lasted from July to December 1758

French retreat behind the Rhine

During the first months of 1758, the Duc de Broglie took over command of the French troops in Lower Hesse, as the Prince de Soubise, governor of Kassel until then, preferred to spend winter in Paris.

In February, when Ferdinand of Brunswick launched his winter offensive in Hanover against the Maréchal Duc de Richelieu, Broglie too had to retreat. On March 21, he evacuated Lower Hesse. The bulk of his army marched to Düsseldorf and Deutz (Cologne).

The Landgraviate of Hesse-Kassel was now free from French troops. Landgrave Wilhelm VIII was thus able to return in his estates.

On April 3 and 4, most of Broglie's Army crossed the Rhine. This army was initially supposed to represent the French contingent put at the disposal of Austria for the campaign of 1758. However, with the consent of the court at Vienna, this French army was redirected to operate in Hesse. After the withdrawal behind the Rhine, Versailles gave orders to Soubise to return to Hesse which was completely devoid of enemy troops within 65 km.

Accordingly, by May, a force of 9 bns and 18 sqns under the command of the Comte de Lorges had assembled in the Hesse-Hanau area.

On May 6, Landgrave Wilhelm VIII arrived at Kassel.

On May 9, Ferdinand detached the Lieutenant-General Prince von Ysenburg to Marburg, to organize, at the request of the landgrave, the defence of Hesse-Kassel against Soubise's Army. Ysenburg left Westphalia with a force of 2 bns, 2 sqns, 2 light troops coys and a few artillery pieces:

With his small army, Ysenburg could not consider an offensive against his opponent, but he had to dispute any advance of the French into Hesse-Kassel and retreat to Hameln only in the last extremity.

Ferdinand estimated Soubise’s force at 16,000 men and believed that it would move downstream along the Rhine instead of entering into Hesse-Kassel.

On May 31, Ferdinand of Brunswick crossed the Rhine at the head of the Allied main army to operate on the west bank of the Rhine against Clermont's Army.

In the first days of June, Soubise's Army left its cantonments and concentrated at Hanau and Höchst. Meanwhile Ysenburg, who was posted at Marburg, progressively retired to Kassel. Broglie followed Ysenburg during his retreat with a corps consisting of:

On June 23, Ferdinand defeated Clermont's Army in the Battle of Krefeld. This defeat delayed the concentration of Soubise's Army in Hesse. However, Soubise received instructions to invade Hesse with his 24,000 men. The French hoped that this offensive would induce Ferdinand to recross the Rhine.

By July, Soubise's Army amounted to some 30,000 men in 39 bns and 32 sqns assembled near Hanau. This army was formed of the bulk of the German and Swiss regiments in French service. Furthermore, Soubise expected to be soon reinforced by a Württemberger Contingent of some 6,000 men.

The various contingents under French pay (Palatinate, Württemberg and Saxony) were instructed to make their junction with Soubise as soon as possible.

Soubise received instructions from Paris to advance into the Landgraviate of Hesse-Kassel and to occupy the principality before marching into the Electorate of Hanover and the Duchy of Brunswick; thus forcing Ferdinand to abandon his campaign on the left bank of the Rhine and allowing Contades to cross to the right bank of the Rhine with the main French army and then effect a junction with Soubise’s Army.

On July 11, Soubise’s Army, which had advanced northwards from Hanau, reached Friedberg. Broglie led the vanguard. He planned a slow and hesitant advance to give Ysenburg a sentiment of security and then to attack him by surprise. 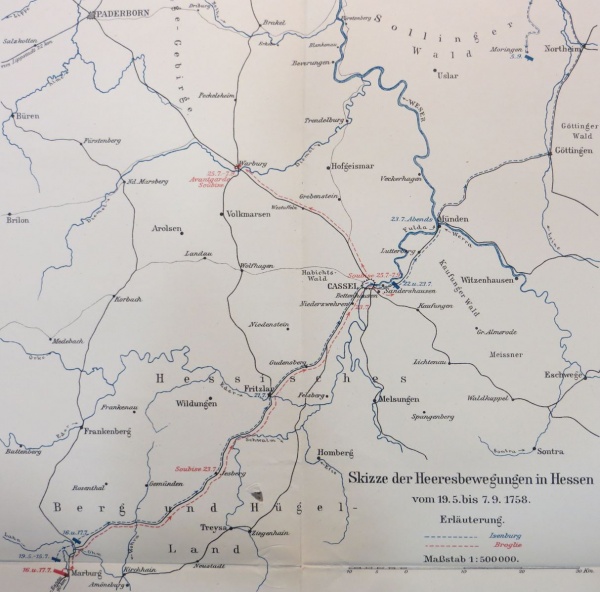 Allied and French manoeuvres in Hesse from mid-May to September 1758.

On July 17, the Allied garrison retired from Marburg just before the arrival of the troops sent ahead by Broglie.

On July 19, Soubise's Army marched from Marburg towards Kassel.

On August 3, a British contingent of 12,000 men, under the command of the Duke of Marlborough, disembarked at Emden on the coast of East Frisia. Indeed, the successes of Frederick II at Rossbach during the previous year and those of Ferdinand in Hanover since January had enticed the British Government to send reinforcements.

On August 8, the Württemberger Contingent (13 bns for a total of approx. 6,000 men) effected a junction with Soubise’s Army near Kassel.

On August 9 and 10, fearing an attack by Soubise on the 12,000 British troops recently landed and anxious about his bridge on the Rhine, Ferdinand recrossed to the right bank of the Rhine with his army and then burnt his bridges. Meanwhile, General Hardenberg evacuated Düsseldorf and retired to Lippstadt.

On August 18 (???), Soubise detached a large body to Warburg and another to Geismar. At the same time, Fischer quit Göttingen.

On August 19, the Marquis Contades, following up Ferdinand, finally completed the crossing of the Rhine. With Contades’ Army now on the right bank of the Rhine, even though nothing prevented him from advancing in Hanover, Soubise rather contemplated to push troops forward on Paderborn and to capture Lippstadt as Belle-Isle so urgently requested. Meanwhile he raised more than 6½ millions Gulden in contribution in Hesse-Kassel.

On August 30, Oberg’s cavalry left its camp on the Lippe south of Dülmen and marched eastwards in the direction of Beckum.

On September 2, Oberg followed with his 7 bns.

On September 4, Oberg reached Lippstadt with his entire corps. He would remain there until September 13.

On September 5, Ysenburg’s Corps marched from Einbeck to Moringen where it encamped.

By the end of the summer, Contades was elaborately manoeuvering to capture Lippstadt or some fortress in the Rhine-Weser countries. However, as long as he could not cross the Lippe, it was impossible to Soubise's Army to advance in Hanover beyond the Werra River. Therefore, Soubise waited at Kassel for almost a month for Contades to advance close enough to allow for mutual support.

By September 8, Soubise had assembled 28 bns and 20 sqns near Münden, leaving only a detachment (9 bns and 12 sqns) near Warburg, and 6 bns in Kassel. He had decided to advance into Hanover.

The Prince von Ysenburg, now reinforced with a few Hanoverian jägers had some 7,500 men. He reoccupied Göttingen. 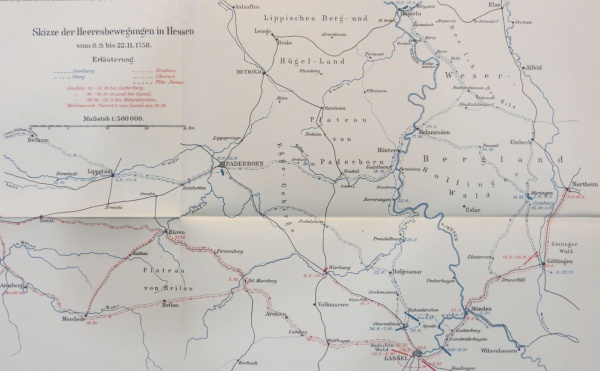 Allied and French manoeuvres in Hesse from September to November 1758.

When Ferdinand was informed of the advance of Soubise in Hanover, he gave orders to Oberg to march to Paderborn to threaten Kassel. He also sent Oberg a reinforcement of 3 bns and 2 sqns.

On September 13, Oberg and Ysenburg asked for Ferdinand’s authorization to effect a junction and then advance against Soubise.

On September 14, Soubise marched to Einbeck. The Chasseurs de Fischer made incursion in the Electorate of Hanover, pushing forward up to the gates of the city of Hanover, plundering the silver mines of the Harz on their way.

On September 15, after having made several demonstration, as if he intended to cross the Weser, Oberg suddenly moved to Paderborn with 14,000 men. Oberg would remain at Paderborn until September 22.

On September 17, Zastrow's Corps made a junction with Ysenburg at Coppenbrügge. Ysenburg then threw a bridge on the Weser at Holzminden to simulate a crossing.

Ysenburg had exchanged his militia bns for 2 regular bns which previously garrisoned Lippstadt. Furthermore, the recently raised Hanoverian Marsschalck Infantry joined his corps. With these new units, Ysenburg was now at the head of 7 bns and 10 sqns. Together, Ysenburg and Oberg could field 18 bns and 20 sqns. The moment seemed to be well chosen to drive Soubise out of Hanover and Hesse.

On September 22, Ysenburg’s Corps set off from Hameln.

On September 23, Oberg’s Corps set off from Paderborn without waiting for the arrival of an additional Hanoverian bn (Wrede Infantry).

On the night of September 26 to 27, the advanced elements of Soubise’s Army arrived at Kassel.

During all these manoeuvres, Contades had remained idle in his camp at Recklinghausen where he was since August 19.

Oberg’s and Soubise’s armies encamped face to face until early October. Initially, Oberg had considered to turn the French left wing but he soon abandoned his plan when reconnaissances revealed the difficulty of the planned attack. Meanwhile, Allied hussars often skirmished against Fischer's light troops.

On September 29, Contades detached General Chevert from the French main army at Unna with 22 bns (including the Saxon Contingent) and 24 sqns to reinforce Soubise near Kassel. Chevert should march by way of Soest and Büren.

On September 30, the Duc de Fitzjames set off from Werl with another 10 bns and 12 sqns destined to Soubise’s Army. Fitzjames should follow Chevert’s Corps in its march.

On October 2, Oberg was informed that new reinforcements had been sent to Soubise from the French main army. These reinforcements threatened the rear of his positions.

During the night of October 3 to 4, the Allies retired along the Fulda River through a reputedly impassable dale.

On October 12, the corps of Chevert and Fitzjames quitted Soubise’s Army to rejoin Contades’ main army in Westphalia.

On October 16, Soubise returned to Kassel with his army after having remained almost idle at Lutterberg for several days.

Contades now thought that he had his chance against Ferdinand. But when the latter heard of Oberg's defeat at Lutterberg, he decided to manoeuvre to prevent the junction of Contades and Soubise and to stop Soubise from advancing into the Electorate of Hanover. Ferdinand's endeavour was successful and the two French army were unable to form a junction.

On October 28, Soubise moved his army to Hohenkirchen, 10 km north of Kassel, and cantoned his troops, leaving a garrison in Münden.

General Ysenburg put some troops in Göttingen and cantoned his corps in the neighbourhood.

On November 22, Soubise evacuated Münden and began to retire behind the Lahn.

On November 23, Soubise, considering that it was impossible to maintain his army at Kassel during winter, evacuated the town. He seized Giessen, throwing a garrison of 3,000 picked troops in this town. He also took possession of Friedberg in der Wetterau. Finally, he took his winter-quarters which extended from the mouth of the Lahn, along this river and the Main. Soubise established his headquarters at Hanau and his hospital at Marburg. At Giessen as well as in Friedberg, 400 peasant were requisitioned to repair the fortifications.

The Saxons took their winter-quarters in the area Katzenelnbogen, Limburg, Wetzlar and Marburg. Prince Xaver then went to Paris where he obtained the renewal of subsidies for another year.

On November 24, Prince Ysenburg took up cantonments near Münden.

By November 30, Prince Ysenburg had established his winter-quarters from Kassel to Fritzlar.

This article is essentially a compilation of texts from the following books who are now in the public domain: