By mid July 1758, general Fermor had started the invasion of Brandenburg with a large Russian army. He slowly advanced towards the Prussian fortress of Cüstrin.

On August 14, Dohna who commanded the Prussian army defending Brandenburg, was informed that advanced parties of the Russian army had been seen in front of Cüstrin, he detached lieutenant-general Ludwig von Schorlemmer with 4 grenadier bns, 5 hussar sqns and 10 dragoon sqns to observe them. Schorlemmer arrived at Cüstrin in the evening and took position in the northern suburb. 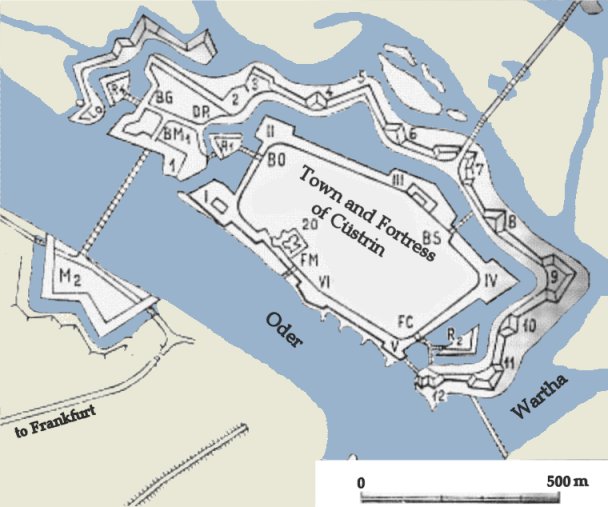 Map of the siege of Cüstrin .

N.B.: some of these fortification works have been built after the siege

The fortress of Cüstrin counted 75 fortress guns, 36 of them being located in the 4 bastions named : Prince, Princess, Queen and Gorzyn on north. The place was initially under the command of colonel von Seiger who was replace by colonel von Wuthenow (???). The garrison counted 8 companies of invalid and sick.

On August 15 at 2:00 AM, quartermaster general Stoffeln, according to Fermor's orders, marched against Cüstrin with:

Upon arriving at Cüstrin, a trumpeter was sent forward with a summon from Fermor but he was fired upon. Fermor soon followed with the main Russian army which now counted 40 bns, 25 heavy cavalry sqns, several hussar regiments and a great number of cossacks. He sent some light troops against the Prussian hussars deployed on the left of the suburb while the rest of them joined Stoffeln's grenadiers in the woods. The Russian light troops advancing against the suburb were driven back by the Prussian cavalry. Some 5,000 Prussian troops then advanced and occupied the flèches which had been thrown up in the plain. The Russian hussars and cossacks rallied while the Russian grenadiers came of of the wood and the artillery unlimbered its pieces. A bloody engagement took place on the Winna Góra (Win Hill) and in the cement factory. The Prussian troops then hastily retired in Cüstrin and the Russian light troops occupied the northern suburb. The Russians immediately erected redoubts and opened the parallel. The Russian artillery opened against Cüstrin at 9:00 AM. The town soon took fire and by 5:00 PM, it was a mere ruin. However, the garrison stood unharmed and the church, schoolhouse and the main guard-house were still standing albeit in a charred skeleton condition. During this first confrontation, the Russians lost 8 killed and 36 wounded. Meanwhile, Dohna marched from Frankfurt towards Cüstrin while Manteuffel was retiring upon Frankfurt according to the orders that he had previously received. The Prussian artillery at Cüstrin ceased to fire in the evening and the Russian artillery, realizing that despite the fire no damage had been done to the work, soon did the same. The same day, Frederick's corps, which was marching from Silesia to reinforce Dohna and check the Russian advance, arrived at Dalke (unidentified location).

On August 16 in the morning, Dohna encamped at Reitwein where he was joined by Manteuffel's detachment. Meanwhile, colonel Schack commander at Cüstrin bravely defended the town, opening fire from the bastions with mortars and guns. Meanwhile, the Russians resumed the construction of siege works. A first battery of 8 guns and one unicorn was planted on Wilczy Zakątek (Wolf Nook) and a second of 8 guns and 2 unicorns in the northern part of the cement factory. Finally, a third battery of 2 2 guns, unicorns and secret Shuvalov howitzer was planted on Win Hill. The Russian artillery was under the command of general Holmer. During this time, Fermor was preparing to cross the Oder at Schaumburg (unidentified location) but Dohna sent Manteuffel with 4 bns and a heavy battery to take position behind the dyke of Oderdamm and to prevent the crossing of the river. During the night, the Russians opened the trenches in front of Cüstrin, they now had five batteries planted in front of the fortress. By the end of the day, the Russian artillery had fired 517 shots on Cüstrin while the Prussian artillery retaliated with 85 shots. The same day, Frederick's corps marched from Dalke to Wartenberg (unidentified location).

On August 17, Dohna took position between Manschnow and Gorgast. A bridge was thrown on the river to establish communication with Cüstrin and its garrison was reinforced with 3 bns. The same day, a Russian trumpeter was sent to summon the town but Schack answered that he would defend the place to the last man. The same day, Frederick's corps marched from Wartenberg to Plothe (unidentified location).

On August 18, artillery on both sides was almost silent. For the two last days, the Russian artillery had fired some 139 shots while the Prussian artillery responded with 268 shots. One double unicorn (96-pdrs) and 4 single unicorns (48-pdrs) arrived from Landsberg to reinforce the Russian artillery. A sixth redoubts was completed and work began on a bridge but this was soon interrupted. The same day, Frederick's corps marched from Plothe to Crossen (actual Krosno Odrzańskie).

In the evening of August 19, Cüstrin artillery kept up a very heavy fire (600 shots during the entire day) and unsuccessfully tried to burn the suburb, hoping to interrupt the construction of siege works. The same day, Frederick's corps marched from Crossen to Ziebingen (actual Cybinka) where the whole corps encamped except Asseburg Infantry which remained in the village to protect the headquarters.

On Sunday August 20, colonel Schack, after a renewed attempt, burnt the small suburb of Cüstrin (his artillery fired 753 shots that day) because it protected the siege works of the Russians. A Russian detachment under brigadier Muraviev tried to cross the Oder near Cüstrin but was stopped by Manteuffel with his 4 grenadiers battalions and by the artillery of the fortress. The same day, Frederick’s army 15,000 strong reached the city of Frankfurt on the Oder and the king took lodgings in the house of a clergyman widow. His infantry cantoned in the town while the cavalry encamped in front of the Lebus Gate. At Frankfurt, Frederick was observed to go often out of doors to listen to the noise of the Russian guns firing upon some 32 km away.

Early in the morning of August 21, leaving his corps behind at Frankfurt, Frederick visited general Dohna at his camp at Gorgast, just outside Cüstrin. Dohna had been keeping a watch on the Russians, although unable to interfere with their proceedings.

Tuesday, August 22 at 5:00 AM, Frederick's own army joined forces with Dohna's at Manschnow. The same day, prince Moritz arrived with his corps which had left Landeshut (actual Kamienna Góra) in Silesia on August 11 and marched by Liegnitz, Crossen and Ziebingen. The Prussian army at the camp of Gorgast now counted 37,000 men. Frederick then organised the crossing of the Oder.

On August 23, Frederick's army crossed the Oder near Güstebiese. When Fermor learned that Frederick had crossed the Oder and cut his line of communication with Rumyantsev's cavalry corps (12,000 men) camped downstream at Schwedt, he lifted the siege of Cüstrin and detached his baggage and artillery train to Kleinkammin (probably Kamien Maly) escorted by 4,000 grenadiers and 4 guns who formed a wagenburg to protect the baggage.

On August 25, the Prussian and Russian engaged in a bloddy and indecisive battle at Zorndorf.

During this brief siege, 191 houses were destroyed in the town and 127 others in the suburbs. The Russian losses amounted to 11 killed and 36 wounded.

The timely arrival of Frederick and prince Moritz and the indecisive battle of Zorndorf put an end to the Russian enterprise against the fortress of Cüstrin.

Tomasz Karpiński (student at the Institute of History, University of Adam Mickiewicz in Poznań, Poland) for the additional information from the books of Piatkowski, Maslovskij and Gierhats.