The siege took place in April 1758

On March 15, 1758, Frederick II moved out of Breslau (present-day Wrocław) in Silesia and established his headquarters at Kloster-Grüssau (present-day Krzeszów) near Landeshut (present-day Kamienna Góra). Before initiating the new campaign, he had to eliminate the thorn in his side represented by Schweidnitz (present-day Swidnica), isolated but in the hands of the Austrians. Frederick then immediately gave the order to start the siege of Schweidnitz which he entrusted to Lieutenant-General von Tresckow.

On March 16, Frederick left Kloster-Grüssau. The corps left under the command of Tresckow for the siege of Schweidnitz consisted of 18 weak bns and 35 sqns, a force of approx. 6,000 foot and 4,000 horse, for a total of 10,000 men. They were supported by a train of siege artillery of 102 pieces (see the section “Order of battle” for details).

On March 22, Tresckow arrived at his headquarters at Würben (present-day Wierzbna) to supervise the siege of Schweidnitz.

Tresckow’s artillery park was established at Säbischdorf (present-day Zawiszów); the depot of his pioneers, at Zülzendorf (present-day Sulislavice). Tresckow was constantly ill during the siege but he nevertheless continued to assume command, well seconded by Colonel-Ingenieur von Balbi.

The Austrian garrison counted some 8,000 men under the command of Count Thürheim. The Austrians were already greatly tried by the blockade of Schweidnitz during the last three months of the winter.

On April 1 at 8:00 p.m., under a torrential rain, 1,600 Prussian foot, 150 miners and 400 peasants advanced from Säbischdorf to work at the 1,000 paces long first parallel within 500 paces in front of the glacis of the Galgen Fort. The left wing was anchored on the Weistritz and strengthened with a redoubt; the right wing formed en potence. Work was completed by sunrise without any intervention of the besieged garrison which did not notice the work until it was finished.

In the night of April 2 to 3, the Prussians started to work on ten batteries. The Austrians opened a lively fire, destroyed part of the work done on these batteries and caused great damages to 4 guns planted north of the Jauernicker Flèche.

On April 8, Frederick finally decided to open against the Galgen Fort, the Kirchen Redoubt and the Jauernicker Fort with his batteries even if some of them were not yet completed. Bombardment was not very intense because all ammunition and troops had to come from Säbischdorf. Nevertheless, the Austrians directed their artillery fire against the operational batteries, allowing the Prussians to work on the incomplete ones.

In the evening of April 10, the Austrians evacuated the Galgen Flèche which the Prussians immediately occupied, rapidly bringing 2 field pieces into it.

In the night of April 10 to 11, the Prussian started sapping from the Galgen Flèche towards the Galgen Fort.

On April 11, Wobersnow reported to Frederick that the siege of Schweidnitz was progressing well: the Galgen Fort had suffered heavily and could reply to the Prussian bombardment with only 2 field pieces while the Kirchen Redoubt and the Jauernicker Fort could only reply with weak fire. However, the Austrian pieces located on the main wall between the Striegau Gate and the Köppen Gate were still maintaining a lively fire.

On April 12, the Austrian brought additional guns in the Jauernicker Fort and in the adjacent defensive works. Furthermore, their guns in the Wasser Fort started to take part in the artillery duel. To counter the artillery of the Wasser Fort, the Prussians started to work at a mortar battery established on the north shore of the pond near the valley of the Weistritz. The Prussian sap was now withing 150 paces from the palisade of the covert way of the Galgen Fort.

On April 14, the Prussians established four 12-pdrs in the Galgen Flèche. Furthermore, their new mortar battery near the Weistritz pond opened on the Wasser Fort. The fire of Austrian artillery posted in the defensive works gradually decreased. Only the artillery posted on the main walls kept up a lively fire.

While the weather conditions deteriorated, Balbi, the chief engineer, advised Frederick to attempt an assault.

Storming of the Galgen Fort

On April 16 at 2:00 a.m., the Prussians launched an assault on the Galgen Fort. It was conducted by 3 grenadier battalions (Dieringshofen, Benckendorff and Grenadier Battalion Arnim). The first attack against the crémaillère was made by 240 men of the Grenadier Battalion Dieringshofen. They were followed by the miners, carpenters and men carrying ladders. They advanced out of the left end of the parallel along the Weistritz valley and easily moved through the abatis. They penetrated into the entrenchment, surprised the defenders and, after a short fight, took them prisoners.

Ingenieur-Major Embers followed this column with 150 grenadiers of the same battalion to storm the Galgen Fort, accompanied by the necessary workers. They inclined to the right and broke through the palisade of the Galgen Fort.

Immediately, 100 grenadiers of the Grenadier Battalion Arnim, who formed the storming party of this column along with carpenters and men carrying ladders, ascended the defensive works of the fort along with the Dieringshofen’s column. The 3 officers and 150 men defending the fort were taken by surprise and did not oppose much resistance, surrendering as prisoners of war.

During the attack on the Galgen Fort, 300 men of Garrison Regiment II. Sydow had taken position behind a hillock in front of the Jauernicker Fort to attract the attention of the defenders. This diversion succeeded and the Austrians kept their main reserve near the Evangelic Church, hesitating to commit it at the Galgen Fort or at the Jauernicker Fort. Finally, the defenders of the Kirchen Redoubt exploded a mine without achieving any significant result. The attack had lasted 30 minutes and the Prussians had lost 23 men killed and 63 wounded:

The Surrender of Schweidnitz

On April 16, about an hour after the capture of the Galgen Fort by the Prussians, Thürheim, the Austrian commander ordered to beat the chamade.

On April 16 at 5:00 a.m., Thürheim sent Major Count Wallis to negotiate capitulation with Tresckow, asking for free withdrawal. Treskow replied that he would only accept the conditions that Nádasdy had granted to the Prussian garrison the previous year. Thürheim finally accepted these conditions. In the afternoon, Prussian grenadiers occupied two gates of the Fortress of Schweidnitz.

Overall, during the entire siege of Schweidnitz, the Prussians had lost 15 officers and 338 men. For their part, the Austrians had lost a third of the garrison (mostly from illness, with only 50 men killed or wounded in combat).

In the morning of April 18, the Austrian garrison of Schweidnitz (4,912 men, including sick) marched out of the fortress and deposited arms. The Prussians captured 51 Austrian pieces in the fortress and recuperated a large number of Prussian pieces seized by the Austrians when they took the fortress the previous year. Garrison Regiment II Sydow escorted the prisoners to Breslau while Garrison Regiment XI Manteuffel, under the command of Colonel von Zastrow, occupied the Fortress of Schweidnitz. Frederick ordered to repair the defensive works.

The fortress of Schweidnitz (actual Swidnica) is located in Silesia, at an important crossroad linking Breslau, Glatz, Landeshut and the axis Bunzelwitz-Striegau-Liegnitz. In the vicinities of the city, to the east of it, ran the Weistritz river with sandy banks and marshes all along its course. The Weistritz river separates Schweidnitz from its suburb of Kletachkau. To the south of the fortifications of the city lays the suburb of Schreibendt and the mill known as the Neue Mühle, on the banks of a tributary of the Weistritz: the Bögen Wasser.

The city of Schweidnitz was a fortified place which Frederick II improved from 1747 to 1756 through continuous series of works. The works were finished just for the outbreak of the Seven Years' War. Outer works were added to the walls dating from previous periods. Some of these outer works were as far as 500 m. from the city walls. The concept was new and revolutionary. It relied on defensive zones taking advantage of the lay of the land in front of the works and creating areas of cross fire. This approach was an innovation compared to Vauban's theory basing the defence on a continuous rampart completely conditioning the dispositions of the outworks. Developed by the same Frederick, this brilliant innovation, often copied in the military architecture of the XVIIIth century, allowed for a more economic use of fortifications without the huge dispersion of manpower and artillery necessary to defend the extensive perimeter of a city, and the vast construction and maintenance expenses.

The Austrians, who eventually became masters of the fortress, did not really grasp the modernity of its structures and linked the outworks with fieldworks to constitute continuous fortifications. 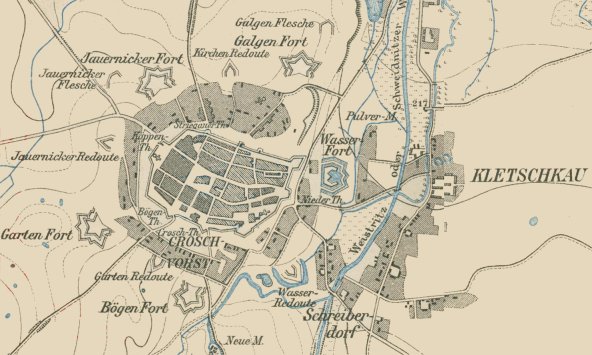 Map of the fortress of Schweidnitz in 1757.
Source: Kriege Friedrichs des Grossen, volume III by the German Grosser Generalstab

The role of stronghold was assumed by a kind of star or zigzag shaped fortification known as a sternschanze, consisting of a small central irregularly shaped pentagon with a three-pointed base facing the town. A small place of arms occupied the inside of this sternschanze with ramps leading to the platform protected by a parapet; a ditch separated the central redoubt from the external star-shaped curtain wall. The base of the curtain wall ran parallel to the walls of the five-pointed central redoubt whose three longer walls were parallel to those of the curtain wall and its two smaller ones ran opposite to its base. The height of the outer curtain wall allowed to fire from the central redoubt. The zigzagged outer curtain wall was fitted with a ditch and a counterscarp, a covert way and a glacis. In the inner angle between two bastions, covered caponnieres with loopholes for enfilade fire crossed the ditch to link the curtain wall to the redoubt. The central redoubt was armed with 15 heavy guns deployed evenly in three batteries placed at the extremity of each point.

Each sternschanze had its own powder magazine, barracks for its garrison and magazines providing for a certain autonomy for these isolated forts. The entrance was located at the base and accessed through a covert way. The parapet of this covert way, the caponnieres and the base of the curtain wall in the ditch were reinforced by palisades and breastworks of fallen trees. A vast network of countermine galleries existed and was later improved by the Austrians after the capture of the fortress.

The Wasser Redoubt and the Wasser Fort overlooked the Weistritz river flowing to the southeast of Schweidnitz. 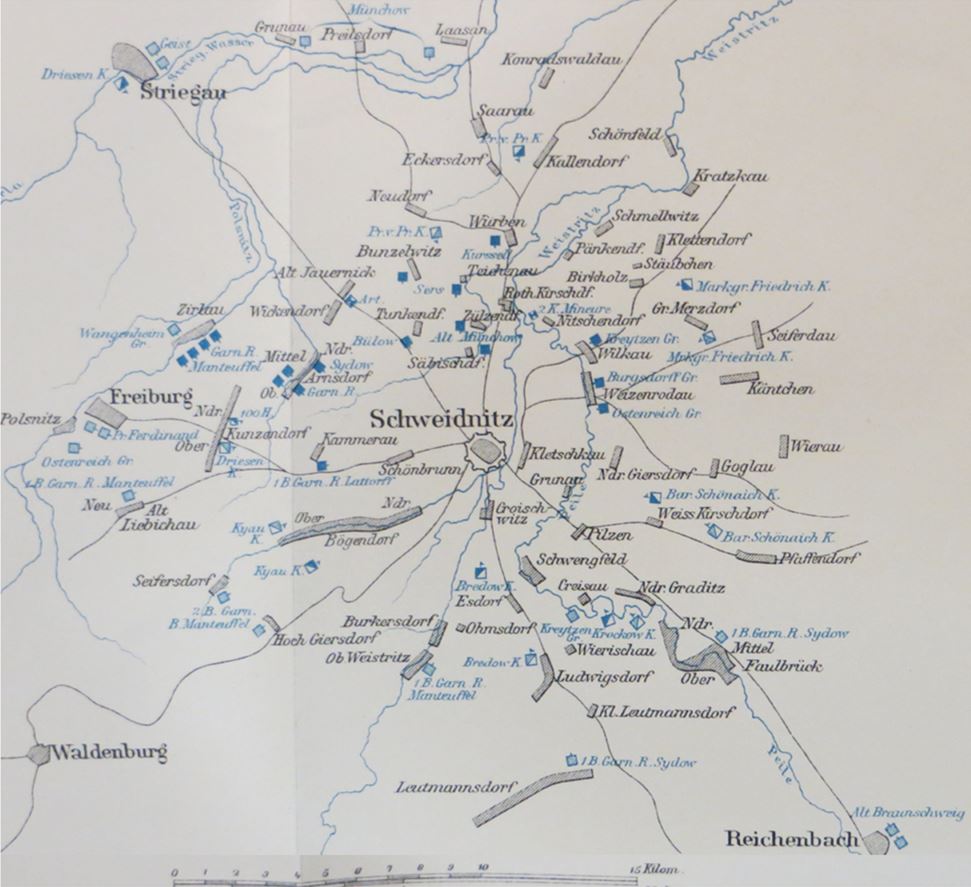 The Austrian garrison counted some 8,000 men but for now we do not have information about the detailed order of battle of this force.

Artillery (480 men) with a siege artillery consisting of:

The present article contains translated excerpts from the following book which is in the public domain:

Carlo Bessolo for the initial version of this article, Richard Couture for the version incorporating text from the work of the German Grosser Generalstab.