Early in July 1759, during their offensive in West Germany, the French captured Minden. The French had now secured a bridge over the Weser and had free access into Hanover. This forced Ferdinand of Brunswick to react quickly to this threat. On July 17, hoping to lure the French into a battle, he deployed his army in the plain of Minden but this plan did not succeed. Ferdinand then methodically advanced his positions towards Minden while giving the impression that his various corps were isolated.

On July 27, the Hereditary Prince of Brunswick had left Petershagen with 10 sqns, 7 bns and 16 guns. His task was to cross the Wiehen Gebirge and strike eastwards against Contades's communications south from Minden.

On July 28, the Hereditary Prince reached Lübbecke, had a small fight with a party of French hussars (Turpin Hussards and Bercheny Hussards), and drove them back.

On July 29, the Hereditary Prince, arrived at Riemsloh, where he was joined by Dreves and Schlieffen. His force now amounted to some 9,700 men.

Contades, hearing of the clash of Lübbecke, sent Lieutenant-General the Duc de Brissac with some cavalry and infantry and at least five guns to Bünde (14 km west of Gohfeld). The cavalry of the Volontaires du Dauphiné was charged to maintain communication between d'Havré's and Brissac's corps through the vale of Bergkirchen.

The French initially occupied a strong advanced defensive position at the bridges over the Else in the area of Bünde northwest of Herford.

On July 30 near Bünde, the French drove back a first attack of the Allies. Brissac's task had first been the protection of an important convoy of money and supplies on its way from Herford to Minden. The convoy was safe.

The Duc de Brissac, however, was ordered to retreat east to immediately secure supplies through the main road. His task was now the defence of the life-line of Contades's army.

On July 31, the Hereditary Prince and General Dreves established themselves between Kirchlengern and Quernheim, threatening the lines of communication between Minden and Paderborn and Kassel, cutting all supplies coming from the south to Contades's Army at Minden.

In the evening, Brissac's Corps took position at Gohfeld with the Werre River to its front, to protect the "Gohfelder Werrebrücke".

The Hereditary Prince decided to attack Brissac the next morning, at 3:00 a.m (just as the battle in the Minden plain was starting).

In the night of July 31 to August 1, the Duc de Brissac received a message from Maréchal Contades, informing him that the Allied corps advancing against him was numerically superior to his own, and recommending him to take position between Gohfeld and Bergkirchen.

To put this engagement in perspective, this map of the district of Minden, dating from 1772, locate the battle of Minden (red rectangle) and the engagement at Gohfeld (purple rectangle): 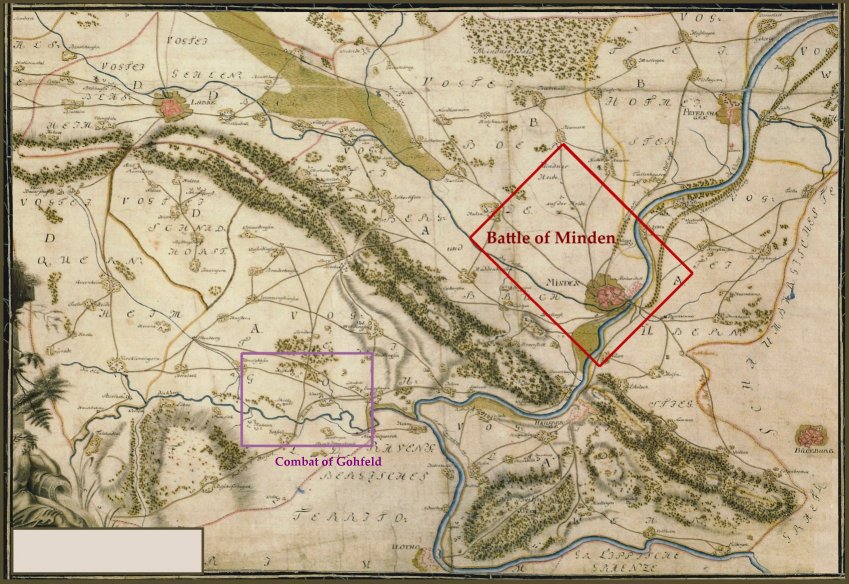 Another map of the area of Gohfeld, dating from 1834, shows the Werre River in blue, the stone bridge of Gohfeld (red circle) and the Haus Beck (green circle). Please note the information about the location of the engagement (black rectangle on the center of the map). 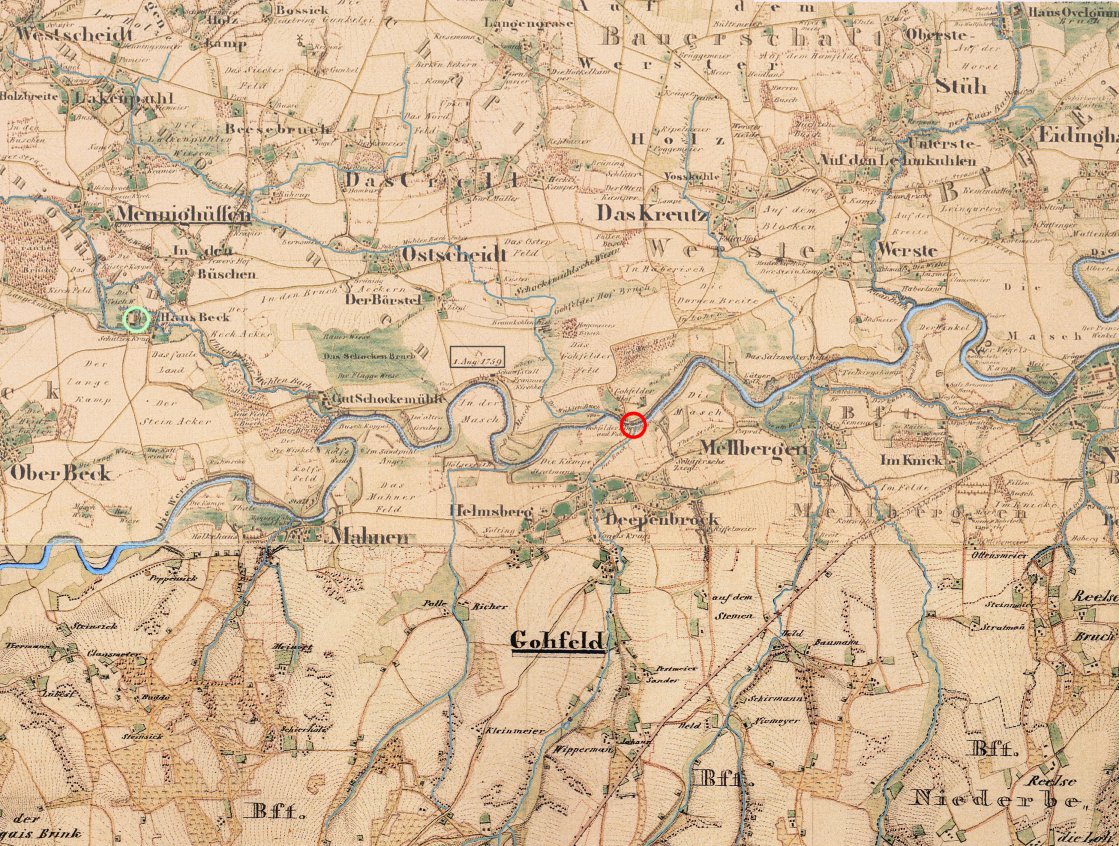 Area of the engagement of Gohfeld from a 1834 map. Source : Frédéric Aubert

The situation of the main features are :

On August 1 at 3:00 a.m., the Hereditary Prince set off from his camp at Kirchlengern. His plan was to envelop both of Brissac's flanks and cut the roads behind him. For this purpose, he divided his troops into three roughly equal columns. The middle column under Lieutenant-General Count Kielmansegg was to march north of the Werre on the Gohfeld bridge and take the French positions under fire with the bulk of the guns. The right column, led by General Dreves and the Hereditary Prince himself, was initially to cross the Else at Kirchlengern, then cross the Werre at the village of Löhne, advance south of the river on Gohfeld, and finally fall into the French left flank. The left column under Major-General von Bock should continue north to the Saltern Bridge (now Bad Oeynhausen, located east of Gohfeld) to cut the communication of the Duc de Brissac with Minden and to prevent an eastwards retreat of the French.

When Brissac was informed of the advance of Kielmansegg's column, he crossed the Werre to face him, hoping to take advantage of the plain on the northern bank of the river to deploy his cavalry.

When Count Kielmansegg came out of the defile of Beck, he inadvertently came into contact with the French, much earlier than planned and, initially, without any support. The Breidenbach Dragoons carried a first attack, which was beaten back by the French cavalry.

The combat became a long artillery duel in which the vastly superior artillery of the Hereditary Prince soon established its dominance. The cannonade would last for two hours.

Brissac's cavalry charged but was repulsed by the Hanoverian Alt Zastrow Infantry. Despite his inferiority in guns, the Duc de Brissac wanted to hold his position as long as possible, so that the troops of the Hereditary Prince could not advance on Minden and intervene in the ongoing battle.

Around 7:00 a.m., after noticing that the Kielmansegg’s forces were spread out over a wide area, the Duc de Brissac ordered his cavalry to attack the centre of Kielmansegg’ positions, which he considered rather weak. In fact, the attack delivered under heavy fire broke through Kielmansegg's first line. However, the preparations for the attack had not gone unnoticed, hastily deployed infantry reserves inflicted heavy losses on the French cavalry and threw them back again. And Brissac's guns were finally silenced.

During the confrontation between Kielmansegg and Brissac, the right column of the Allies (Dreves and the Hereditary Prince) had crossed the Werre near the mill of Behmer, near Bermbeck to the southeast of Kirchlengern, and advanced by way of Bischofshagen, south of Löhne, against the bridge of Gohfeld, which was defended by only 2 grenadier coys. On his way, he was slightly delayed by French hussars,

When Brissac saw that his left had been turned, he considered that his position had become untenable, and ordered a withdrawal northwards, in the direction of Bergkirchen.

While retreating, and with Kielmansegg's column on their heels, the French came under the fire of the regimental artillery of the Allied left wing under Major-General von Bock, coming from the north. Completely surrounded, Brissac's force broke and routed either north over the Bergkirchen Pass, or back to Rehme and Minden. The Busche Dragoons captured five 4-pdrs.

The planned dismantling of the French corps was thus largely successful.

When he heard of Brissac’s defeat, the commander of the large baggage train of the French army, which was assembled at Rheme, had the bridge over the Werre near the salterns to the west of Rehme burned down and retreated precipitously to Vlotho.

Contades's line of communications towards Herford was now cut off and the situation of his main army had become quite precarious.

The Allies captured 5 guns and all the baggage.

Losses are not known, but the French had 300 men taken prisoners.

Immediately after the engagement, the Hereditary Prince took position near the vale of Bergkirchen.

The same day (August 1), the army of Ferdinand of Brunswick defeated the main French army in the Battle of Minden. The events at Gohfeld prevented Contades from retreating southwestwards, where he could possibly have reorganised more quickly. Since the Hereditary Prince had already cut the line of communication from Minden to Paderborn, where the French had considerable magazines, the main French army was forced to retreat through countries where it had no subsistence. It gradually retreated towards Kassel, where it remained idle for the rest of the year.

The young Hereditary Prince Karl Wilhelm Ferdinand von Braunschweig had proved himself to be a capable army commander; he later brought it to the Prussian field marshal and commander-in-chief (Auerstaedt). The Duc Jean-Paul-Timoléon de Brissac could not be blamed for his defeat in front of a numerically superior enemy, he would eventually receive the title of maréchal de France. The same was true of the later Secretary of War, Philippe-Henri de Ségur, who had led the French infantry at Gohfeld.

Note : On the battlefield at Gohfeld or Mennighüffen-Ostscheid, around 1900 skeletal remains and combat tools such as cannonballs and weapons were found. Part of the area is still called "blood meadow" today. A memorial stone on the Börstelstraße reminds of the events.

Summary: 4 battalions, 12 squadrons, 3 regiments of Volontaires (Infantry and Dragoons) and a few guns for a total of about 6,500 men.

Hotham, The operations of the Allied Amy under the command of his Serene Highness Prince Ferdinand Duke of Brunswic and Luneberg beginning in the year 1757 and ending in the year 1762, London: T. Jefferies, 1764, p. 98

Frédéric Aubert for improvements to the initial article