On August 18 1759, Prince Henry, who had lost his line of communication with Frederick II, was finally informed of the defeat of Kunersdorf (August 12). He immediately endeavoured to open communication with Frederick. To do so, he resolved to walk through Upper-Lusatia, behind the lines of Field-Marshal Count Daun, to cut him from his magazines and to make a junction with Frederick's army in Saxony. Accordingly, Prince Heinrich recalled 7 bns and 3 squadrons from Landeshut (today Kamienna Góra) to reinforce his own army. He then left General Stutterheim at Lowenberg under the command of Fouquet whose corps remained at Landeshut.

On August 27, Prince Henry marched with 30 batallions and 58 squadrons towards Lusatia. The same day, the Gersdorff Hussars skirmished with Beck's light troops. General Beck evacuated Sprotau, which was soon occupied by the advancing Prussians.

On August 28, the Prussian General of Cavalry von Zieten arrived at Sagan with the vanguard. His troops camped in and around the town. The bridge at Sagan, which had been broken by the Austrians during their retreat, was repaired. The same day, the main Russian army finally quitted Lossow and marched towards Saxony.

On August 29, Prince Henry reached Sagan while Zieten marched to Sorau (today Żary), capturing 84 hussars and 3 officers on his march. Meanwhile, General Bulow occupied Naumburg with 6 batallions and 5 squadrons. Daun, fearing for his communication with the Russian army, ordered general Buccow to leave Lauban and to join him at Triebel. He also ordered the Marquis d'Aynse to march to Priebus. However, when Zieten appeared at Sorau, Daun retired behind the Neiss without waiting for these reinforcements, joining Buccow at Moska. By doing so, Daun had left the magazine at Guben unprotected but Zieten did not seize this opportunity. 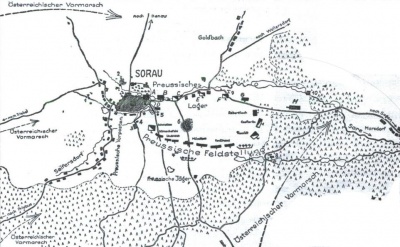 On August 30, Daun resolved to attack Zieten. Daun's plan called for an advance of Beck's corps from Wiesen to the defile of Buschmuhle (a water-mill on the stream running through Sorau) on the road to Sagan behind the Prussian lines, for Esterhazy's corps to march from Sommerfeld against the Prussian right flank and for Daun himself to attack frontally with the main Austrian army. Zieten got information from a reconnaissance led by general Czettritz who had clashed with Daun's vanguard at Triebel, taking 73 prisoners.

On September 1, supply and baggage wagons arrived at Zieten's camp. The same day, Beck's vanguard reached the Buschmuhle but was repulsed by Freibattalion Salemnon sent there by prince Henri along with a detachment of 200 hussars.

On September 2, Zieten was posted in the little town of Sorau while Daun was secretly marching on him in three converging columns.

Zieten's patrols had totally failed to spot the advancing enemies. Therefore, Zieten was not expecting an Austrian attack. However, prince Henri's hussar party who had clashed with Beck's vanguard the previous day informed Zieten, bringing along 30 prisoners as a proof.

At daybreak, Zieten's patrols finally sent many reports about Austrian troops advancing in the direction of Sorau. General Czettritz with 200 horse went out to reconnoitre their movements and confirmed their approach

Indeed, 50,000 Austrians were converging from west, south-west and south upon Zieten's positions at Sorau.

Freibattalion Salemnon and DR4 Czettritz Dragoons, which were initially part of the vanguard, were left behind at the Buschmuhle with the rearguard to cover the retreat. These two units took the full brunt of the attack.

Indeed, the Austrian infantry couldn't come into contact but their cavalry charged DR4 Czettritz Dragoons and the Prussian infantry of the rearguard several times. Freibatalion Salemnon distinguished itself by defending the bridge at Buschmuhle.

When the last Prussian battalions had finally crossed the bridge, volunteers from Freibatalion Salemnon formed square to delay the Austrian hussars and dragoons.

Freibattalion Salemnon lost about 15 men, Czettritz Dragoons lost only a few men but it included captain Beauvre who had bravely commanded the rearguard, covering the retreat of Zieten's entire corps.

Daun had hesitated before finally turning back his own divisions and returning to his camp at Triebel. Most units of Beck's column were delayed and Zieten had enough time to escape the trap and to join prince Henri at Sagan. Beck took position at Wolfsdorf to cover the main Austrian army.