During the winter of 1758-59, the Prussians, who until then were devoid of any naval force, built a small fleet at Stettin (present-day Szczecin/PL) by transforming some fishing and transport boats into military vessels. The flotilla was launched on April 5, 1759. Informed of the preparations of the Prussians, the Swedes decided to destroy this small naval force before it could become a threat to their hitherto uncontested naval supremacy.

In mid-August, General Lantingshausen assembled most of the Swedish army in a camp near Loitz. Another large detachment under Major-General Count Hessenstein was encamped neat Ziethen, north of Anklam for an offensive in Prussian Pomerania. Simultaneously, Lieutenant-General Count Fersen with 4,000 men (including 2,300 men transported aboard the flotilla) would advance from Wolgast and in conjunction with a Swedish flotilla make himself master of the islands of Usedom and Wollin.

On August 16 in the evening, the Swedish galley flotilla, under Major-General Wilhelm von Carpelan, reached the Ruden Island. On August 17, it entered the Peene River. Count Fersen charged Carpelan, to sail up the Peene River and to disembark his land troops at Gummlin, near the town of Usedom.

On August 20, the Swedish galleys moved upstream the Peene River to enter the Stettiner Haff (Stettin Lagoon). Captain Ernst Mattias von Köller, who commanded the Prussian flotilla, deployed it south of Ostklüne at the sole entry of the lagoon, in an area where its depth was a little more than two meters. It opened on the Swedish flotilla. The Swedes disembarked two 24-pdrs and Fersen provided 8 additional heavy guns to support the galleys.

On August 26, the Swedes captured Swinemünde (present-day Świnoujście/PL). The loss this place had dire consequences for the Prussian flotilla. Until then, it had manage to interdict the Stettiner Haff to the Swedish galleys. Only smaller Swedish craft could enter the lagoon, by crossing the shallow water at the foot of the Ostklüne battery. However, when Captain von Köller heard of the capitulation of Swinemünde (the report falsely claimed that the Prussian entrenchments on the east bank of the Swine had also been taken), he decided to retreat fearing to be cut from his bases by Swedish galleys entering the lagoon by way of the Swine River.

In the night of August 27 to 28, the small Prussian flotilla retired from Kuhlerort and took refuge in the Papenwasser at the mouth of the Oder. When Köller heard that the entrenchment on the eastern bank of the Swine, opposite Swinemünde, where still in Prussian hands, he decided to defend the narrow passage between the Woitziger Haken and the Repziner Haken between Neuwarp and the island of Wollin, to prevent the Swedish flotilla from entering the Great Lagoon.

During the following days, Fersen made sure that the galleys of the Swedish flotilla were gradually moved into the Stettin Lagoon. He also placed land troops on board.

On September 1, the Swedish flotilla anchored to the northwest of Ückermünde. Headwinds and bad weather induces the Swedish commanders to postpone the decisive engagement against the much weaker Prussian flotilla, despite Fersen’s repeated orders to engage the enemy.

On September 4, the Swedish flotilla anchored near the Kuzower Haken of the Island of Usedom.

On September 5, the Swedish flotilla advanced to the Ruchbar-Schaar, a large sandbank to the southwest of Kamminke.

On September 10, Carpelan decided to engage the Prussian flotilla. 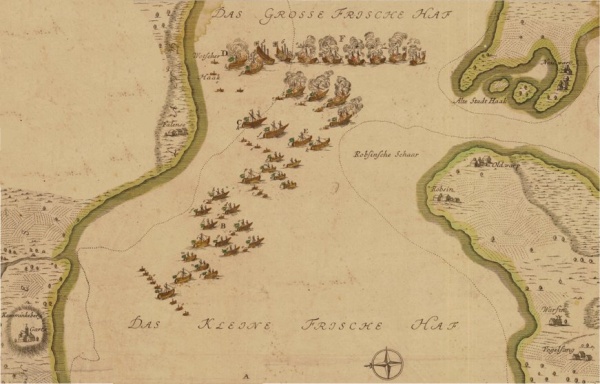 At its narrowest point the strait formed by the Neuwarp Point between the Great and Small Lagoons measures some 7½ km and considerably restricts the navigation of large ships.

On September 10, the Swedish squadron (28 vessels) led by Captain-Lieutenant Karl Rutensparre, penetrated into the Stettin Lagoon, resolved to attack the Prussian flotilla (12 vessels).

The Swedish ships were deployed in 4 lines.

For their part, the Prussians had 4 12-guns galiots and 4 12-guns galleys as well as 4 gunboats. Both wings leaned against the shallow waters. The Prussian vessels were deployed in 2 lines:

Once within range, the Swedes placed themselves in a single line. The Swedes decided to concentrate their attack against the Prussian right wing. Their galleys advanced in echelon across the strait towards the Prussian flotilla, with the Cronoberg on the extreme left and the Blecking, Malmö and Carlskrona deployed to her right. The Cronoberg was followed by the two demi-galleys Svärdfisk and Stör deployed side-by-side. On their right wing were two other demi-galleys: the Delphin and the Cabeljau along with a bomb-galiot and 3 launches (???). The rest of the vessels and gunboats were deployed in third line.

The 3 Swedish demi-galleys and 9 gunboats following the right wing were initially charged to reconnoitre the coast near Altwarp where sail had been spotted. The Swedish commander also wanted to know if the Prussians had established coastal batteries. The Swedes searched the Neuwarp lagoon for armored vessels but found only neutral ships. Furthermore, they did not discover any coastal battery. Nevertheless, this manoeuvre deprived the Swedish squadron of several vessels at the opening of the combat.

As the Swedes approached, the Prussian admiral ship (Koenig von Preussen) hoisted a red flag to signal engagement, and soon the first cannon thundered across the water.

At 9:45 a.m., as the Prussian flotilla came within range of its 24-pdrs, the Swedish vessels opened fire.

The Prussian artillery, although operated by inexperienced gunners, held up well, and the cannonade lasted about two hours, during which the Swedes gradually moved closer, allowing their small caliber guns to also intervene in the combat. During this duel, the Prussian Mars sank a Swedish gunboat and the galiot Prinz von Preussen was badly damaged.

Around noon, Carpelan gave orders to the two demi-galleys following his left wing to board the two small Prussian galleys (Jupiter and Merkur), which were forming the right wing of the Prussian first line. A bitter hand-to-hand combat ensued, which was fought at close range with muskets and hand grenades. The two Prussian galleys were finally overpowered.

With the Prussian right wing defeated, Carpelan decided to turn his attention on the Prussian left wing. The large galleys Carlskrona and Malmö, followed by the smaller vessels of the Swedish right wing, started to advance.

Thereupon the Prussian Neptun and Mars turned and fled. The much damaged galiot Prinz von Preussen stroke her colours. The 3 other galiots set sail and tried to escape.

The superior seamanship of the Swedes began to tell against the improvised Prussian flotilla. Their skillfully maneuvering ships pursued the Prussian vessels, which fell into their hands one after the other.

The admiral ship Koenig von Preussen, under Captain von Köller,was the last to resist. It finally surrendered after an hour.

After the defeat of the vessels of the Prussian first line, the Swedes turned their attention against the 4 Prussian gunboats forming the second line and pursued them. The Prussian gunboats managed to escape. One of them (the Esping Nr. 3) reached the beach of Schminz (present-day part of Stepnica/PL), and its crew disembarked and fled before the arrival of the Swedes, who captured the gunboat.

The battle had lasted 4 hours and ended in a heavy Prussian defeat.

The Prussians were now unable to support their isolated positions at Usedom and Wollin. The Swedes soon took advantage of the situation to capture these two places.

After the battle, in the vicinity of the Danish island of Bornholm, Prussian prisoners (27 soldiers and 133 sailors) on their way to Sweden aboard the Sköldpadde (34 sailors) managed to escape and to capture the galiot and brought her back to Colberg.

Meanwhile, undaunted, the Prussians began to build a new fleet.

This article contains text from the following article:

Tomasz Karpiński (student at the Institute of History, University of Adam Mickiewicz in Poznań, Poland) for his collaboration for the initial version of this article

Gunnar W. Bergman for additional information on this combat