Prelude to the raid

In August 1759, General Lord Jeffrey Amherst, in an attempt to communicate with Brigadier-General James Wolfe who had under taken the Siege of Québec, sent Captain Kennedy of Moncton's Foot with Lieutenant Hamilton of the II./Royal, Captain Jacobs and four Mahican rangers through the settlements of the Abenakis south of the Saint-Laurent River.

On September 10, Amherst was informed that Captain Kennedy and Lieutenant Hamilton had been taken prisoners by Abenaki warriors of Saint-François; and that another party under Lieutenant Fletcher and three men had been captured by 70 Native American warriors (probably Abenakis) who also killed the three men of his party.

On September 12, Amherst ordered a detachment of 220 rangers (Rogers' Rangers) under the command of Major Rogers to destroy the Saint-François settlements and the French settlements on the south bank of the Saint-Laurent River. Amherst explicitly instructed Major Rogers not to kill or hurt any women or children.

The village of Odanak or, as the French named it, Saint-François, was located on a bluff above the Saint-François River (Arsikantegouk) a few km above its junction with the Saint-Laurent. The village was founded around 1670 by Sokoki Abenaki people and became a place of refuge for many native nations from encroachment of their homelands by land hungry colonists, and as a result of King Philips War. From here many war parties had gone south in search of retribution and captives. By 1759, the Abenaki village consisted of 51 houses built in the English or French style. Most homes were constructed of squared log timbers covered with lengths of bark or rough-cut boards. At least 12 were one or two-story French-style wood-frame houses with clapboards; three houses were built of stone. They were arranged in rows around a central square, with a church and a large Council House.

Rogers and his rangers set out in whaleboats and, eluding the French armed vessels, then in full activity on Lake Champlain. On the second day 34 sick or disabled men and seven escorts were returned to Crown Point (former Fort Saint-Frédéric). On the tenth day, the whaleboats came to Missisquoi Bay, at the north end of the lake. Here Rogers hid his boats, leaving two Stockbridge Mahican rangers to watch them from a distance, and inform him should the enemy discover them. He then began his march for Saint-François, when, on the evening of the second day, the two Mahicans overtook him with the startling news that a party of about 400 French had found the boats, and that half of them were on his tracks in hot pursuit. It was certain that the alarm would soon be given, and other parties sent to cut him off. Rogers took the bold resolution of out-marching his pursuers, pushing straight for Saint-François, striking it before succours could arrive, and then returning by Lake Memphremagog and the Connecticut River. Rogers despatched Lieutenant McMullen and six men by a circuitous route back to Crown Point, with a request to Amherst that provisions should be sent up the Connecticut to meet him on the way down.

On October 1, a force of 100 Abenaki men men and French soldiers set out from Saint-François to search for Rogers’ men. Following information, that claimed that the attack would come from the north, they went north along the Saint-Laurent River to Wigwam Martinique. At that time the intelligence was correct, but Rogers had changed his plans after the loss of his boats and some 77 of his men.

Then Rogers set his course for the Abenaki town, and for nine days more toiled through the forest with desperate energy. Much of the way was through dense spruce swamps, with no dry resting-place at night. Seven more men were lost. At length the party reached the River Saint-François, 24 km above the town, and, hooking their arms together for mutual support, forded it with extreme difficulty. Towards evening, Rogers climbed a tree, and descried the town 4 to 5 km distant. Accidents, fatigue, and illness had reduced his followers to 142 officers and men. 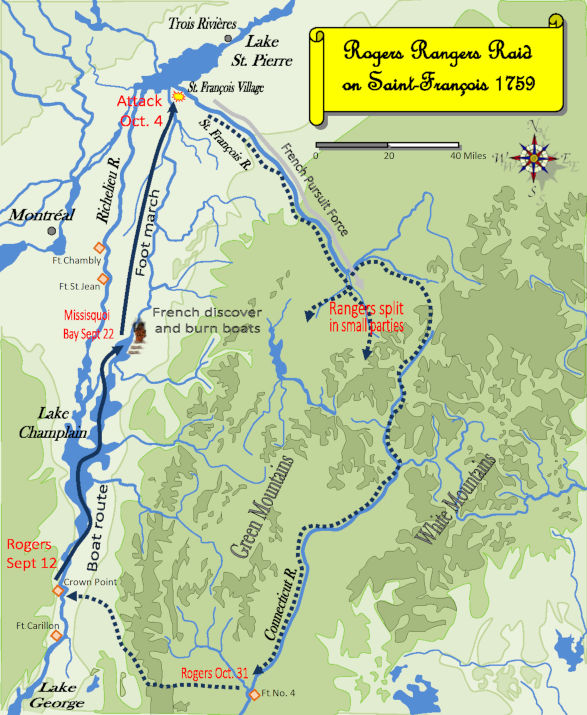 On arrival on October 3, Rogers left his rangers to rest for a time, and, taking with him Lieutenant Turner and Ensign Avery, went to reconnoitre the place. There had been a dance taking place in the Council House that night. Whilst at the celebration one of the Mahican rangers, Samadagwis, entered the town to give warning of the impending attack to a young teenage girl (Maliazonis). Earlier that day some Abenaki women washing in the Saint-François River spotted wood chips floating on the water – oral traditions suggest that these might have been from rafts or bridges that Rogers’ men built to facilitate crossing the river near what the Abenaki called the “little woods” around Saint-Joachim. Most Abenakis heeded the Mahican’s warning and during the night crept away in small numbers at a time to avoid detection. More than a hundred gathered in hiding near the ravine at Sibosek.

On October 4 at 2:00 a.m., Rogers rejoined his party, and at 3:00 a.m. led them to the attack, formed them in a semicircle, and quietly rushed across the fields and bursted in upon the town half an hour before sunrise. In the town, Rangers claimed that there were 500 to 700 scalps dangling from poles over the doors of the houses and the church. Rangers were deployed outside houses and others overlooking the river in order to shoot down escapees running in that direction. An accidental discharge started the massacre. Sergeant Maxwell stated that: “All the warriors were out hunting. It became easy prey for us. We found only old men, children, and [women].”

Those that disregarded the warnings had dispersed and were asleep in their houses when the Rangers forced entry. Some were killed in their beds, and some shot down in trying to escape. A few others had remained to defend the Council House. The town was pillaged and burned, including the church, except for three houses which contained supplies of corn. The Council House, which showed evidence of being fired upon, also survived until 1915.

Around dawn, about 7:00 a.m., the affair was completely over. According to Rogers, the Abenakis lost about 200 men while 20 of their women and children had been taken prisoners. Later, Rogers freed 15 of the prisoners. He also retook five British captives. However, given that most men were absent from the village at the time and Rogers’ want to exaggerate enemy losses, this figure is very likely to be highly inflated not least to preserve his reputation and the high cost to the Rangers. A French officer of the Béarn Infanterie recorded in his Journal that the Abenaki losses were few. The Abenaki traditionally admit that of the approximately 40 people who stayed behind in their houses, 32 died, most of them women and children. Even so, a devastating number for the Abenaki. When Rogers left Saint-François, he took with him at least six Abenaki people as captives, including Marie-Jeanne Gill, wife of Chief Joseph Louis Gill, and five children, two boys and three girls or young women.

On the side of the rangers, Captain Ogden and six men were wounded and a Mahican from Stockbridge, Samadagwis, was killed. Rogers was told by his prisoners that a party of 300 French and Native Americans was encamped on the river below, and that another party of 250 men was not far distant. There was no time to lose...

The rangers made all haste southward, up the Saint-François, subsisting on corn from the Abenaki town till, near the eastern borders of Lake Memphremagog, the supply failed, many of the Rangers having taken loot rather than corn. They separated into small parties, the better to sustain life by hunting. However, they found the wilderness unusually barren of wildlife. Along the way one Abenaki boy was killed and cannibalised as was one captive woman, Marie-Jeanne Gill. The Abenaki and French followed close, attacked Ensign Avery's party and captured five of them, then fell upon a band of about 20, under Lieutenants Dunbar and Turner, and killed or captured nearly all. The other bands eluded their pursuers, turned south-eastward, reached the Connecticut, some here, some there, and, giddy with fatigue and hunger, toiled wearily down the wild and lonely stream to the appointed rendezvous at the mouth of the Upper Ammonoosuc where Rogers had requested that provisions might be sent. However, no provisions were found there. Indeed, Lieutenant Stephen had moved up the river from Charlestown with an abundant supply of food but, finding nobody at the Ammonoosuc, he had waited there two days and then returned, carrying the provisions back with him. For this outrageous conduct Stephen was expelled from the service.

Leaving his party behind and promising to send then relief within ten days, Rogers made a raft of dry pine logs, and drifted on it down the stream, with Captain Ogden, a ranger, and one of the captive Abenaki boys. They were stopped on the second day by rapids, and gained the shore with difficulty. At the foot of the rapids, while Ogden and the ranger went in search of squirrels, Rogers set himself to making another raft; and having no strength to use the axe, he burned down the trees, which he then divided into logs by the same process. Five days after leaving his party he reached the first British settlement, Charlestown, or "Number Four," and immediately sent a canoe with provisions to the relief of the sufferers, following himself with other canoes two days later. Most of the men were saved, though some died miserably of famine and exhaustion. The few rangers who had been captured were killed by the Abenakis warriors. Of the 142 Rangers who had reached Saint-François at least 49 died of wounds or starvation during the retreat.

Contrary to Rogers’ assertions the Abenakis were not destroyed and raided into Charlestown the following year carrying off captives to Canada. Following the raid, the burned village of Saint-François/Odanak was not habitable for the oncoming winter, so the refugees relocated to the Mohawk village of Saint-Régis/Akwesasne.

On the day of the raid, the force had already been reduced:

In the settlement of Saint-François/Odanak on the day of the raid:

This article contains text from an abridged and adapted version of the following books, which is now in the public domain:

Bruchac, Margaret: Founding Schaghticoke and Odanak. Raid on Deerfield: The Many Stories of 1704, 2005, pp 6-7. Retrieved from https://repository.upenn.edu/anthro_papers/145

Charles Mayhood for the reasons leading to the raid

Larry Burrows for additional information on the raid