Prelude to the Combat

On November 21, 1759, the Prussian General Hülsen was at Dippoldiswalde with reinforcements when he heard of Finck's capitulation after the Battle of Maxen. He immediately retired to Freiberg while Frederick II sent 4 bns to Mohorn to keep communications with Hülsen open.

Field Marshal Leopold Daun then cantoned the Austrian main army near Dresden while the Reichsarmee retired by way of Bohemia towards Franconia to take its winter-quarters. Meanwhile, Frederick took position in front of the Austrians. His vanguard (9 bns, 24 sqns) was at Kesselsdorf; his first line (23 bns) between Wilsdruff and Limbach; his second line (8 bns) in the neighbourhood of Blankenstein and Meissen; his third line (28 sqns) near Herzogswalde; his reserve (11 bns, 35 sqns) under Hülsen near Freiberg. Frederick also detached Diericke with 6 bns and 1,000 horse at Cölln (now a quarter of the city of Meissen) on the right bank of the Elbe, in front of Meissen, to secure the road leading from Torgau to Berlin. 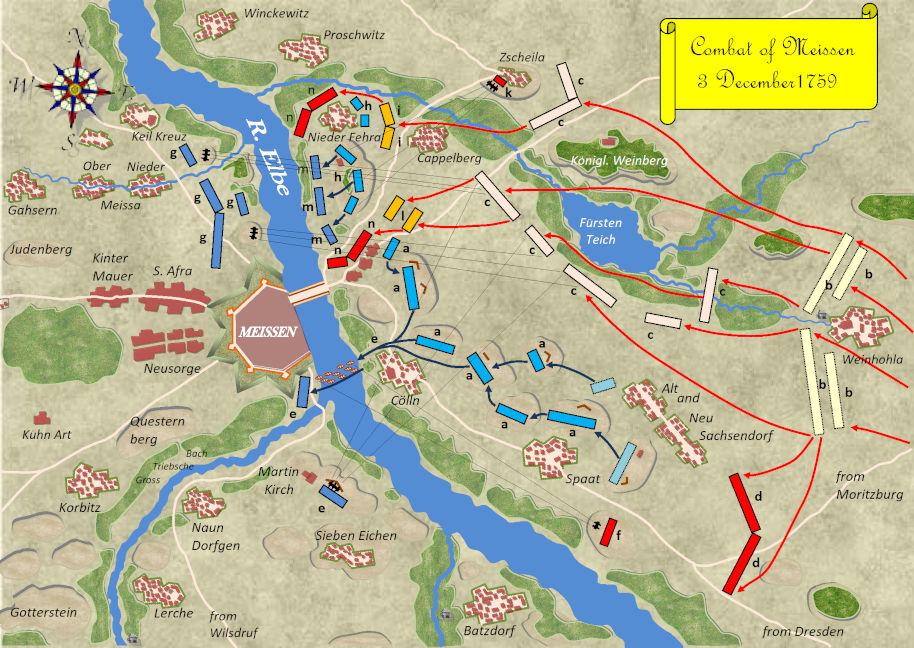 Map of the Combat of Meissen fought on December 3, 1759 - Copyright Dinos Antoniadis

Key to the map

In the end of November, suddenly warmed up, Daun resolved to attacked Diericke's isolated detachment. To do so, he recalled Beck's Corps (6,086 men, including 2,221 Grenzers from the Banal-Grenzinfanterieregiment nr. 1 under Colonel Zedtwitz and Warasdiner-Sankt Georger under Colonel Riese) from Zittau. Furthermore, since Diericke occupied a very advantageous position on the heights of Zaschendorf and Spaar, Daun reinforced Beck's Corps with Pellegrini's 5 bns and 500 carabiniers.

In the night of December 2 to 3, Beck's Corps set off towards Diericke's positions.

On December 3 at 2:00 a.m., Beck reached Weinböhla in front of Diericke's positions but did not attack immediately because of the strong Prussian positions. Diericke got news about the reinforcement of the Austrians but decided to make a stand. He could not expect reinforcement because he was on the wrong side of the Elbe river. In the moonlight, his troops took positions: 2 bns established themselves on the first Fürstenberg, in front of Bohnitzsch; his other units formed a line between the hills of Spaar-Gebirge and second Fürstenberg near Zaschendorf.

Beck did not risk a frontal assault. Instead, he sent Pellegrini's detachment with two 12-pdr guns to the height of Proschwitz, overlooking the Elbe River, by way of Gröben. From this position, Pellegrini’s guns could oppose the crossing of the river sweep the Elbe, endanger attempts at crossing and prevent Diericke from retiring towards Torgau. The Grenzer light troops and Beck's Volunteers took position to the north-east of Meissen in the vineyards between Proschwitz and the Elbe.

At dawn, when the Austrians were deployed, both sides cannonaded each other without much effect. They both remained in their positions for many hours. The weather was cold and soldiers made camp-fires to warm up. Gradually, the Austrian artillery planted at Proschwitz forced the 2 Prussian bns established at Bohnitzsch to retire by way of Zscheila up to the Ratsweinberg between Cölln and Nieder-Fehra.

Diericke had not reacted promptly enough to evade the threat of the superior enemies (a 3 to 1 superiority) advancing against his small corps. Prussian positions were now much threatened and it was time to retreat. The Elbe River, which was covered with floating ice, was now his only line of retreat, using boats.

In the evening of December 3, King Frederick who had been informed of the situation by Lieutenant Götzen, sent a small reinforcement of 2 bns (Prinz Ferdinand or Alt Braunschweig regiment) with 6 heavy guns to support Diericke. This reinforcement took position on the left bank of the Elbe to the north and south of Meissen. Its artillery silenced the Austrian guns planted at Proschwitz and Pellegrini was forced to move back to Zscheila where his guns resumed their cannonade.

In the night of 3 to 4 December, under a bright moonlight, Diericke’s troops began to be ferried across the Elbe, much impeded by floating ice. The cavalry crossed first, followed by the heavy artillery with the infantry closing the march. The troops who managed to cross to the left bank took up positions on the heights between Siebeneichen and Meissen.

On December 4, the crossing of the Elbe was not yet finished when daylight came. The last Prussian bns were forced to retire from Fürstenberg and to occupy the village of Cölln and the Ratsweinberg on the right bank of the Elbe.

At daybreak, Beck sent Colonel Zedtwitz at the head of 4 grenadier coys, 1 bn of Banal-Grenzinfanterieregiment nr. 1 and Lieutenant-colonel Lumago with 2 bns of Joseph Esterházy Infantry to attack frontally the 3 Prussian bns (1 bn of Anhalt-Bernburg, 1 bn of Kanitz Infantry and 1 bn of Hauss Fusiliers) still posted in an isolated position on the right bank of the Elbe. Meanwhile Colonel Riese with 1 bn of Warasdiner-Sankt Georger Grenzer advanced through Broschwitz against the rear of their positions. For his part, General Nauendorf and his hussars took possession of the Prussian baggage in Nieder-Spaar after driving back the Prussian troops protecting it. The first assault of the grenadiers and of the 2 Grenzer bns was repulsed.

Soon, 6 Austrian line bns prepared to launch another attack. However, Colonel Zedtwitz and Riese renewed their assault and, without firing a shot, stormed the village of Cölln and the Kapellenberg at the point of the bayonet.

The 3 Prussian bns under General Diericke, who had sent their colours to the left bank of the river, resisted for over two hours on the Ratsweinberg. They could not be properly supported by the 6 Prussian guns posted too far away on the left bank.

The Prussian troops occupying the village of Cölln were forced to evacuate it and to retire to the Ratsweinberg, closely followed by Grenzer light troops. The 1,500 Prussian defenders, who were now attacked in the rear, finally surrendered. Diericke had been wounded during the combat. During the fight, the Banal-Grenzinfanterieregiment nr. 2 distinguished itself.

During this combat, the Austrians lost only 1 officer and 71 men killed and 3 officers and 112 men wounded (these figures probably take into account only the losses incurred on December 4). Beck and Pellegrini captured Major-General von Diericke along with 49 officers, and 1,494 men from:

After this new defeat, Frederick asked to Ferdinand of Brunswick to send him reinforcements.