The campaign lasted from July to November 1759

Preparation for the Campaign

For 1759, the French planned three distinct invasions of the British isles, hoping to divert the attention of the British Navy from America and the East Indies:

However, at the beginning of the year, the French still had to collect as large a naval force as possible at Toulon under de La Clue and then send it round Gibraltar to join her main fleet, under the command of Conflans, at Brest. The fleet at Toulon counted about 12 ships of the line, a third of which had been disarmed for lack of money. The fleet at Brest counted 21 ships of the line.

On May 21, George II sent a message by William Pitt to the House of Commons to ask it to enable him to defray any extraordinary expenses for the war for the year of 1759.

On May 24, the British House of Commons granted the king nearly 13 millions £. The precise break down of these grants is illustrated in the following table.

Expecting a French invasion, the British had several regiments deployed across Great Britain. As of May 30, British troops were deployed as follows:

Furthermore, the militia was embodied in preparation for these potential invasions and the British navy took several measure to counter these threats: 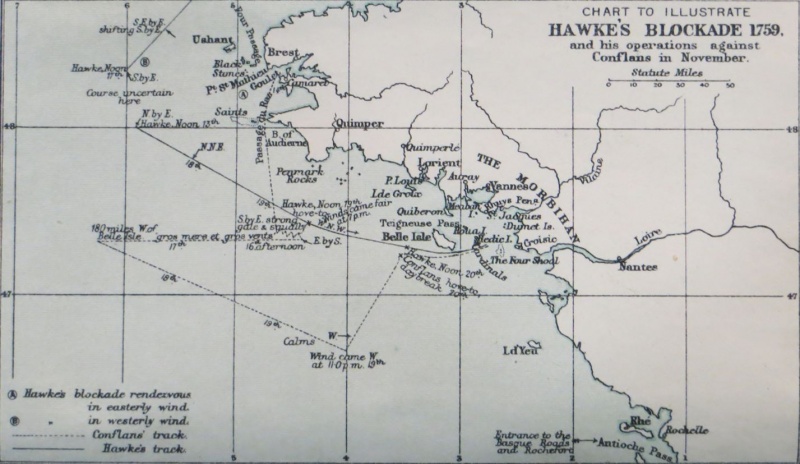 Map of Hawke's Blockade of Brest in 1759
Source: Julian S. Corbett England in the Seven Years' War – A Study in Combined Strategy 1907
Courtesy of Tony Flores

In June, Admiral Sir Edward Hawke sailed with a fleet of 25 ships of the line and many frigates to blockade or, more strictly, to observe the French fleet in Brest. He cruised some leagues at sea, leaving an inshore squadron of his lighter ships, under Captain Augustus John Hervey, of the Monmouth (64), close off the port. He also detached Commodore John Reynolds, in the Firme (60), with a small squadron, to watch the French transports which had assembled in the Morbihan River in preparation for the invasion of Ireland. When at length the Firme (60) became very foul and had to go home to refit, she was relieved by the Rochester (50), Commodore Robert Duff. In the course of the blockade the Achilles (60), Captain Samuel Barrington, also had to go home, having run on a rock when in pursuit of some French vessels. It may be mentioned that, during part of the summer, Prince Edward Augustus, afterwards Duke of York, again served as a midshipman, with Captain Lord Howe, in the Magnanime (74).

During the blockade of Brest by Hawke's fleet, numerous brushes with the French took place. On one occasion the French sent out 4 ships of the line to attack the inshore squadron but Hervey, instead of retiring, went to meet them. Furthermore, the main British fleet made as if to support him and the French withdrew. The intention had been that, if Hervey had drawn off and left the coast clear, the 4 ships of the line should have gained the mouth of the Morbihan, crushed Duff and then escorted the French invasion of Ireland. Hervey and the inshore squadron continued very active, and greatly annoyed the enemy.

On July 2, the squadron of Rear-Admiral George Brydges Rodney sailed from St. Helen's to destroy the flat-bottomed boats and the supplies which had been collected at Le Havre for the projected invasion of England. Rodney's light squadron consisted of:

In the afternoon of Tuesday July 3, Rodney arrived in the bay of Le Havre and steered his fleet into the channel of Honfleur. At 7:00 p.m., 2 bomb ketches took position.

On July 4 at sunrise, with his 6 bomb ketches, Rodney began the bombardment of Le Havre and of the flat-bottomed boats. The bombardment lasted for 52 hours until July 6 at 8:00 a.m. and 1,900 shells and 1,150 carcasses were fired on the town. Le Havre burnt furiously for 6 hours despite the continual efforts of several hundred men to extinguish the fire. During the bombardment, a great number of French troops appeared and started erecting batteries and throwing entrenchments. All the inhabitants left the town. This attack totally destroyed any French preparations in this town for the invasion of England.

Rodney, with some of his frigates, remained off the port of Le Havre for the rest of the year, and captured numerous prizes.

Boscawen intercepts the Fleet of Toulon

Meanwhile, a British squadron under the command of Boscawen was conducting operations in the Mediterranean.

On August 18, Boscawen managed to intercept it and, during the Battle of Lagos, he drove it ashore on the coast of Portugal with heavy losses.

The other invasion squadron, under Amiral Conflans, continued to wait in Brest harbour. Hawke was watching this squadron since January. Conflans was commanding the last fleet France now had.

The small French expedition, which had been assembled at Dunkerque for a descent upon Scotland or Ireland and which was to be convoyed by Thurot, was blockaded throughout the summer and early autumn by a squadron under Commodore William Boys. This British squadron consisted of:

By September 3, Thurot's squadron was ready but unable to sail as planned. It consisted of the vessels:

Troops embarked aboard these vessels were placed under the command of brigadier-general M. de Flobert and consisted of:

In October, Boys' squadron was driven from his station by a gale.

On October 15 at 5:00 p.m., Thurot seized the opportunity, slipped out through a thick fog and made to the northward.

Boys followed as soon as possible but was not able to overtake Thurot. Ultimately, Boys contented himself with cruising off the coast of Scotland with the object of preventing any sudden raid there. As Thurot's destination was unknown and as there were rumours that he contemplated a blow on some port on the east coast of England, the squadron in the Downs, under Commodore Sir Piercy Brett, was ordered to Yarmouth. Brett's squadron consisted of:

Indeed, Thurot had sailed for Ostend. He then sailed for Göteborg and later Bergen. His operations in the British seas did not begin till the following year (1760).

In October the Monmouth (64), which had become very leaky, quitted Hawke's fleet which was blockading Brest and returned to England.

The approach of the season of bad weather seemed to afford the French better opportunities for putting into execution their scheme of invasion, it being impossible, in those days, for a blockading squadron, no matter how strong or how ably commanded, to always maintain its position during the autumn and winter.

On November 7, Conflans reported that he had "no money, no wood, no workers and no provisions" when he was asked to join d'Aiguillon at Vannes and to escort his army to Great Britain. Furthermore, Conflans had been forced to borrow about 3,500 men to the army to properly man his fleet.

On November 9, a violent gale of wind forced Hawke from his station near Brest and obliged him to put into Torbay. This storm proved the salvation of M. de Bompart who, with his squadron, was returning from the West Indies, and who must otherwise have been snapped up by the British fleet. Most of the men of his ships were turned over to the fleet under M. de Conflans who learnt by the arrival of M. de Bompart that the British had been driven from off the port.

On November 14 at 11:00 a.m., with the hope of being able to effect something against Commodore Duff, de Conflans put to sea in 3 divisions, each counting 7 ships of the line. Beaufrémont commanded the vanguard; Conflans, seconded by Guébriant de Budes, the main division; and Saint-André-du-Verger the rearguard. The same day, Hawke got under way from Torbay.

On November 15, Hawke was informed by Captain William McLeverty of the Gibraltar (20) (the same who 3 months earlier had warned Boscawen of the approach of M. de La Clue) that the Brest fleet had sailed and that it had been seen about 130 km N.W. of Belle Isle, steering S.E. Hawke, with strategical intuition, made for Quiberon Bay with all possible sail, rightly judging that the French would take advantage of their brief liberty in order to make for that neighbourhood, so as to free the transports which were blockaded by Duff in the Morbihan River. But Hawke was unable to proceed with the speed he desired. Wind from the S. by E. and S. drove him considerably to the westward and delayed him. The contrary wind which had baffled Hawke also retarded de Conflans, and was instrumental in saving Duff.

As soon as it became known in Great Britain that the French had sailed from Brest, the excitement was great and every effort was made to meet the situation. Orders were issued for guarding all coastal areas where the French were likely to make a descent. Troops were everywhere put in motion for this purpose. Furthermore, all ships of war in harbour were ordered out. Rear-Admiral Geary was detached with a reinforcement of ships for Hawke. Geary's squadron consisted of:

Other vessels capable of putting to sea were ordered to be in readiness at a moment's notice. Furthermore, Vice-admiral Charles Saunders, who was returning from the conquest of Québec, learnt in the chops of the Channel that the French were out and that Hawke had gone in chase of them. Saunders fully realised that no addition of forces was to be despised and, on his own responsibility, he steered for Quiberon Bay with all the sail he could set. Saunders had with him but 3 ships of the line:

On November 19, the wind became fair and Hawke ordered the frigates Maidstone (28) and Coventry (28) ahead of the fleet, one on the starboard and the other on the larboard bow.

On November 20, Conflans was met by Hawke. During the ensuing Battle of Quiberon, the French fleet was utterly defeated. When darkness fell, 4 of Conflans' ships were already lost: struck or sunk. Another 7 French ships of the line got into the Vilaine River. Finally, 8 more vessels escaped to different ports. The British captured another one.

On November 23, Hawke reconnoitred the entrance of the Villaine. Discovering 7 ships of the line and 2 large frigates about 1 km within the mouth of the river, Hawke fitted out 12 long boats to attempt burning them. However, the weather being bad and the wind contrary, the enterprise was found impracticable.

The invasion of Great Britain was no more a threat.

On November 26, Hawke sent Commodore James Young with a squadron of 5 ships to anchor in Quiberon Bay.

On November 27, Hawke detached Captain Augustus Keppel with a squadron to Basque Road, to attack such of the French as might be found there. But before the latter reached his destination, M. de Beauffremont had lightened his ships and retired up the Charente River whither the British vessels were unable to follow him. Neither in the Charente nor in the Vilaine could the fugitive ships be reached. Time, however, effected what force could not; for these ships laid there 14 months, under strict watching, till their backs were broken by thumping against the shallow bottom. Only 3 ships of the line with 3 frigates ever got out again.

Hawke was relieved by Boscawen and returned to Great Britain after an absence of ten months.

This article consists essentially of texts from the following books which are now in the public domain: