The siege lasted from from August to September 1759

At the end of July 1759, when Prince Heinrich set off from Plauen to make a junction with Frederick’s main army in Brandenburg, Saxony was only defended by Finck’s small corps (12 bns, 17 sqns); the fortresses on the Elbe were manned by weak garrisons; only Dresden was in a state to oppose some resistance. Austro-Imperials corps then procceeded to the invasion of Saxony.

On August 3, General Brentano offered Count Schmettau, the Prussian governor of Dresden, the imperial grace and a sum of 118,000 thalers in exchange for the surrender of Dresden. Schmettau indignantly declined the offer. On the same day, Finck received Frederick’s orders to immediately march to make a junction with the main army in Brandenburg. After Finck’s departure, the only remaining Prussian troops in Saxony were the garrison of Dresden and a few detachments in the towns of Leipzig, Wittenberg and Torgau.

The Reichsarmee under the Prince of Zweibrücken and two Austrian corps under [[Maquire and Brentano slowly advanced into Saxony.

On August 8, Brentano’s light corps marched from Pirna on the west side of the Elbe to the “Grossen Garten” in the suburbs of Dresden. On the opposite bank of the Elbe, Major-General Vehla, who had been detached by FML Count Maquire to reconnoitre in the direction of Dresden, reached the “Weissen Hirsch,” his light troops skirmished with Prussian outposts near the gates of the city. All road leading to Dresden were now blocked by the detachments of Brentano and Vehla.

On August 9, a request from the council and the citizens of Halle arrived in Dresden, urging Schmettau to surrender the place. Schmettau also received a letter from the Prince of Zweibrücken, who threatened to burn the suburbs and to raze Halle and the neighbouring salterns. Schmettau answered that he had orders to defend the place to the last man and to set fire to the suburbs if attacked.

On August 10, Brentano vainly renewed the offer, which he had made to Count Schmettau on August 3 for the surrender of Dresden.

On August 14, the Prussian garrison of Torgau capitulated.

On August 19, after hearing a report from his staff officers, Schmettau decided to abandon any plan to defend the new town of Dresden. All guns, which could not be transferred to the old town, were nailed. The stock of stores, which could not be transferred to the old town, remained the property of the Saxon estates. The Elbe Bridge was not blown up but a mine was installed to destroy it in case of emergency. Schmettau also received a letter written by Frederick on August 14, just after his crushing defeat at the Battle of Kunersdorf, in which he informed him that he could not count on any support and instructed him to try to maintain himself in the city but, failing which, to obtain a favourable capitulation allowing the free withdrawal of the garrison, war chest, magazine and hospital and to join his own army near Berlin.

On August 20, Frederick detached Major-General von Wunsch from Fürstenwalde with a small force to relieve Saxony.

On August 21, the Prussian garrison of Wittenberg capitulated.

By August 23, all the Prussian posts in those parts of Saxony had also fell to the Reichsarmee, not one of them capable of standing a siege of more than a few days. The Reichsarmee had now taken all the northward garrison-towns. It placed garrisons in each of these towns, monopolizing some 11,000 men for general protection of this region.

On August 23, Maquire’s Corps marched from Rothenburg to join the Reichsarmee on the Elbe for the siege of Dresden.

On August 24, the main body of the Reichsarmee (7,000 foot and 1,100 horse in 13 bns, 14 grenadier coys and 12 sqns) under the Prince of Zweibrücken finally set off from Leipzig and marched towards Dresden by way Wurzen and Hubertusburg. This corps consisted of:

On August 31, Wunsch’s relief force recaptured Torgau. The same day, the Austrian siege artillery, which had been transported from Prague on the Elbe with ample ammunition, arrived at Loschwitz near Dresden.

On September 2, Maquire offered Schmettau to resume negotiations. They both met on the Elbe Bridge and agreed to a 24 hours long ceasefire. Schmettau made it very clear that he would consent to capitulate only if all his conditions were met (free withdrawal with the war chest). Maquire rejected these conditions. 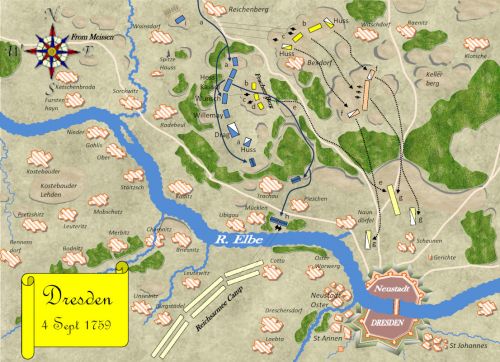 Map of the action of September 4-5, 1759, during the siege of Dresden.
Copyright: Dinos Antoniadis
Key to the map:

a The Prussians under command of Major General Wunsch marched by way of Grossenhayn and Reichenberg on Dresden
b An Austrian Corps under General Brentano advamced from Dresden and took position on the hills
c Austrian artillery harassing the Prussians while on the march
d Grenzer light troops posted on the Trachenberg are attacked and repulsed
e The Grenzer light troops retreated through the woods towards Dresden
f The Austrian Corps took position on the hills behind Bexdorf during its retreat
g Retreat towards Dresden
h Two Prussian battalions cannonaded the Reichsarmee, which was encamped on the opposite bank of the Elbe
i One battalion covered the baggage

The Prussian Corps marched away during the evening of the same day by way of Grossenhayn to Torgau, because Dresden had already capitulated and General St. Andre was marching against Torgau