In Saxony, a great number skirmishes took place during the winter of 1759-1760, due to the close proximity of the Austrian and Prussian armies.

In mid-February, FML Baron Beck proposed Field Marshal Daun to attack a Prussian detachment under Major General von Czettritz, which was posted on the eastern bank of the Elbe near Blumberg and Cossdorf (present-day Koßdorf), covering Torgau and the town in the area. Daun approved of his plan.

Czettritz was at the head of more than 1,600 horse, who were spread out in various villages up to Liebenwerda and had no infantry to support them.

On February 19 around noon, the Austrian detachment destined to the attack on Czettritz's positions set off from its quarters, north of Dresden. The corps consisted of 1,000 German horse, 800 hussars, 8 grenadier coys, and 600 Grenzer volunteers with 6 artillery pieces. In the evening, this corps reached the vicinity of Grossenhain, where men rested for a few hours. 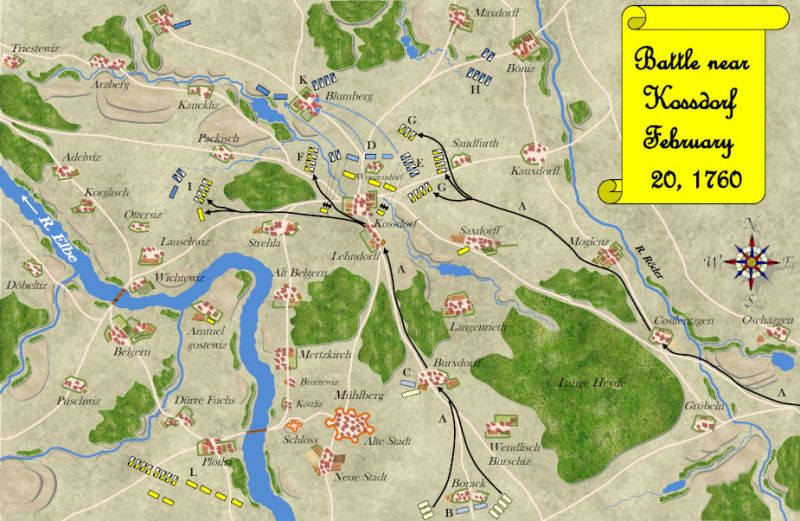 Map of the engagement of Cossdorf, fought on February 20, 1760
Copyright: Dinos Antoniadis
Key to the map:

A March of the Imperial Corps in two columns..
B In the morning of February 20, 1760, the Prussian outpost at Boragk is surprised.
C Another Prussian outpost, which is driven back on Cossdorf.
D Alarmed, General von Czettritz retire behind Cossdorf.
E Frontal attack of the Imperial General Wiese, who had marched through Cossdorf.
F Simultaneous attack of Colonel Hintzmann.
G Simultaneous attack of Colonel von Barco.
H Prussian troops advancing to support the defenders.
I Attack against other Prussian troops (including Schmettau Cuirassiers) laying idle.
K Retreat of the Prussians to Blumberg, where they rallied.
L The Imperial Corps under command of General von Simbschen, posted on the opposite bank of the Elbe to prevent the Prussians from retreating across the river.

At 11:00 p.m. on February 19, the Austrian detachment resumed its advance in two columns, crossing the Röder creek, and proceeded towards Cossdorf. The right column, under Major-General von Nauendorf, consisted of all the hussars and 250 Grenzers transported aboard wagons. It marched by way of Frauenhain to attack Czettritz's detachment in flank and rear. The left column, under Major-General von Wiese, consisted of the 2 horse rgts and 250 Grenzers transported aboard wagons. It marched by way of Wildenhain and Lichtensee along the old post road directly against Cossdorf. The rest of the infantry with the 6 guns was to follow these two columns as support up to Burxdorf, southeast of Cossdorf; 4 grenadier coys remained in Grossenhain, where they were joined by FML Beck. The precise locations of the quarters of Czettritz's troops had been determined in advance and the Austrian commanders had specified which of their troops should attack each of these posts.

Meanwhile, General von Simbschen was advancing along the Elbe towards Zscheila, Oberau and Niederau with 1,500 foot, 300 horse and 100 hussars. He sent hussar patrols downstream as far as Belgern to block all crossing points.

The left column first met a patrol of Prussian officers, who had taken refuge in an inn near Boragk because of the stormy weather.

At dawn on February 20, the left column bumped into outposts of Czettritz's detachment between Mühlberg and Langenrieth, where the guards were about to be relieved. These guards were quickly driven back towards Cossdorf.

Alerted by the shooting, Czettritz assembled up the troops posted in Cossdorf (2 sqns of Bayreuth Dragoons and 100 hussars) and counter-attacked the advancing enemy.

Major-General von Wiese, who had reached Cossdorf with the Austrian left column, attacked Czettritz's cavalry frontally. Meanwhile, the 2 Austrian hussar rgts of the right column attacked the Prussian cavalry in flank and rear. but Lieutenant Márffy captured one standard of the Prussian dragoons. The Prussians gave way and retired towards Blumberg. During the retreat, Czettritz fell with his horse and was taken prisoner.

Colonel von Dingelstedt, who had assumed command after the capture of General Czettritz, followed the retreating Austrians up to Wildenhain. His troops then returned to their quarters.

In this affair, the Prussians lost approx. 50 men killed or wounded, 1 general, 6 officers and more than 150 men captured, 1 standard belonging to the Bayreuth Dragoons and part of the baggage of the Schmettau Cuirassiers (including their new uniforms), which also lost their 500 newly arrived remounts. During their retreat, the Austrians had a large number of men taken prisoners.

The Austrians had also captured Czettritz's personnal baggage, where they found a copy of the book "The General Principles of War," which was in fact a set of secret instructions given by Frederick II to his generals. First printed in 1753, this publication had been carefully kept secret ever since. The book would be published in Austria in 1761.

On 5 March, fearing another attack, Colonel Dingelstedt retired to new positions between Blumberg and Torgau with his detachment.

N. B.: 4 grenadier coys remained at Grossenhain with FML Beck but we do not know which ones