On June 16 1760, the French Army of the Lower Rhine, under the command of the Comte de Saint-Germain, had passed the Rhine to support the main army of the Duc de Broglie in its offensive in Western Germany. By the end of June, Broglie had already seized Marburg. On July 4, he instructed Saint-Germain to quit Dortmund and to march towards Corbach to make a junction with the French main army. On July 8, when Ferdinand of Brunswick was informed of Broglie's manoeuvres, he detached the Hereditary Prince of Brunswick with the vanguard and ordered Major-General von Luckner to occupy the heights of Sachsenhausen and Corbach. At 3:00 p.m., Ferdinand followed them with his main army. On July 9 in the morning, Ferdinand encamped near Wildungen, sending Kielmansegg on Frankenberg. The same day, the French main army passed the Eder at Frankenberg and Clausen's Brigade marched on Corbach to observe the movements of the Allies. Clausen came to contact with Luckner's Corps. Broglie ordered to immediately dislodge them and sent the Comte de Rooth with an infantry brigade and the Marquis de Poyanne with the Corps des carabiniers de Monsieur le Comte de Provence to support Clausen and to guard the defiles debouching on the plain of Corbach. However, the French could not mount an attack before nightfall. Meanwhile, part of the Army of the Lower Rhine under Saint-Germain had reached Fritzlar Abbey. Broglie ordered Saint-Germain to quicken pace. Clausen's Brigade took position in the wood to the left of Corbach and Broglie personally led 6 brigades towards Corbach to support Saint-Germain's attack.

At 2:00 a.m. on July 10, the corps of Ferdinand of Brunswick and of the Hereditary Prince resumed their march. Ferdinand sent forward a corps (6 bns and 6 sqns) under Lieutenant-General Oheimb to reinforce the Hereditady Prince before the combat.

The Hereditary Prince at the head of the vanguard of the Allied Army had made a junction with Kielmansegg's Corps. He arrived at Corbach while the Allied main army was still passing the defile of Sachsenhausen.

Believing that he was facing only Saint-Germain's Corps, the Hereditary Prince resolved to attack immediately without waiting for the main army. 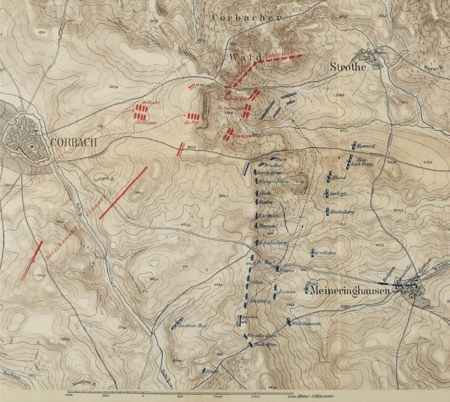 The town of Corbach is located on heights rising to some 400 meters above the surrounding plain and extending about 1,8 km east of Corbach to the woods of Berndorf.

At 10:00 a.m., M. de Clausen reported that a considerable Allied force could be seen on the heights near Corbach. Broglie went to the law court of Corbach to observe the Allied dispositions and saw them debouching from a wood.

A skirmish took place between French hussars and Allied light troops and the hussars discovered a column of Allied infantry.

As not more than 10,000 foot and 17 sqns of the French were yet deployed, the Hereditary Prince personally led the Bock and Malsburg brigades to the attack of the woods and dislodged the enemy while the French du Roi and Navarre infantry brigades appeared on the field.

Broglie was surprised by this bold action and first believed that he was facing the entire Allied Army. However, when he saw the size of the two columns following the initial attack, he ordered Saint-Germain to enter into the wood while he supported him with the Castellas and Royal-Suédois Brigades. Clausen took possession of a knoll where he planted 24 pieces.

About 2:00 p.m., the engagement became extremely hot. The Navarre Brigade, under the command of Lieutenant-Golonel de Saint-Victor distinguished itself by capturing a battery.

As these additional units came up, the Hereditary Prince was soon driven back by superior numbers. Part of his infantry retired disorderly on his cavalry deployed in line of battle. The presence of the Allied cavalry prevented the French infantry to follow up the Allied infantry.

Ferdinand who had now reached Saschsenhausen ordered the Hereditary Prince to retire and to make a junction with the main army.

Oheimb's Corps arrived on the field towards the end of the combat.

It fell to the British infantry (5th Foot, 24th Foot, 50th Foot and 51st Foot) to cover the retreat. The leftmost units fell on Navarre Infanterie. Broglie sent the newly arrived infantry brigades Auvergne and Orléans to its support. Furthermore, Prince Camille de Lorraine, galloping ahead of his cavalry corps took command of Beaufremont Dragons and Turpin Hussards and charged on retiring troops near watchtower hill. So hard were Allied units pressed that the Hereditary Prince only extricated them by putting himself at the head of two squadrons of the 1st Dragoon Guards and 3rd Dragoon Guards and leading them to a desperate charge against the French hussars and the Beaufremont Dragons. The British squadrons responded superbly (the 1st Dragoon Guards had gone into this charge with 90 men and returned with 24), and so the rear-guard was saved.

Then, 24 additional French squadrons, from the corps of Prince Camille, started to appear on the battlefield.

The Hereditary Prince had received an unpleasant reverse and the French had secured their first object, the junction of the armies of Saint-Germain and Broglie, with signal success.

N.B.: the French detachments at Corbach were under the overall command of Lieutenant-General Comte de Saint-Germain

Part of Broglie's vanguard under the Marquis de Poyanne, sent as reinforcements on July 9:

Army of the Lower Rhine under the command of Lieutenant-General Comte de Saint-Germain was still on its way. Saint-Germain, probably seconded by the Marquis d'Amenzaga, force marched with 2 brigades and some light troops to take part in the action:

N.B.: the rest of Saint-Germain's Army arrived gradually during the following days, too late to take part in the action.

N.B.: there are many contradictory accounts of the exact breakdown of Prince Camille's Cavalry Division. We tried to reconcile them as well as we could. This cavalry division arrived in the afternoon, too late to take part in the action. Nevertheless, Prince Camille put himself at the head of Beaufremont Dragons and Turpin Hussards, that were formed up forward to screen the approach of the main army.

Hotham (probably): The operations of the Allied Amy under the command of his Serene Highness Prince Ferdinand Duke of Brunswic and Luneberg beginning in the year 1757 and ending in the year 1762, London: T. Jefferies, 1764, pp. 149-151

Rogge, Christian: The French and Allied Armies in Germany during the Seven Years War, Frankfurt: 2007