The reinforced Prussians troops had fortified positions on the hills to the west of the town of Strehla, on left bank of the Elbe river. The villages on the plateau to the west of Strehla were linked by a row of hillocks. These villages were Leckwitz and Sahlassan, to the east near Strehla; Clanzschwitz and Liebschütz, to the south; Klötitz and Laas, to the north; and Wellerswalde to the west. A forest stretched between the villages of Laas he and Clanzschwitz. A small river ran between this forest and the main Prussian positions just west of Strehla. A second range of high hills extended to the south of the road leading from Strehla to Zausswitz and Wellerswalde. 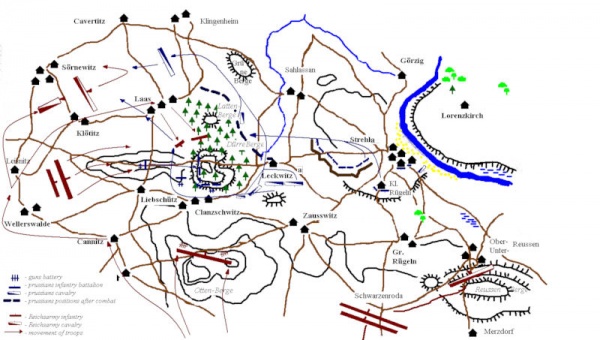 Prussian positions at the beginning of the combat

By 3:00 AM on August 20 1760, lieutenant-general von Hülsen had already deployed most of his units in field fortifications on the plateau immediately to the west of Strehla. However, Wunsch Frei-Infanterie and 2 coys of Hauss battalion occupied Strehla and 3 sqns of Kleist Hussars were positioned near its suburbs. Furthermore, Grenadier Battalion 2/G-II Nesse along with 2 coys of Jäger zu Fuss occupied the village of Klein Rügeln.

The field fortifications on the plateau were occupied by:

The gap between the villages of Leckwitz and Klein Rügeln was covered by Schorlemmer Dragoons along with Kleist Hussars and the Freidragoner.

Positions of the Reichsarme and plan of attack

The Reichsarmee was subdivided into several corps. Their cooperation was vital for the success of this encounter. The commander-in-chief the Reichsmarschall prince von Zweibrücken-Birkenfeld planned to execute the attack on the Prussian right wing with the help of the Reserve of prince Stolberg, supported by the Grenadier corps of Guasco and by Kleefeld's Austrian auxiliary corps. Meanwhile, the main corps under Zweibrücken would simulate a frontal attack on the fortified camp near Strehla and colonel Zettwitz would skirmish on the Prussian left flank.

Once this manoeuvre accomplished, Kleefeld would then execute a wide outflanking movement towards the village Laas in order to attack the Prussian right wing deployed on the Dürre-Berg from the rear. Meanwhile the infantry (7 bns) of Stolberg's Reserve under major-general Würzburg would attack between Laas and Liebschütz while Luzan Infantry with two 6-pdr guns would cover this operation from the Sand-Berge.

The cavalry units of Guasco's and Stolberg's corps were instructed to support the Reserve during its attack.

Major-general von Braun, who commanded the Prussian right wing, noticed movements in the neighbourhood of the Otten-Berg and placed Grenadier Battalion 7/30 Lubath with two 12-pdr guns on the Liebschützerberg to threaten the Austro-Imperial outflanking manoeuvre. When Hülsen discovered enemy's intentions, he realised that the real threat would come from his right wing. Accordingly, he ordered the units occupying Strehla to reinforce Braun's corps, Grenadier Battalion 7/30 Lubath taking position on the height of the windmill of Leisnitz.

Meanwhile, the Austrian corps of Guasco and Kleefeld had continued their outflanking movement. Braun reacted by advancing Grenadier Battalion 38/43 Burgsdorff with two heavy 12-pdr guns opposite the Otten-Berg. He also planted a battery of four 12-pdr guns on the Dürre Berg while Braunschweig-Bevern Infantry with a 5 guns battery took position at the foot of the hill.

Hülsen had no plan for the incoming combat and had resolved to fight a defensive battle.

At about 5:00 AM, general Guasco's artillery opened on Grenadier Battalion 7/30 Lubath which was unexpectedly threatening the Austro-Imperial outflanking movement against the Prussian right wing. Indeed, its position on the Liebschützerberg extended the Prussian line of defence and delayed the Austrian attack. This artillery duel remained inconclusive since it had been engaged at a distance of more than 3,000 paces. Nevertheless, it successfully covered the advance of Guasco's and Stolberg's corps to new positions further west.

Before the assault, prince Stolberg had formed his line of battle in front of Wellerswalde, opposite the Liebschützerberg, while Kleefeld occupied the village of Laas.

About 6:00 AM, the Austro-Imperials launched their assault. Major Lubath, seeing that his battalion would face a frontal attack as well as a threat against its right flank, withdrew into the forest where it formed a new defensive line with Grenadier Battalion 11/14 Beyer and Grenadier Battalion G-I/G-XI Lossow.

During this time, the grenadiers of Guasco's corps were advancing on the Dürre-Berg. To impede their advance, Braun sent the Grenadier Battalion 38/43 Burgsdorff to the Stilleberg from where it opened a lively fire against the Austro-Imperial grenadiers with two heavy12-pdrs and its battalion guns (probably 6-pdrs). Guasco considered that he could not move further without risking heavy loss and stopped, ordering his own artillery to open against the Prussian positions on the Stilleberg.

Meanwhile, the main corps of the Austro-Imperial army under the command of Zweibrücken had passed the Delnitzbach and deployed in two lines with the cavalry and grenzer troops, occupying its assigned positions behind the villages of Schwarzenroda and Ober-Reussen where it remained idle, out of range of the Prussian artillery, in front of the weak Prussian corps defending the plateau of Strehla.

Lieutenant-general Hülsen took advantage of Zweibrücken inactivity to send Braunschweig-Bevern Infantry to reinforce Braun's positions on the the Dürre-Berge. Hülsen also ordered the Grenadier Battalion 2/G-II Nesse and one battalion of Markgraf Carl Infantry to form at the foot of the Dürre-Berg.

Despite the lively musketry fire, the Kleefeld's Austro-Imperial troops had extended their linen to the right and gone beyond Laas. They then marched against the Prussian right wing advanced rapidly to contact and engaged the Prussian battalions deployed in the forest.

The sound of musketry and cannon shots in the rear of the Prussian positions induced major Marschall von Biberstein, who was commanding the II./Schorlemmer Dragoons, to come to the help of the surrounded Prussian units. His dragoons moved in full trot over the hills and across the forest in direction of the Dürre-Berg. They then unexpectedly fell on the left flank of the unsupported attacking Austro-Imperial infantry. During this charge, they trampled the Austro-Imperial grenadier battalions (8 coys) along with Nikolaus Esterházy Infantry. Braun, seeing the unexpected turn events were taking, attacked the fleeing enemy infantry at the point of the bayonets. With the help of the Prussian dragoons, he dispersed the rest of the approaching Austro-Imperial infantry.

Meanwhile, colonel Kleist, who was stationed behind the Latte Berg with 4 hussar sqns, advanced towards Laas with some dragoons arriving from Leckwitz. He led 14 sqns: 3 sqns of I./Schorlemmer Dragoons (the 2 remaining sqns had been left behind at Lecwkitz), 7 sqns of Kleist Hussars and 4 sqns of Kleist Freidragoner. He deployed his cavalry between the villages of Kligenheim and Laas. While doing so, Kleist spotted Kleefeld's Austro-Imperial cavalry deploying between Sörnewitz and Klötitz to attack the rear of the Prussian right wing. Kleist immediately charged the Baranyay Hussars frontally while major Marschall attacked the left flank of Zweibrücken-Birkenfeld Chevaulégers.

The Austro-Imperial cavalry was surprised by this unexpected attack. The Kreisregiment Hohenzollern Cuirassiers (4 sqns) and the Kurfürstin Leib-Dragoner (5 sqns) were sent to their help but they arrived too late. Disorganised by their fleeing comrades, they were forced to retreat. The Prussian cavalry did not pursue them but rather rallied on the spot.

Around 7:00 AM, the combat was finished.

During the combat, Stolberg and Guasco did not try to support Kleefeld's corp. Stupefied by his defeat, they did not resume attack. However, if any of the commanders of the Austro-Imperial army had decided to advanced in the 400 meters gap between the Prussian position on the Dürre-Berg and the field fortification on the plateau of Strehla, victory would have been theirs. Indeed, most of their infantry had not yet been engaged.

Now that the first attempt of the Austro-Imperials had been repulsed, Hülsen reorganised his lines. Braunschweig-Bevern Infantry and Grenadier Battalion 38/43 Burgsdorff (whose commanders had been killed in action) took position on the Dürre Berg in a thin formation, 2 men deep. Salmuth Fusiliers and Grant Fusiliers adopted a similar formation in the field fortifications near Strehla while I./Markgraf Carl Infantry formed only 1 man deep. This new deployment gave the impression of a much more numerous corps defending the Prussian field fortifications. Furthermore Alt-Scheckendorf Infantry occupied the village of Leckwitz. Finally, the Grenadier Battalion 2/G-II Nesse, the II./Markgraf Carl Infantry and the Jäger zu Fuss took position on the left wing.

The unsuccessful attack of the Austro-Imperial army cost 39 officers and 1,178 soldiers made prisoners, 1 gun captured and 3 flags captured by Schorlemmer Dragoons. All losses including dead and wounded were surely above 1,800 men (the work of the Prussian Generalstab gives over 2,000 men).

Prussian troops stayed on their positions till 1:00 PM. However, the Austro-Imperial army did not show any intent to resume the attack. Stolberg's and Guasco's corps deployed in the neighbourhood of the village of Schöna with the main army behind them.

After noon, lieutenant-general Hülsen decided to withdraw towards Torgau in two columns. The first column marched by Schirmenitz, Staritz and Belgern; the second by Aussig, Staritz and Belgern. The Prussian cavalry covered the left flank of the marching columns. The rearguard was under the command of colonel Kleist and consisted of Salmuth Fusiliers, II./Markgraf Carl, Wunsch Frei-Infanterie and several hussar squadrons. The Austro-Imperials did not not pursue Hülsen, sending only hussars under the command of colonel Zettwitz to harass the Prussian rearguard.

During the evening, Hülsen's entire force arrived at Torgau where they encamped with the Rathsweinberge on their right. Infantry took quarters in the city while Schorlemmer Dragoons formed the right and left wing. Kleist Hussars and Kleist Freidragoner encamped in front of Torgau in the villages of Zinna, Süptitz and Welsau. Wunsch Frei-Infanterie and 5 squadrons of Kleist Hussars were deployed near the village of Loßwig while II./Grant Fusiliers and Hauss Saxons occupied the village.

After Hülsen's departure, the Austro-Imperial army advanced from Schöna and occupied the former Prussian camp at Strehla. Stolberg took position on the hills near Wellerswalde and Kleefeld advanced up to the neighbourhood Neußen near the road to Belgern. Finally, colonel Zettwitz crossed the Elbe river with his command and reached Kreinitz opposite Strehla.