In August, taking advantage of Frederick's departure for Silesia with his army, the Duke of Zweibrücken, who commanded the Reichsarmee in Saxony, formed the design to attack the isolated and feeble corps (17 bns, 25 sqns) left in Saxony under the command of Lieutenant-General von Hülsen. On August 20, Hülsen managed to stop the Austro-Imperials at the Combat of Strehla in the Schlettau-Meissen Country. However, being outnumbered, Hülsen then retired towards Torgau. Operations then came to a standstill until September 21 and the Württemberger Contingent reinforced the Austro-Imperial army.

At the end of September, Hülsen was forced to abandon Torgau, which was soon occupied by the Austro-Imperials. Hülsen took a new position near Wittenberg. On October 1, the Prince of Zweibrücken escorted by a few sqns, reconnoitred Hülsen's positions in preparation for an attack. However, he was soon driven back by Colonel von Kleist, who had advanced against him with several sqns and 2 bns.

On October 2, the Austro-Imperial army advanced on Hülsen's positions near Wittenberg. 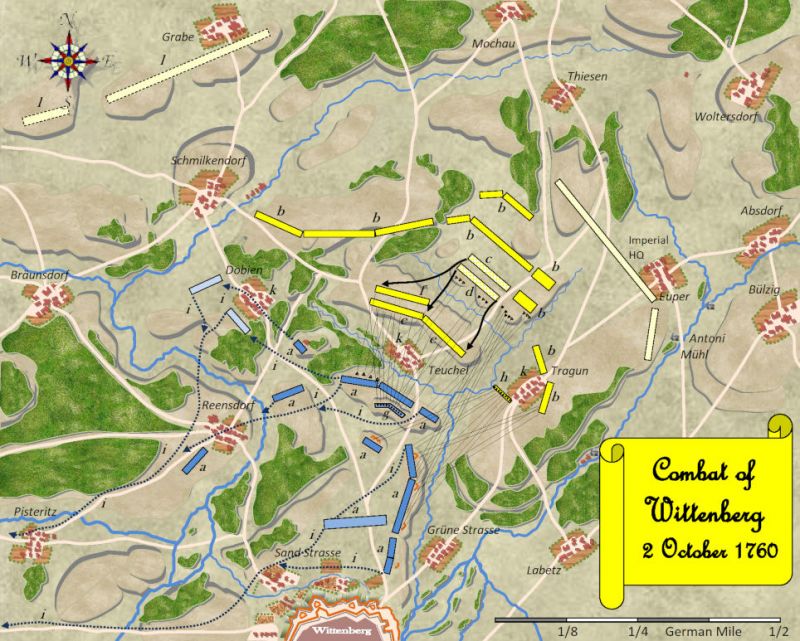 Map of the combat of Wittenberg, fought on October 2, 1760
Copyright: Dinos Antoniadis
Key to the map:

a Camp of Hülsen's Corps
b Austro-Imperial camp behind Teuchel.
c Austrian Grenadier Corps.
d Luszinsky's Austrian Corps.
e Advance of Luszinsky's Corps against the Prussian left flank.
f Advance of the Grenadier Corps to support Luszinsky.
g Prussian Grand Battery keeping a vivid fire against the advancing corps.
h Austro-Imperial battery keeping a lively fire against the Prussian left flank.
i Retreat of Hülsen's Corps on Dobien and Coswig, where it had a tough skirmish with the pursuing corps.
k Villages partly burned during this engagement.
l Positions of the Austro-Imperial army after the action, during the siege of Wittenberg.

N.B.: the engagement is also known as the "Combat of Dobien."

Early in the morning on October 2, the Austro-Imperial set out in two columns from its camp near Elster. Luszinsky's Corps formed the vanguard, and Kleefeld's Corps covered the right flank of the columns.

Around 9:00 a.m., the main body of the Austro-Imperial army reached the heights of Euper.

Luszinsky's cavalry pushed back the Prussian outposts established at Labetz and Trajuhn. It was then confronted by the light cavalry of Colonel von Kleist, the Schorlemmer Dragoons and 2 bns, and Luszinsky decided to retire on the main body.

After a few cannon shots, Kleist also retired towards Hulsen's small army. To secure Hulsen's left flank, he took up position with his light cavalry and the II.Schorlemmer Dragoons on the heights between Teuchel and Dobien.

Zweibrücken now let the Grenadier Corps, which was following the cavalry, advance against the left wing of the Prussians at Teuchel, while the artillery of the main body, which had been planted on the heights of Trajuhn fired on Hulsen's positions.

After an artillery preparation, Luzinsky's Corps and the Grenadier Corps attacked the Prussian left, while the main body of the Austro-Imperial army remained idle behind its artillery on the heights of Trajuhn.

Lieutenant-General von Hülsen had been closely watching the enemy's movements. As soon as he saw that they were advancing against his left wing, he decided to transfer some bns (Grenadier Battalion Nesse, II./Markgraf Carl Infantry, Grant Fusiliers and I./Salmuth Fusiliers) to the heights north of Teuchel from his right wing, which was not threatened and was also protected by the Fortress of Wittenberg.

The Grenadier Corps would now meet with considerable resistance if it decided to advance.

The Duke of Württemberg, who was posted with his contingent south of Wittenberg near Pratau on the opposite bank of the Elbe, had not been informed of the plan of the Prince of Zweibrücken and had therefore not been prepared for combat. To make things even more difficult for him, he did not have pontoons, so he had to rely on the fords of the Elbe for his operations against the flank and rear of the Prussians. However, the thunder of cannons north of Wittenberg had taught him that a serious battle was taking place there.

Around noon, the Württemberger Contingent along with Zedtwitz's troops marched from Pratau in the direction of the small wood west of Piesteritz, which seemed to be occupied. The Württemberger artillery opened against this wood.

Around 2:00 p.m., the Duke of Württemberg ordered the Gorcy Hussars and 2 sqns of the Leib-Grenadiers à Cheval to ford the Elbe and to attack Hülsen's Army in the rear. Some of Zedtwitz's Grenzer light troops covered the crossing of the Elbe by the Württemberger cavalry units.

Around 5:00 p.m., since no further progress was to be expected in these quarters, Zweibrücken recalled the Grenadier Corps.

But now another danger remained on the left flank, for meanwhile Luszinsky's Corps had advanced in a wide arc to the right in order to attack the Prussians in the rear by way of Dobien. However, Luszinsky's manoeuvre was spotted and the Grenadier Battalion Lubath hurried there and occupied old entrenchments on the hill just east of Dobien. These grenadiers were soon followed by the Grenadier Battalion Heilsberg and the I./Salmuth Fusiliers and the 400 recruits of Hauss Fusiliers previously posted near Teuchel with 5 heavy guns. These reinforcements took position on the ridge between Reinsdorf and Dobien.

Luszinsky's Grenzer light troops then attacked the entrenchment on the hill near Dobien. Part of the Grenzers managed to enter Dobien and could only be expelled with great difficulty. The village went up in flames. Luszinsky's attacks against the entrenchments also failed.

Darkness finally put an end to the bitter struggle. Again, the bulk of the Austro-Imperial army had not intervened. It had marched to Schmilkendorf where it encamped during the evening, on the flank of Hülsen's small army.

Hülsen realised that he could easily be surrounded if he did not retreat swiftly. Late in the evening, he sent his baggage towards Coswig, escorted by 2 bns (I./Bevern Infantry, I./Salmuth Fusiliers) and soon followed with his small army.

The Austro-Imperials marched to Mochau, blocking the direct road to Berlin by Treuenbrietzen. Without any Prussian Army to defend them, Torgau was taken and Wittenberg besieged.

N.B.: the 2 bns of Nikolaus Esterházy Infantry which had suffered heavy losses at Strehla had been sent to garrison Meissen, where it had replaced 1 bn of Kurtrier Infantry