1760 - British expedition against the Cherokee Indians

The campaign lasted from March to August 1760

At the outbreak of war in North America in 1754, Cherokee Indians were allies of the British. However, French agents from Fort Toulouse (near present-day Wetumpka, Alabama) gradually gained support with some Cherokee chiefs.

In 1758, a Cherokee warband under Kanagatucko took part in the second British expedition against Fort Duquesne (present-day Pittsburgh) and in raids against the Shawnees of the Ohio Country. The same year, a Cherokee warband under Moytoy (Amo-adawehi) of Citico accompanied Virginian troops on a campaign against the Shawnee of the Ohio Country. During the expedition, the Cherokee Indians and Virginians fell to fighting each other, and the Virginians killed and scalped about 20 of them. Moytoy retaliated.

By 1759, a pro-French Cherokee party was established at Great Tellico (present-day Tellico Plains, Tennessee) and Chatuga. Nevertheless. moderate Cherokee chiefs came to negotiate with the governor of South Carolina but were kept as hostages and brought to Fort Prince George near Keowee. 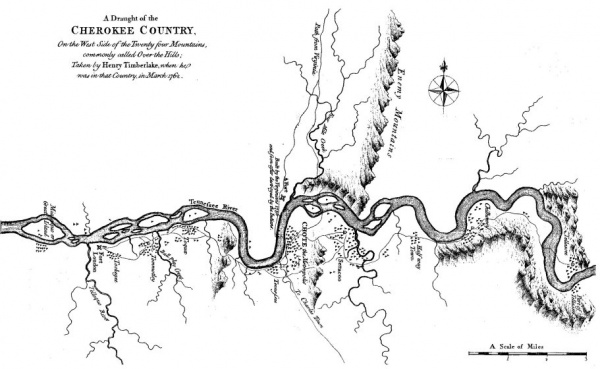 In February 1760, a Cherokee war-party attacked Fort Prince George to free the hostages. The British executed all hostages and repulsed the assault.

On February 2 and 3, a Cherokee warband (40 men) of the village of Estatoe launched an unsuccessful attack on Fort Ninety Six in Carolina which was defended by the Upper Saluda Militia (33 men and 12 slaves) under Captain James Francis. The militia lost 2 men wounded and the warband 2 men killed and 2 taken prisoners.

The war-party finally captured some small posts. The pro-French Cherokee Indians were led by Aganstata of Chota, Attakullakulla (Atagulgalu) of Tanasi, Ostenaco of Tomotley, Wauhatchie (Wayatsi) of the Lower Towns, and Round O of the Middle Towns.

On March 3 and 4, a much stronger warband (250 men from the Lower Towns, the Middle Towns and the village of Estatoe) made another attempt on Fort Ninety Six defended by 25 men of the Upper Saluda Militia under Captain James Francis and 12 men of the Amelia Militia under Major John Lloyd. The attack failed once more and the Cherokee Indians lost 6 men killed.

Governor Lyttleton of South Carolina then appealed to General Lord Jeffrey Amherst for support. The latter was preparing his advance into Canada along the Saint-Laurent River. However, Amherst entrusted the command of an expedition against the Cherokee Indians to Colonel Montgomery. His force consisted of 400 men of the 1st Royal Regiment of Foot, 700 men of the 77th Montgomery's Highlanders.

Upon their arrival in Carolina, the regulars were soon joined by 300 mounted Carolina rangers, 100 militia, and a party of 40 to 50 Catawba warriors. Starting from Charlestown, Carolina, Montgomery then marched up 240 km to Fort Ninety Six, so called because it was supposed to be 96 miles (154 km) from the township of Keowee.

From Fort Ninety Six, Montgomery pushed forward for 4 days through dense forest and mountainous country without finding any sign of Indians. Concluding therefore that the Cherokees were unaware of his advance, he left all tents and baggage behind and made a forced march to surprise the Indians before they could escape. However, the main body of the Indians retired to the Middle Towns before Montgomery could reach them. He could accomplish no more than the destruction of crops and of the Cherokee Lower Towns, including Keowee, Estatoe and Sugar Town, killing or capturing around 100 Indians.

Montgomery then relieved Fort Prince George. The ensuing negotiations with the Cherokee failed. It was then resolved to begin the work anew and to make a fresh advance into the forest towards the Middle Towns. Wagons were left behind.

On June 27, at some 8 km from Etchoe, the lowest settlement of the Cherokee Middle Towns, a company of rangers forming Montgomery's advanced guard was ambushed in a deep valley. The Indians burst upon the rangers suddenly, as they had upon Braddock, with hideous whooping and howling, and a scattered but deadly fire of rifles. Captain Morrison, and a number of his rangers were killed and the rest ran off. The grenadiers and light infantry companies moved forward to support the rangers while the 1st Royal Regiment of Foot came forward on rising ground to the right of the Cherokee. The 1st Royal Regiment of Foot was thrown back into open ground by heavy rifle fire and it took some time to reform and fight off the Cherokee counter-attack. Montgomery now extended his line on the left with the 77th Montgomery's Highlanders, who turned the Indian right. The Indians retired from this advance and came into contact with the 1st Royal Regiment of Foot in a brisk encounter from which they retreated to a position on a hill from which they could not be dislodged. Montgomery ordered an advance through the pass and on to the town, but some of the Cherokee ran to warn the inhabitants to leave. Some of the warriors had got around his flanks and attacked his pack animals and supply train whose loss would cripple the army. This attack was eventually driven off. This engagement cost the British over 80 men killed and wounded.

After the battle, Montgomery found himself with a large number of seriously wounded men which he could neither leave behind if he advanced or retreated. He also lost many of his pack animals so that it was impossible to proceed any farther. He had to abandon the advance along with a large quantity of supplies in order to provide pack horses to transport the wounded to safety. The British force retreated back to Fort Prince George.

Montgomery turned over supplies to the fort and left his most badly wounded. He then continued his withdrawal to Charleston. While his expedition was partially successful in destroying the Cherokee Lower Towns and relieving Fort Prince George, Montgomery had been halted and forced to withdraw at the Middle Towns and had failed to relieve Fort Loudoun (in present-day Monroe County, Tennessee).

By August, Montgomery and his men sailed back to New York.

On August 7, the garrison of Fort Loudoun was forced to surrender. Captain Demeré and the garrison were allowed to retain their arms and enough ammunition to make the trip back to the colony provided they left the remaining arms and stores of ammunition to the Cherokee led by Ostenaco.

On August 9, the garrison marched out of Fort Loudoun with a Cherokee escort. The Indians entered the fort and found 10 bags of powder and ball buried and the cannon and small arms thrown in the river to keep them from the Cherokee. The Indians, angered by the broken agreement, went after the garrison.

On the morning of August 10, the escort had drifted off and the garrison was attacked in the woods by perhaps 700 Indians. Some 22 soldiers and 3 civilians were killed and 120 taken prisoners. Panic and consternation reigned in Charleston at the news. A truce of six months was agreed to, during which peace attempts failed.