The campaign took place from April to July 1760

Early in the spring of 1760, a British squadron, under the command of Commodore John Byron, convoyed workers from Great Britain to demolish the fortifications at Louisbourg. This squadron consisted of :

Urged upon by the Marquis de Vaudreuil, the French Court sent tardy and weak succour to the Chevalier de Lévis, who planned an attack on Québec, hoping to recapture the town.

On April 10, a small French flotilla, placed under the command of François Chenard de La Giraudais, sailed from Bordeaux to reinforce Canada. It consisted of:

N.B.: some sources include another French frigate, the Espérance (30) but it seems dubious that this vessels was present.

On April 12, two ships of the French flotilla (the Aurore and the Soleil) were captured by the British fleet of Admiral Edward Boscawen who blockaded the French ports.

Around April 24, another French merchantman (the Fidélité) ran aground in the Azores.

On May 15, La Giraudais' 3 remaining ships rendezvoused in the Saint-Laurent Gulf where they learned that a British fleet was already sailing towards Québec and that the river was well defended by other British squadrons.

On May 16, off the Gaspé Peninsula, the small French flotilla captured 4 British merchantmen.

On May 17, off the Gaspé Peninsula, the small French flotilla captured 2 additional British merchantmen. One of the merchantman captured had a French pilot on board who informed La Giraudais that Lord Colville had sailed into the Saint-Laurent some time before. La Giraudais then decided to alter his course, seeking a safe harbour.

On May 18, La Giraudais took refuge in Baie des Chaleurs with his squadron. He immediately sent a courier to Montréal asking Vaudreuil for instructions.

On May 24, Byron's Squadron arrived at Louisbourg. He could now dispute the entry of the Saint-Laurent to any French reinforcements.

The Mi'kmaq chiefs of Richibucto and Miramichi informed Brigadier-General Whitmore at Louisbourg that French ships had taken shelter in Baie des Chaleurs. Whitmore transmitted this intelligence to Commodore Byron.

On June 19, Byron interrupted work at Louisbourg and, proceeding on his own responsibility, sailed to discover this convoy. On his way, he sighted the French vessel Catherine (probably a merchantmen) in the Baie de Gaspé and destroyed her. He destroyed another French vessel at Saint-Simon near Caraquet.

On June 22, Byron reached Baie des Chaleurs where he effectively located the French force. La Giraudais then ascended the Restigouche River to get out of reach of the British ship of the lines. By now, he had taken 19 British prizes. He then turned the Machault (32) broadside, scuttled some schooners as a barrier and established a battery of cannon ashore to strengthen his position. D'Angeac with 200 men immediately planted a battery at Pointe-à-la-Garde. Thus these 2 batteries erected on the north shore of the river protected the approach to the French positions. Restigouche itself was garrisoned by 250 men of the Compagnies Franches de la Marine, 700 Acadians and 700 Mi'kmaq.

On June 25, the Fame (74) ran aground while trying to find a channel but was soon afloat.

On June 27, Byron with the Fame (74), Scarborough (22) and Repulse (32) sailed with great difficulties into the mouth of the Restigouche River.

On June 28, the Fame (74) silenced a French battery which was stopping her advance.

On July 3, Byron finally found a channel allowing his ships to sail upriver and to confront the French defensive line. This forced La Giraudais to sail further upstream with his 3 remaining ships and his prizes.

For the next several days the two forces engaged in a running battle. The French had made preparations to meet the enemy; several cannon had been placed on Battery Point. Lower down at Pointe à la Garde, from whence the eye reaches as far as the entry of the Restigouche, there was a detachment of soldiers who were charged with keeping guard over the course of the river and give notice of the advance of the British squadron. 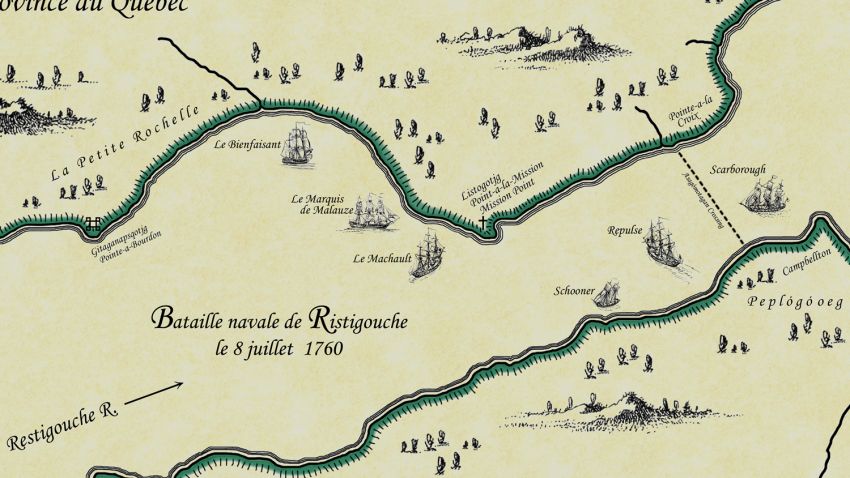 Engagement of the Restigouche July 8, 1761 – Map specifically made for the 250th Anniversary of the battle in July 2010 and published here with the kind authorisation of Wendy Cosper and Charles Borris

On July 8, the wind being fair, Byron disembarked part of his Marines below the French post at Pointe à la Garde to follow his advance from the shore, guided by a native of the region, and to ultimately attack Petite-Rochelle in the rear. Byron's ships then ascended the stream without hindrance, until they reached Battery Point on the north shore, where they experienced a brisk fire from the guns. Byron finding it impossible to get up with any of the line of battle ships, sent some of his best men on board the frigates, and officers from his own and the rest of the ships, and manned a schooner of 4 6-pdrs with 100 men. The boats were manned and, in defiance to all the fire from the batteries and ships, the vessels warped up and the boats sounded under the very batteries. The Bienfaisant (22) and the Marquis de Malauze (18) were disabled and the guns of the battery silenced. The two disabled ships were compelled to withdraw towards the Indian village whilst the British pushed forward to Pointe-à-Martin (present-day Campbellton) on the south side where they suffered much from the fire of some guns placed flush with the water. However, their superior artillery riddled the French ships. The Machault (32) struck at 11:00 a.m. At noon, La Giraudais blew up the Machault (32) and scuttled the Bienfaisant (22) to prevent them from falling into the hands of the British. He did not scuttle the Marquis de Malauze (18) because she was transporting 67 British prisoners (60 men and 7 women). All other sloops and schooners were sunk, burned or captured. The British prisoners were abandoned aboard the Marquis de Malauze (18) but soon Marines from the Repulse (32) under Captain Wood came to their assistance.

During this engagement, the British lost 12 killed and 12 wounded; the French 30 killed and wounded.

A few small vessels managed to escape but were later captured by another British squadron under Captain Wallis sent by Lord Colville to attack the French flotilla who had taken refuge in Baie des Chaleurs. Wallis' Squadron consisted of:

The destruction of the French flotilla having left Commodore Byron master of the field, he gave orders that the 200 houses of the Acadian refugees village of Petite-Rochelle should be razed. This village was built on Pointe-à-Bourdon (present-day Broadlands), 6 km higher than the village of Restigouche, on the north shore of the Restigouche River. Byron also ordered the destruction of Restigouche and the neighbouring batteries. During the engagement the French, under d'Angeac, and the Mi'kmaq had retreated to the woods, where they awaited in safety the departure of the British squadron.

The Repulse (32), being much damaged was sent to Halifax to refit while Byron returned to Louisbourg with the rest of his squadron to complete the razing of the fortifications of Louisbourg.

On October 20, Vaudreuil's envoy, Louis François Gédéon de Catalogne, arrived at d'Angeac's camp and informed him of the capitulation of Montréal.

On October 30, d'Angeac and his force surrendered. It consisted of:

The soldiers were transported to La Rochelle in France under condition that they would not serve any more during the present war.

This article also contains texts from:

Cooney, Robert: A compendious history of the northern part of the province of New Brunswick, 1832

Wynne, John Huddlestone: A general history of the British Empire in America, 1770