The Fortress of Cosel (present-day Kędzierzyn-Koźle), one of the medium sized fortresses in Silesia, occupied an important position on the left bank of the Oder where the smaller Klodnitz River (present-day Kłodnica) flowed into it.

In March 1760, General Goltz sent an additional battalion of the Garrison Regiment V Jung Sydow to Cosel as reinforcement. He had taken this precaution because of Loudon's arrival in Silesia.

In July, Frederick II, ordered to execute all deserters without trial.

In the Fall, Loudon appeared in front of Cosel. He held a council of war where it was decided to lay siege to the fortress.

At this time, Christoph Fredrich von Lattorf was the commander of the fortress of Cosel which was defended by some 50 guns and 5 battalions (see detailed order of battle below). 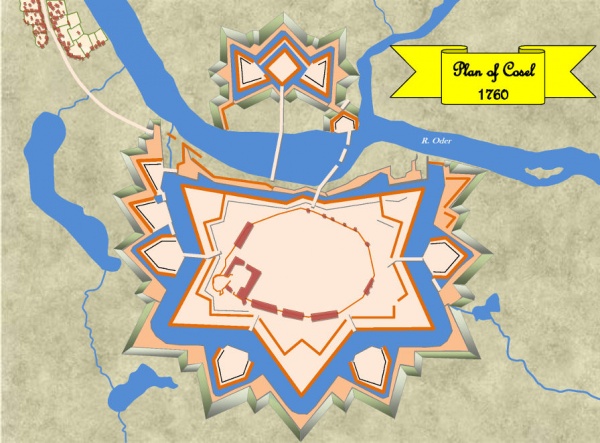 Map of the Fortress of Cosel
Courtesy: Dinos Antoniadis

From October 7, heavy rain delayed the beginning of the siege.

On October 20, Loudon (20,000 men) marched in 2 columns from Oberglogau (present-day Głogówek) and surrounded Cosel. His army encamped on the hills between Reinschdorf (present-day Reńska Wieś), Wiegschütz (present-day Większyce) and Komorno on the left bank of the Oder. Loudon established his headquarters at Kranowitz (present-day Krzanowice) and sent Colonel Faber with a detachment (Loudon's Grenadiers, 100 husssars) to Zülz (present-day Biała) to escort the heavy siege guns arriving from Olmütz (present-day Olomouc/CZ). However, due to long heavy rain, the surrounding of Cosel was not suitable for the deployment of heavy guns. Therefore, these guns remained at Klein Nimsdorf.

On October 23 and 24, the Austrians started to dig the first parallel and to erect earthwork to set up batteries for the siege artillery. They made 30,000 fascines.

In the evening of October 24, FZM Ferdinand Filip Count von Harsch arrived at Cosel. He had been sent by the Hofkriegsrat (War Council) in Vienna to support Loudon.

On October 25, additional Austrian Corps arrived under Joseph Count von Bethlen to reinforce Loudon. In the evening, Loudon launched an assault from the left bank of the Oder against the isolated redoubts of Kobelwitz, Rogau and Wiegschütz. The Prussian Major Johann Leopold von Arnswald distinguished himself during this combat. Finally, at 9:30 PM, the fire of the Prussian artillery forced the Austrians to retreat. Loudon also tried another of his trick, sending catholic soldiers to Cosel to convince the garrison to surrender. Loudon promised pardon to all soldiers who would surrender. According to Lattorf's letter to the king, not a single soldier decided to abandon his post.

The same day (October 25), a Prussian relief force (22 bns, 36 sqns) under General von Goltz reached Glogau (present-day Głogów). Loudon was surprised to learn that such an important force was on its way to relieve Cosel. He was now impatient to capture the fortress before Goltz's arrival because he did not want to meet this Prussian force on the field. However, heavy rain made it almost impossible to make regular siege with parallels and trenches. Furthermore the Austrian siege artillery had insufficient ammunition.

On October 26, during a reconnaissance, Loudon came to the conclusion that it would take 5 to 6 days to remove the heavy guns from the trenches, if a retreat should become (the Prussian Major-General Goltz was only 7 to 8 day's march form Cosel). Accordingly Loudon decided to raise the siege.

On the night of October 26 to 27, Loudon, after a preparatory bombardment with howitzers placed behind the dam of the Oder, launched a last general attack to storm the fortress, destroying some magazines and damaging the palisade and main wall. Grenzers, supported by grenadiers, tried to penetrate into the fortress but were repulsed. After this assault, the defenders repaired the most serious damages. During this combat, the Prussian Major Sebastian Friedrich von Braxein distinguished himself. Loudon then sent a messenger to summon the garrison but he received a negative answer.

On October 27, Loudon sent back the siege park.

On October 28, the Austrian main forces crossed the Oder River and withdrew.

On October 29, the Austrian main forces marched to Oberglogau. The heavy artillery was sent to Littau (present-day Litovel/Moravia).

On October 30, the rest of the Austrian units retreated, burning all fascines before leaving.

On November 1, a small detachment under Colonel Hieronymus Baron Ljubibratich von Trebinija (2 bns of Slavonisch-Gradiskaner Grenzer, 100 hussars), which had been previously sent to Urbanowitz (present-day Urbanowice) to reconnoitre the region around this stronghold, was attacked by part of Lattorf's troops, who made a sortie and forced the detachment to retreat to Ratibor (present-day Racibórz) due Loudon's retreat from Cosel.

Lattorf admitted that he had lost no more than 7 men wounded during the siege. Other sources mentions only 2 dead and wounded overall. Austrians losses are unknown.

On November 2, Loudon proceeded to Neustadt in Upper Silesia with his corps. Bethlen, who had remained until then at Zülz, was replaced by Jaquemin and moved into position between Loudon and Wolfersdorf near Weidenau.

In 1758, the fortress of Cosel was garrisoned as follows: