At the beginning of July, Frederick II had tried to march from Saxony to relieve Silesia. However, Field-Marshal Count Daun had thwarted his plan by moving to Görlitz, thus blocking his line of advance. However, Daun's manoeuvre had left the Reichsarmee and the small Austrian corps under the command of Field-Marshal Count Lacy isolated.

On July 8, Frederick turned his attention on Lacy's Corps and vainly tried to engage it. Lacy retired precipitously on Dresden.

On July 10, Frederick resolved to besiege the City of Dresden, judging that the main Austrian army would not have enough time to march back to relieve Dresden before he had captured the city. 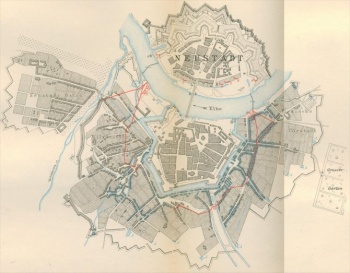 The walls of the "Altstadt" of Dresden had only a small wet ditch and no covert way. The ruined suburbs made their approach easier. The "Neustadt" had only earthworks.

Frederick estimated that Daun could not reach Dresden before four or five days, and he was already considering his next move after the capture of Dresden. He planned to enter Bohemia by way of Zittau to cut the Austrians from their magazines, thus forcing them to retire from Silesia.

However, the siege had been improvised and Frederick's Army had no heavy guns nor sufficient ammunition.

On July 11, using a bridge of barges established near Meissen, Hülsen sent 48 pontoons escorted by Grenadier Battalion Lossau to Weinböhla.

In the night of July 14 to 15, the Prussian under the supervision of Colonel von Dieskau began to work on a battery. By daybreak, they had completed a "ricochet battery" of 8 guns and 2 howitzers in front of the Moschinsky Garden of the Altstadt.

During the night of July 15 to 16, the first parallel was established in front of the “Neustadt” on the right bank of the Elbe. A battery of 10 guns was erected on the right bank of the Elbe in front of the northwestern walls of the Neustadt. It fired at the Neustadt and at the bridge over the Elbe without much results. Fires broke out in some places in Dresden, but were extinguished with little effort.

In the next days, a breaching-battery was established on the counterscarp to fire against the Jupiter Bastion located at the southern corner of the Altstadt. A battery was also erected in front of the southeastern Pirna Gate.

Heavy artillery and ammunition finally arrived from Torgau, being transported on the Elbe.

On July 16, Maquire sent Colonel von Zedtwitz with Grenzer light troops and Major-General von Würzburg with 5 grenadier coys and 3 bns to attack Holstein's positions from the Neustadt, but the assault was repulsed by the Prussian artillery.

By July 18, all Prussian batteries were ready. 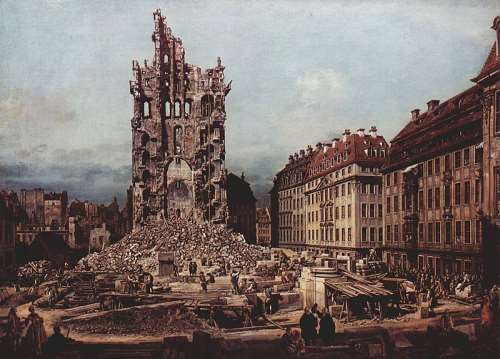 The Ruins of the old Kreuzkirche in Dresden after the siege of 1760 - Source: Bernardo Bellotto, 1765 retrieved from Commons Wikimedia

In the night of July 19 to 20, Holstein's Corps crossed to the left bank of the Elbe. He then broke down his bridge at Übigau.

The shelling of Dresden continued for the next few days.

On July 25, realising that he had no chance to obtain the surrender of Dresden, Frederick decided to recross the Elbe.

The news from Silesia were not good: the Austrians besieging Glatz (present-day Kłodzko/PL) had received heavy artillery pieces from Königgrätz; Loudon had reinforced the siege corps and stood in an entrenched camp between Parchwitz (present-day Prochowice/PL) and Liegnitz (present-day Legnica/PL). Frederick decided to march to the relief of Silesia. Hülsen would remain in Saxony and re-occupy his former camp near Schletta.