On June 6, Loudon surrounded the Fortress of Glatz with a chain of outposts.

On June 14, 1760, FML Jahnus von Eberstädt wrote to FZM Loudon about his discussions with the wife of the Prussian General d'O, commander of the Fortress of Glatz (present-day Kłodzko) back in 1758. Jahnus had learned about d'O's poor financial situation and had asked whether he would open the fortress to the Austrians if he would receive some money. Jahnus exchanged some letters with the lady, he finally received a letter from d'O himself saying that he was a honest man and that, even though he was a Catholic serving a Protestant King, he would never betray his king. Nevertheless Jahnus was of the opinion that it was not d'O's “last word”. Frederick II would mention this letter after the quick capture of Glatz as a confirmation of d'O's betrayal.

In the night of June 17 to 18, FML Count Drašković took position to the east of the Fortress of Glatz.

From June 23, after the virtual annihilation of Fouqué's Corps in the Battle of Landeshut (present-day Kamienna Góra), Loudon could concentrate on his planned Siege of Glatz.

On June 26, Field-Marshal Daun, informed of Loudon's success at Landeshut sent General di Stampa from his Grand Army to reinforce Loudon's Army of Silesia. However, Daun considered that the situation in Silesia was not yet suitable for the siege of Glatz. Instead, he instructed Loudon to encamp at Landeshut and to manoeuvre in support of his own army to prevent any movement of Frederick against Silesia, thus delaying any vigorous action against Glatz. 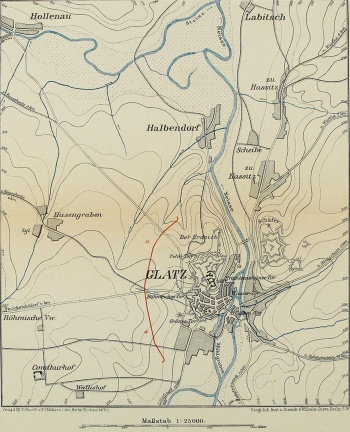 Acknowledgement Tony Flores for the digitization of the map

The defensive works of Glatz consisted of two fortresses located on steep hills on either side of the Neisse River (present-day Nysa Kłodzka) with a total of 200 pieces mounted on their walls. On the left bank stood the main fortress, the so-called "Alt Festung", and the walled town. Furthermore, after the occupation of the place in 1743, the Prussians had built a new fortress, the so-called "Neu Festung" on the Schäferberg on the right bank of the Neisse. The town proper still had its old walls and towers. A ditch with a narrow gully separated the walls from the covert way and from the bastions between the southern Grünen Gate and the western Bohemian Gate. The Mühlgraben, a tributary of the Neisse, protected the east side of the town.

The "Alt Festung" was located on steep cliffs to the north of the town of Glatz, with its dungeon dominating the landscape. The town was surrounded by a bastioned wall with dry ditches. Along the river side, it was secured by steep slopes. A long narrow extension to the main fortress was located 300 m north of Glatz on the edge of the heights on the left bank of the Neisse, it would soon be known as "Der Kranich" (The Crane). This extension was terminated by a flèche (a pentagonal redoubt) about 1,000 m. in front of the fortress and connected to its covert way by a path carved into the rock. The "Neu Festung" on the right bank of the Neisse River was built as a star fort covered by flèches. The "Alt Festung" occupied higher ground than the new one. Overall, the fortifications of Glatz were in good conditions. 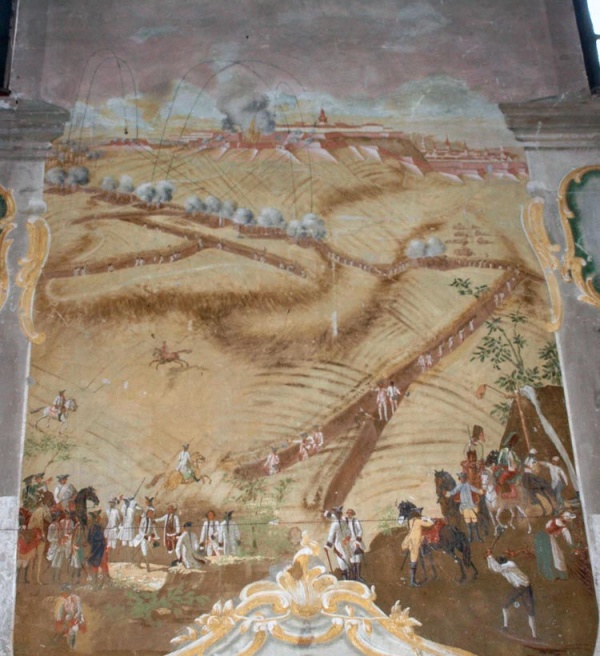 Detail of a fresco depicting the siege of Glatz.

Source: Fresco of the Castle of Brezovica in Croatia, painted in 1775 at the request of FZM Josip Kazimír Count Drašković von Trakošćan

Credit: Mr. Mravlinčić and Mrs. Srdenoselec of the Castle of Trakošćan for their kind authorisation to reproduce details of this fresco

In the night of June 25 to 26, FML Drašković sent his Grenzer light troops forward to storm the redoubt located north of the "Alt Festung". However, Lieutenant von Corcywo from Garrison Regiment Quadt with 15 men, supported by Lieutenant von Borck and 22 men of the Grenadier Battalion Unruh, drove back the attackers.

On June 26, Colonel d'O decided to name this redoubt "Der Kranich" in honour of the vigilance of its small garrison.

On July 8, Daun encamped at Ottendorf (present-day Ocice) near Naumburg an der Queis (present-day Nowogrodziec) and Loudon went there to have a conference with him. When they were informed that Frederick's Army, which had been racing towards Silesia, had suddenly turned back and was now marching towards Saxony, they were both surprised. Daun decided to march towards Dresden with the main army and instructed Loudon to take advantage of the situation to capture Glatz.

As soon as he received Daun's authorisation, Loudon ordered the siege artillery from Olmütz (present-day Olomouc) to besiege Glatz. His main corps remained at Hohkirch (unidentified location) near Liegnitz to cover the siege while he sent 8 bns (Moltke, Andlau, Simbschen, 1 bn of Los Rios, 1 bn of d'Arberg) and 5 sqns (Anspach Cuirassiers) under the command of FML Baron Unruh to reinforce the blockading force and to put siege to the fortress. Additional reinforcements (Königsegg Infantry, Starhemberg Infantry) would soon follow under FML Count Gaisruck. Jahnus also sent Preysach Infantry to Glatz.

The Austrian Ingénieur-General Gribeauval estimated that Glatz could withstand a siege of five to six weeks. The siege works were placed under the direct responsibility of FZM Ferdinand Amadeus Count Harsch, who was instructed to rejoin the siege corps as soon as possible. This division of command between Drašković and Harsch would soon prove to be troublesome.

On July 16, the Austrian siege artillery arrived from Olmütz.

On the night of July 20 to 21, Drašković opened the first parallel on the west side of the Fortress of Glatz, only some 650 paces from the covert way. The Austrians tried to work as silently as possible but their was soon betrayed in a rather peculiar way: a drunken Grenzer officer went to the glacis and shouted “Here we are !”. This caused the garrison to open a vehement fire, the surprise was gone. In that moment, all officers leading the 3,000 Austrian workers stepped in front of them with drawn sabres and forced them to resume work under enemy fire.

In the night of July 21 to 22, the Austrians began to erect several batteries.

On July 23, when FZM Harsch arrived with Colonel of Artillery Adolf Alfson, Drašković had to cede command of the siege to Harsch and to give him his own quarters. Needless to say, Drašković was not quite pleased with the situation. The long awaited siege pieces arrived on the same day.

By July 25 in the evening the Austrian batteries were ready to open on the fortress. The same evening, Loudon arrived and took overall command of the operations.

In the early hours of July 26, Loudon, accompanied by Drašković and his adjutant Lieutenant-Colonel Kray, inspected the siege works and batteries, meeting Major-General Vogelsang while doing so.

At 4:00 a.m., the Austrian siege-artillery batteries of the left wing, under Colonel Rouvroy, opened fire; soon followed by those of the right wing, under colonel Alfson. Altogether, 114 Austrian guns were bombarding the fortress. They particularly directed their fire against the Schellenbauer Bastion of the "Alt Festung". After a powder box exploded in this bastion, the crew sent to extinguish the fire scattered when they saw that fire could spread to the nearby powder tower. The besiegers' heavy fire drove away the few gunners still holding out by the guns.

By 8:00 a.m., the artillery of the defenders was silenced. Only the guns in the ravelin in front of the northwest Feld Gate, manned by the pioneers of Grenadier Battalion Unruh, still continued to fight.

Loudon's attendants then had a meeting on the left wing with Rouvroy and Alfson, along with the wounded “Tranchée Major” Kallenich (maybe Johann Kallinič who would be promoted Colonel of the Karlstädter-Szluiner Grenzer in 1761) of the Karlstädter-Ottochaner Grenzer. They saw many deserters and realised that the flèche had been abandoned by the Prussians.

Loudon. taking advantage of the confusion, decided to immediately occupy the flèche. Drašković collected some 300 volunteers. Loudon promised to pay 10 ducats and Drašković 5 to each volunteer. Captain Gnesowich from the Karlstädter-Lykaner Grenzer (who was also adjutant of Major-General Vogelsang) and Lieutenant Mylius took command of these volunteers. Another 300 men were placed under command of Major Mihokowitch. Colonel Hallenich led the supporting troops (1 bn of Andlau Infantry under Major Tertzy. Colonel Rouvroy accompanied the volunteers.

The garrison greeted the attacking volunteers with heavy fire but the undefended flèche was soon occupied. Then Major Pechardt (Jean Baptiste Baron Béchade de la Rochepine) and Major-General Gribeauval arrived at the flèche and helped to organize the next action.

Drašković then sent Colonel Rouvroy to summon the garrison to surrender. It was a very dangerous mission that he fulfilled under fire from both sides.

Drašković, after asking support to Loudon, sent forward two battalions in the path linking the redoubt to the covert way of the fortress Colonel Rouvroy accompanied this first wave which was closely followed by Major-General Vogelsang at the head of 1bn of Batthyányi Infantry, the grenadiers of Simbschen Infantry and the whole left wing of the trenches.

The garrison of the ravelin in front of the Feld Gate was isolated and the Austrians penetrated into the "Alt Festung" through the Feld Gate. The numerous Austrians in the ranks of Garrison Regiment Quadt deserted their officers, threw down their muskets and went over to the enemy in whole droves. Seeing this, Colonel von Quadt and Lieutenant-Colonel von Knobelsdorff beat the Chamade.

Colonel d'O, who was still in the town of Glatz, was informed of the situation in the "Alt Festung". He sent 2 more coys of Garrison Regiment Quadt regiment there.

Major von Unruh managed with part of his grenadier battalion to reach the northern side of the "Alt Festung". But, without losing time, Loudon ordered Lieutenant-Colonel Thelliers with 200 men to launch another attack on one of Feld Gate on the north side of the fortress. The capture of this gate threatened to isolate the Grenadier Battalion Unruh and forced them to retreat.

When Colonel d'O heard of the storming of the "Kranich Redoubt", he finally went to the "Alt Festung" at the head of his reserve. But it was too late… On his way, he met soldiers fleeing from the fortress. Soon, he found himself surrounded by Austrian grenadiers and was taken prisoners, together with Ingénieur-Colonel von Wrede.

The Austrians were now master of the "Alt Festung". The fortifications could no longer be held; the bastion in front of the Bohemian Gate had already been destroyed by the bombardment, when its two powder chambers exploded.

By 10:00 a.m., d'O had surrendered and 2 bns of the Austrian Andlau Infantry entered the main fortress.

At 11:00 a.m., Lieutenant-Colonel Quadt, commanding in the "Neu Festung" located on the opposite bank of the Neisse also capitulated without opposing any resistance.

In the assault, the Austrians had lost 64 men killed and 138 wounded. Their total losses during the siege were estimated to be of 400 men. It's interesting to note that FZM Harsch was not present during the attack. He was later on informed of the result!

From the captured soldiers only 8 took service in the Austrian Army. Furthermore, 243 foreigners were released and 124 Austrian deserters went to prison.

This in a surprising short time a fortress reputed to be one of the strongest in Silesia had been captured. Glatz, one of the two southern keys of Silesia was now in Austrian hands. Neisse, the other key fortress was still under Prussian control.

After the capture of Glatz, FML Count Gaisruck occupied the fortress with 6,400 men (8 garrison bns, 4 Grenzer bns and 200 horse), while the rest of Drašković's Corps marched in the direction of Breslau by way of Zobten.

Lieutenant Mylius won the Order of Marie Theresa for his valiant efforts. Drašković described the storming of Glatz in his reports to his superiors (cited in W. Janko's book “Laudon´s Leben”, Vienna 1869, p. 178ff).

After the war, Colonel d´O was court martialed and sentenced to death by a tribunal led by Major-General von Zieten.