When the Seven Years 'War broke out, Wittenberg was an important border fortress for the Electorate of Saxony. During the war, it changed hands several times.

On October 3, 1760, during the campaign in Saxony, after having forced Lieutenant-General Hülsen to retreat towards Coswig (present-day Coswig (Anhalt)) after the Combat of Wittenberg, the Austro-Imperial army laid siege to the Fortress of Wittenberg. 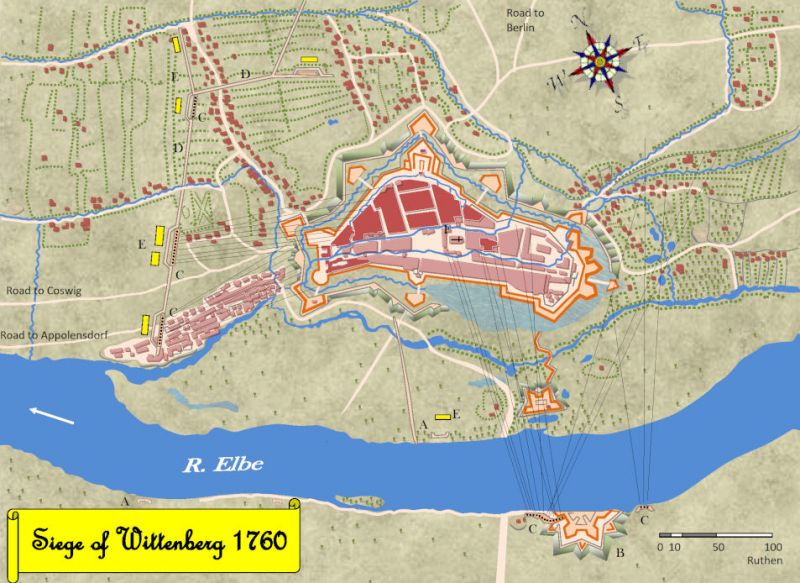 Map of the siege of Wittenberg in October 1760
Copyright: Dinos Antoniadis
Key to the map:

In October, the Fortress of Wittenberg was defended by a Prussian garrison (3 bns) under Major-General Salenmon.

On October 3 at daybreak, General Count Guasco took position on the Wein-Berge north of Wittenberg with the Grenadier Corps of the Austro-Imperial army. He then advanced against the defensive works of Wittenberg, supported by Kleefeld's detachments of Grenzer light troops. The commander of the fortress, Major-General Salenmon firmly rejected a summon to surrender and the Prince of Zweibrücken had to undertake the formal siege of the place.

On October 4, the entire Austro-Imperial army left its camp near Schmilkendorf to move closer to Wittenberg, and completely invested the fortress on the northern side of the Elbe. Generals Veczay and Lanthiery were sent to Coswig to cover the siege against any enterprise from Lieutenant-General Hülsen, who was retiring towards Magdeburg. The rest of Luszinsky's Corps set off to join these forces at Coswig. However, FML Baron Luszinsky left the army because of an illness. The Württemberger Contingent encamped on the left bank of the Elbe, opposite Wittenberg while Colonel von Zedtwitz's detachment occupied the bridgehead.

On October 5, since the western side of the Fortress of Wittenberg seemed the most suitable for an attack, the Grenadier Corps encamped in the vicinity of Piesteritz, where the siege park was established. On the same day, the besiegers managed to cut off the water supply of the fortress.

On October 6, Major-General von Kleist took position with 4 bns on the Wein-Berge, the former camp of the Grenadier Corps. The same day, Zweibrücken was informed of the march of Hülsen's Corps towards Berlin. He decided to rearrange his positions and returned to the camp of Schmilkendorf with the main body of his army, which encamped with its front facing Treuenbrietzen. The Württemberger Contingent crossed the Elbe and took position south of Piesteritz. Colonel von Zedtwitz remained at the bridgehead. Meanwhile, Veczay and Lanthiery advanced from Coswig to Göritz (present-day district of Serno, belonging to the town of Coswig), following Hülsen's Corps.

On October 8, Veczay and Lanthiery marched from Göritz to Treuenbrietzen and sent detachments to occupy the Monastery of Zinna (north of Jüterbog), Treuenbrietzen, Brück and Belzig (present-day Bad Belzig).

On October 9, the Duke of Württemberg, estimating that the Austro-Imperial army did not need his assistance to make itself master of the small fortress of Wittenberg, broke his part of the siege works. He considered that it was important to march on Anhalt and Halberstadt, to make the Prussians concerned about this region.

On October 10, the Austro-Imperials opened the trench before Wittenberg. In the course of the day and during the following night, under the protection of hedges, garden walls and the dense patch of trees to the northwest of the fortress, an infantry position 500 m long was erected at a distance of about 800 to 1000 m in front of the defensive works of the fortress. A sortie of the defenders was repulsed.

The false news that Hülsen had suddenly redirected his march towards Magdeburg convinced the Duke of Württemberg to return to the left bank of the Elbe with his contingent.

Undoubtedly the reports now arriving of Frederick's advance into Saxony incited the besiegers to greater zeal. Zweibrücken decided to send a number of regiments to reinforce the garrison of Dresden.

On October 12, the attacker managed to complete their second position spanning the entire west and northwest part of the Fortress of Wittenberg. On the same day, the Württemberger Contingent crossed to the left bank of the Elbe and encamped near Kemberg.

In the night of October 12 to 13, the Austro-Imperials established four batteries (for 12-pdr guns, howitzers and mortars) in their new positions.

On October 13 in the morning, the Austro-Imperial batteries, under Major Anton Grumbach, began to bombard the defensive works and the town of Wittenberg. The effect of this fire was overwhelming, and the defender's artillery responded effectively. However, the castle caught fire and the wind carried the fire to the houses next to the rampart, some of which were made of wood. Most of the wooden interior of the castle church was lost as a result of the bombing; the wooden door on which Luther had reputedly posted the theses, as well as his grave, burned. The heat grew so intense that the artillerymen could no longer operate the guns. A few ammunition wagons, ignited by blown sparks, also exploded. With the lack of water it was impossible to get the fire under control, There was even a danger that the powder magazine lying under the castle tower would blow up. The fortress now seemed ready to be stormed. Before that, however, it was still necessary to drain the water from the brook flowing through the city moat, which had been dammed up by the defenders.

In the evening, FML Count Guasco, who supervised the siege, sent a detachment of 120 volunteers (from the Kurköln and Kurbayern rgts under the command of Major General Count Wartensleben) against the sluices at the southwest corner of the fortress. They were supported by 2 bns (Kurköln (1 bn), Kurbayern(1 bn)) and by Kleefeld's Grenzer light troops, who advanced against the covert way.

Around 9:00 p.m., Guasco's troops made themselves master of the covert way and the locks were destroyed, capturing 1 officer and 30 men.

At 10:00 p.m., the troops destined for the assault took position close to the defensive works. Major-General Salenmon now felt compelled to initiate negotiations for the surrender of the fortress. He considered that the growing fire, which had already destroyed a third of the town and was threatening the powder magazine, the increasing desertion among the garrison troops and the losses suffered in the defence of the works, made a longer resistance impossible.

At 11:00 p.m. artillery fire ceased and the capitulation of the fortress was concluded.

On the same day October 13), the Württemberger Contingent marched to Gräfenhainichen.

On October 14 at 3:00 p.m., the garrison of Wittenberg marched out of the fortress with the honour of war and then deposited arms on the glacis. Some 1,500 men became prisoners of war and the Austro-Imperials captured 28 guns (including 10 x 24 pdrs), 6 mortars, 15 colours and a large quantity of ammunition. The prisoners were sent to Memmingen.

Leipzig, Torgau, Wittenberg and all that country had fallen to the Reichsarmee. Not a town or a magazine now belonged to Frederick in Saxony.

The destruction of the important place of remembrance of the Lutherans caused considerable media coverage. Since the Austro-Imperial army championed the interests of the Lutheran Electorate of Saxony, it could not be accused of having any anti-Lutheran intentions. However, regret was great. An anonymous author wrote in the style of Gleim's war songs:

“Towards the temple of the Lord, where Luther once steadfastly taught. Let my foot confidently carry me as I seek salvation. Then I want – oh wrath of the righteous! here too there is destruction and flame! The loyal chair of the first courageous teacher, To the wild Tombs, falls over his slumbering legs”

Württemberger Contingent (12,000 men) took part in the siege until October 9