The campaign lasted from August to December 1760

For the campaign of 1760, the Swedish Army was under the command of Albrekt Lantingshausen.

In January, the Prussians had launched a winter offensive, hoping to surprise the Swedes in their winter-quarters. However, they had soon been forced to retire to Anklam, where Lieutenant-General Heinrich von Manteuffel, Governor of Pomerania, was taken prisoner during a surprise attack by the Swedes. Nevertheless the Swedes were repulsed.

The Prussians retired behind the Peene while the Swedes took their winter-quarters, remaining idle at Greifswald. By this time, the Swedish Army consisted of 17 bns and 42 sqns with 8 bns deployed as a cordon along the border. It totalled some 15,000 men.

Major-General Stutterheim replaced Manteuffel at the head of the small Prussian Army of Pomerania which consisted of 10 bns and 10 sqns for a total of approximately 6,500 men. Another Prussian corps served as garrison at Stettin under the command of the Duke von Bevern. General Manteuffel was later sent back home on "parole" that he would not take part in the war. In 1762, after the Treaty of Hamburg, Manteuffel was released of his "parole" and could participate in the ending battles against the Austrians.

In mid-May, the Meinicke Dragoons, who were stationed in Western Pomerania were transferred to Forcade's Corps in Eastern Pomerania, they were replaced by the Plettenberg Dragoons sent from Frederick's Army.

At the end of May 1760, General Stutterheim concentrated the Prussian cantonments behind the Peene River, holding Demmin and Anklam.

On August 16, the Swedish army opened its campaign.

On August 17, the Swedish army passed the Trebel and encamped at Beestland on the left flank of the Prussian army. General Fersen appeared in front of Demmin while General Augustin Ehrensvärd took position in front of Anklam. Stutterheim moved closer to the Peene and encamped at Medow.

On August 19, the main Swedish army was at Malchin behind the Prussian left flank.

On August 21, Stutterheim evacuated Anklam and Demmin and retired with his entire force to Spantekow.

On August 22, the main Swedish army was at Ivenack. The Prussians rapidly retired southeastwards and encamped near Schönwalde in the area of Pasewalk.

By August 31, the Swedish army had concentrated at Strasburg less than 20 km west of Pasewalk. Stutterheim moved to Rollwitz to protect his left flank.

On September 3, the Swedish army resumed its manoeuvre against the Prussian left flank. Ehrensvärd entered into Pasewalk. Stutterheim was feebly engaged and continued his retreat on Prenzlau.

On September 6, the Prussian army retired to Greiffenberg (present-day Angermünde). Meanwhile, the main Swedish army occupied Prenzlau where it remained till the end of the month awaiting the result of the Siege of Colberg (present-day Kołobrzeg/PL) by the Russians.

On September 9, the Prussian army retired to Zehdenick to cover Berlin. Several engagements took place, the Prussian troops of Colonel Belling gaining advantage in most of them.

On October 2, after the relief of Colberg, Major-General Paul von Werner with 5 bns and 8 sqns marched on Pasewalk against the communications of the Swedish Army, by way of Stettin (present-day Szczecin/PL) where the Duke von Bevern reinforced his small corps with part of his garrison troops and some artillery. Werner then proceeded towards Pasewalk. He first captured a Swedish outpost at Löcknitz. The same day, Prince Eugen of Württemberg arrived with 1 bn and some guns, took command of Stutterheim’s Corps and advanced on Templin.

In the evening of October 2, General Ehrensvärd was informed that some Prussian infantry had passed by Stettin and marched to Löcknitz. He immediately sent Major Platen with 200 volunteers, 100 hussars and 2 guns to cross the Randow River and reconnoitre the area. 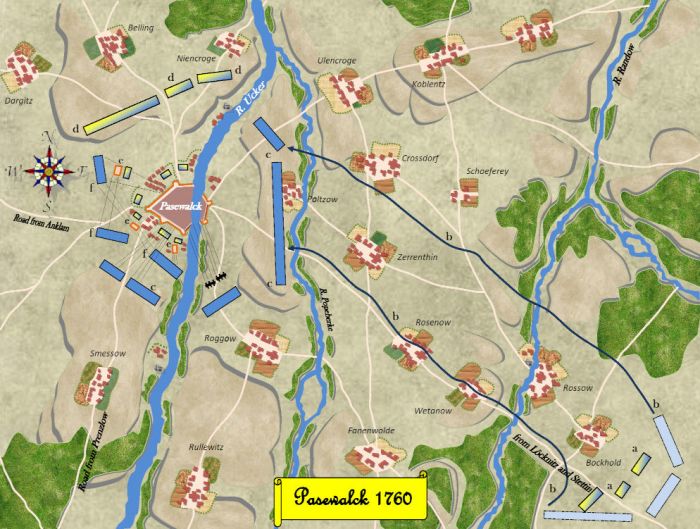 Map of the Prussian raid on Pasewalk on October 3, 1760
Copyright: Dinos Antoniadis
Key to the map:

In the morning of October 3, Platen arrived near Löcknitz and was immediately attacked by the Prussians. He retired to Wetzenow but the Prussian infantry caught up with his corps. Most of Platen’s men were taken prisoners, only hussars managed to reach Pasewalk. After the arrival of the first refugees Ehrensvärd sent out 1 bn of the Östgöta Infantry and 350 horse to support Platen. Ehrensvärd had 4 bns and 8 sqns in Pasewalk. 1 bn of Åboläns Infantry and all 8 sqns were kept in reserve in his camp. After its return, the bn of Östgöta Infantry was sent to the entrenchments in front of Prenzlauer Gate; while the bn of Västerbottens Infantry was posted at the Anklam Gate; and the bn of Älvsborgs Infantry took position at the “Mühlentor.”

On October 3 around 11:30 a.m., Werner arrived almost at the same time as Platen’s hussars. He captured all the redoubts defending Pasewalk. However, General Ehrensvärd, commanding the Swedish force, set fire to the barns in the suburbs and threatened to do the same to the town. During, the fight, Ehrensvärd was wounded and General Stackelberg took command of the Swedish force. Around 6:00 p.m, Werner summoned the Swedes to surrender but his summon was rejected. Werner then retired towards Löcknitz with 600 prisoners (other sources mention only 315 prisoners) and 8 guns. In this action, the Swedes had lost a total of 30 officers and 483 men; and the Prussians, 10 officers and 200 men.

The same day (October 3) before dawn, when he was informed of the Austro-Russian raid on Berlin, Prince Eugen precipitously abandoned this theatre of operation, leaving only a meagre force (2 sqns of Zieten Hussars, 5 sqns of Belling Hussars, 90 men of Plettenberg Dragoons and 2 bns of Frei-Infanterie von Hordt) under Colonel Belling.

On October 4, alarmed by the Prussian attack on Pasewalk, the Swedish Army under Lantingshausen retired from Prenzlau to Werbelow (present-day Uckerland). Belling remained on the right flank of the Swedes and marched to Güterberg. At night, Knobelsdorf was sent with 3 coys and 30 hussars to Jatznick to cut the lines of supply of the Swedes.

On October 9, Werner marched to Prenzlau and made a junction with Belling's Corps.

On October 13, Werner made as if to pass the Tribsee and to march on Swedish Pomerania. Meanwhile, Belling remained at Wolfshagen.

On October 16 and 17, the Swedish army retired towards Anklam.

On October 18, the Swedish army reached Anklam. The Swedes also evacuated Ueckermünde, which was occupied by the Prussians.

On October 19, Belling followed up the retiring Swedish army, entered into Mecklenburg, crossed the Peene River and put the country to contributions. He then marched to Eastern Pomerania to put a stop to the incursions of the Russian cossacks.

On October 27, Lantingshausen retired from Anklam, which was immediately occupied by Belling, who proceeded towards Demmin.

On October 28, the Swedes evacuated Demmin.

On November 25, Prince Eugen, who had left Saxony after the victorious Battle of Torgau arrived on the theatre of operation and cantoned in Mecklenburg.

On November 27, the Swedish army repassed the Peene River and took up its winter-quarters. Lantingshausen took his quarters at Greifswald, and his troops around Tribsee, Loitz, Bandelin, Klein-Bülow and Wolgast

A truce was signed for cessation of hostilities until March 27, 1761.

Gunnar W. Bergman for the additional information on the capture of General Manteuffel