Prelude to the combat

By January 1 1762, during the last winter operations in Pomerania, the Main Swedish Corps was stationed in Dargun under the command of General Augustin Ehrensvärd. When the latter saw the smoke from burning houses in Malchin, he immediately sent a relief force to rescue Sprengtporten's Corps posted in this town and threatened by Prince Eugen of Württemberg's Prussian Corps. Ehrensvärd personally commanded this relief force; while Lieutenant-Colonel Karl Constantin de Carnall led his vanguard (2,000 foot and 600 horse) which consisted of:

Belling's small Prussian force did not take part in the Siege of Malchin, but on Prince Eugen von Württemberg's request, Belling retraced his steps from Verchen. On its way, his hussar regiment was reinforced by Lieutenant-Colonel von Schwerin's Brigade. Two battalions (Grenadier Battalion 19/25 Woldeck and Grenadier Battalion 13/16 Kalckstein2) of this brigade were left behind at the bridge of Pisede near Malchin. Belling had 3 bns3 and 10 sqns of hussars4.

In the night of January 1 to 2, Swedish hussars were sent forward to reconnoitre the terrain between Dargun and Neu Kalen. The vanguard was ordered to take possession of Neu Kalen where it was then supposed to wait for the main body. Ehrensvärd also sent a courier to Sprengporten to inform him that reinforcements were on their way and would soon arrive.

Neu Kalen was a small town located at the end of the Peene Valley. On its northern side, the town was surrounded by the Peenearm (present-day Peenekanal); on its eastern and south-eastern sides, by swamps along the shore of the Kummerower Lake; about 1,700 meters to the south of the town a range of hills extended up to the forest covering the small road leading to Malchin. Between Neu Kalen and Malchin the area was well suited for a combat. 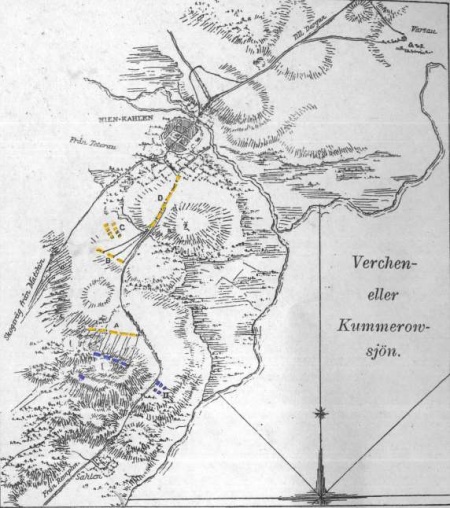 Map of the combat of Neu Kalen
Source: Collection of Tomasz Karpiński

On January 2, to prevent the Swedish relief force from reaching Malchin, Belling took his corps and marched on Neu Kalen. However, Carnall arrived at Neu Kalen ahead of him and deployed his infantry south of the town in two columns. Part of Belling Hussars were able to put fire to the town but were forced to retreat by Swedish hussars led by Moritz Diek.

Belling took position on the hill were he planted his field artillery consisting of two 12-pdrs and one howitzer.

Immediately after that, de Carnall launched an assault. The Prussian infantry was deployed in one line on the top of the hills, south of Neu Kalen.

When the Swedish infantry arrived at some 850 meters from the Prussian line, it started to deploy from columns to lines. The five battalions then advanced slowly uphill. Soon a firefight broke out. During this engagement, the Österbotten Battalion and Aminoff’s II./Dals Infantry were pushed back in disorder.

The Prussian infantry retired, leaving behind its two 12-pdrs guns mostly because all horses had been shot down. Ehrensvärd ordered the Smålands Horse and hussars to pursue the retreating Prussians. However, the forest and the snow made it almost impossible.

Belling retreated by Pisede and then to Wendischagen, after that he crossed the Peene and made a junction with the Prussian Corps of Prince von Würtemberg. In this combat, Belling lost about 170 men and 180 prisoners (Kessel gives about 200 men, Sawo - 300).

2. Since 1762 both grenadier battalions were vereinig (converged) into a single battalion vide Gierhats, Die Kampfhandlungen p. 67

5. Gaudi estimates the strength of Grabow regiment to a total 300 men for the two battalions