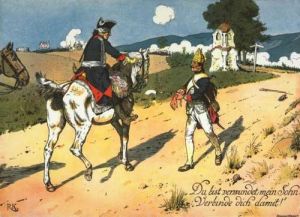 Frederick at the Battle of Burkersdorf, July 21 1762 - Source: Richard Knötel

By July 18 1762, during the Prussian campaign in Silesia, Frederick II was on the verge of launching an attack on Daun's position when Tchernichev informed him of the fall of Peter III. The Russian contingent was ordered by the new Empress Catherine II to return to Poland. After negotiation, Frederick obtained from Tchernichev that his corps would remain in its current position for three more days, thus fixing Daun's Army, while respecting strict neutrality. Frederick then took advantage of this delay to prepare an attack of the Heights of Leutmannsdorf (present-day Lutomia) and Burkersdorf (present-day Burkatow) overlooking Daun's positions. Frederick also recalled Neuwied.

On July 18, Neuwied was back in Kunzendorf Country. Frederick then turned his attention to Daun's right flank and decided to storm the Burkersdorf Heights.

On the morning of July 19, Frederick moved his headquarters to Bogendorf (present-day Witoszów). At nightfall, Neuwied marched at the head of Mollendorf's Brigade.

By the morning of July 20, all Prussian units had reached their assigned positions. They passed the Weistritz over trestle bridges and encamped with their right towards Bogendorf and their left at Esdorf (present-day Opoczka), facing Schweidnitz (present-day Swidnica). Frederick then reconnoitred the Austrian positions. The Heights of Leutmannsdorf and Burkersdorf were very steep with dense woods and several ravines. Their approach was very difficult. Furthermore, they were covered with strong redoubts erected on both banks of the ravine formed by the Weistritz and with palisades and huge abatis. General O'Kelly occupied the position of Burkersdorf with 9 bns while 4 other bns occupied the height of Leutmannsdorf.

At noon, Daun despatched Brentano's Corps to reinforce these heights as well as those of Michelsdorf (present-day Michałkowa) and Ludwigsdorf (present-day Bojanice). On the approach of Prussian troops, Austrian outposts retired on their lines, to the exception of the outposts guarding the Castle of Burkersdorf. A Prussian force stormed this outpost.

On the night of July 20 to 21, a great Prussian battery of 45 howitzers and 12 x 12-pdr guns was established near the Castle of Burkersdorf. 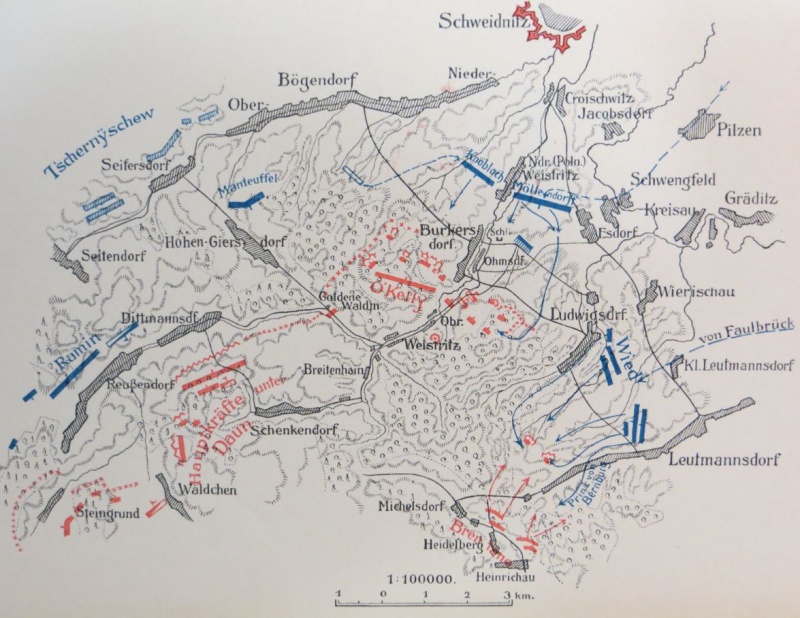 Map of the battle of Burkersdorf.

N.B.: DigAM proposes a contemporary map of the battle of Burkersdorf: - document 5328

On July 21 at daybreak, Frederick reconnoitred the Austrian positions once more but did not detect additional troops even though Brentano had significantly reinforced all the neighbouring positions. Prussian troops, who had taken arms before daybreak, started their march. Neuwied's Corps was supposed to attack the Heights of Leutmansdorf. It formed into 3 divisions: the two first ones should climb the heights and attack the redoubts while the third, under the Prince of Bernburg would protect their left from Austrian attacks by capturing the Village of Leutmansdorf.

Map of the battle of Burkersdorf on July 21 1762 – Prussian attack at Leutmannsdorf.

On the Prussian left, as planned, the Prince of Bernburg drove Austrian outposts out of the Village of Leutmansdorf. These Austrian troops retired on the 6 bns posted on the Height of Bergseite. After receiving reinforcements, Bernburg impetuously attacked these battalions and pushed them back to the Woods of Michelsdorf.

Meanwhile, Neuwied had conquered the first series of heights and planted his artillery on them to cannonade the Austrian entrenchments. Despite the neat superiority of Prussian batteries, the Austrians stubbornly sustained their fire.

Neuwied then ordered Colonel Lottum to launch an attack with the rightmost division who reached the entrenchments of the Austrian left wing, and engaged its opponents. During the combat, Lottum saw a ravine allowing to turn the redoubts on their extreme left. Lottum at the head of Mosel Infantry moved across the ravine, reformed on the opposite height and stormed the Austrian entrenchments. This regiment alone lost 300 men killed or wounded. The Austrians retired in disorder, leaving 11 guns in the redoubts.

On the Prussian left, Bernburg had more difficulty to oust the Austrians from their entrenchments. Frei-Infanterie von Wunsch, Alt-Schenckendorff Infantry and 1 bn of Finck Infantry were hurled against these entrenchments. However, they met with such resistance that they lost 500 men without accomplishing anything. Finally, they found a way to turn these entrenchments through a ravine.

Map of the battle of Burkersdorf on July 21 1762 – Brentano's retreat.

The Austrian infantry guarding the redoubts then retired on Brentano's corps. With his two wings turned and his centre threatened, Brentano abandoned the heights of Michelsdorf and retired to Wustwaltersdorf under a heavy fire from the Prussian artillery. 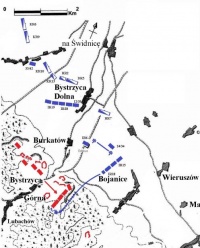 Map of the battle of Burkersdorf on July 21 1762 – Prussian attack on Burkersdorf.

Neuwied then sent his first column under protection of the great battery of howitzers against O'Kelly's corps guarding the heights of Burkersdorf. General Mollendorf covered this attack, containing a part of the garrison of Schweidnitz who had formed in order of battle on the glacis. 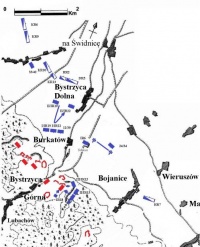 O'Kelly's cavalry retired from under the fire of the Prussian great battery.

The troops of the garrison of Schweidnitz re-entered into the fortress and Mollendorf attacked the Prince de Ligne entrenched behind an abatis covered by the redoubt to the left of the ravine of the Weistritz. The Prussians drew artillery on a path and cannonaded Austrian positions from this point. Meanwhile the II. and III. Garde climbed the steepest slopes and, moving through dense woods, arrived in front of the abatis.

General Mollendorf then ordered to beat the grenadier march and attacked the abatis. At the same moment, seeing the Prince de Ligne in a bad situation, Daun instructed him to retire. The Prussians then made themselves master of the redoubt where de Ligne had left a garrison to cover his retreat and the entire brigade took position on the heights.

Meanwhile, another Prussian force threatened the Austrian positions at Trautlibersdorf and Neu-Reussendorf to prevent them from reinforcing other part of the Austian lines.

N.B.: Looking at the Austrian losses, it seems very likely that Brentano tried to drive Wied out of the hills. Losses of Bethlen Infantry, which showed up when the Baden-Baden Infantry and Baden-Durlach Infantry were retreating from the redoubts, indicates that Bethlen Infantry was involved in some serions fighting during the third phase of the battle.

However, having chased Daun away from the heights overlooking Schweidnitz, Frederick was now in a position to undertake the siege of the fortress.

N.B.: the following Austrian order of battle assumes that the units of Brentano's Corps are still brigaded as they were at the Combat of Adelsbach two weeks earlier.

...when the Prussians reached the hills, Field-marshal Daun sent the following reinforcements:

N.B.: Erzherzog Ferdinand Infantry which belonged to the garrison of Schweidnitz is reported to have lost 4 men in this engagement

Nafziger also identifies the following cavalry units as being part of the centre but they are not present on the old map reproduced in Kessel's book.