During the campaign of 1762 in West Germany, after their defeat at the battle of Wilhelmsthal on June 24, the French generals Soubise and d'Estrées retired behind the Fulda the following night. They left a single division to occupy the entrenched camp of Kratzenberg in front of Kassel.

The two French generals then adopted a defensive stance. For his part, Ferdinand of Brunswick hesitated to exploit his recent success by extending his operations to the Main. Indeed, his communications with his left wing was seriously threatened by the French occupation of Göttingen. He then resolved to closely followed the French army of the Upper Rhine and to take advantage of any of its mistake to attack it. Soubise and d'Estrées, for their part. now relied on the eventual success of the operations of the Prince de Condé against the Hereditary Prince of Brunswick on the Lower Rhine. Meanwhile, they recalled Prince Xavier who joined them at Lutterberg with the Saxon contingent to guard the passage of the Fulda.

On July 21, observing that the corps of Prince Xavier was over extended between Lutterberg and Münden, Ferdinand resolved to attack it.

In the night of July 22 to, Ferdinand detached Zastrow's, Gilsa's, Bock's divisions along with Waldhausen's corps to execute this project. In the evening, the various Allied corps assigned to the attack on Prince Xavier's corps assembled at Wilhelmsthal. At 9:00 PM, they departed from this town to reach, during the night, the places where they were supposed to passed the Fulda.

The Allied divisions detached from the main army would pass the Fulda at various locations to converge on Lutterberg:

Meanwhile, Colonel Schlieffen, who had marched from Uslar with another column, would pass by Hedemünden on the Werra to fall on the rear of the Saxon contingent. 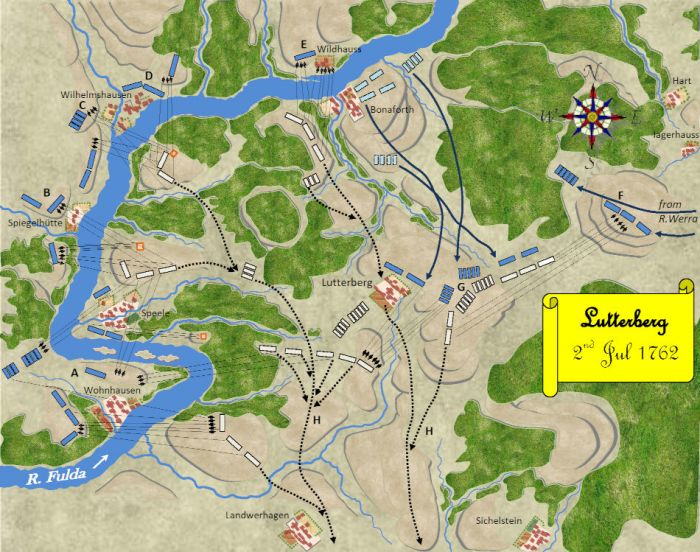 Map of the combat of Lutterberg fought on July 23, 1762
Copyright: Dinos Antoniadis
Key to the map:

A Attack of General von Gilsa at Speele concentrating his troops on the banks of the Fulda, and stopping at Wohnhausen to deploy his artillery.
B Location from where General von Bock launches his attack.
C Attack of General von Zastrow.
D General von Waldhausen seizes the post at Bonnaforth, all attacks of the Allies are successful.
E Immediately after the capture of the outpost at Bonnaforth by General von Waldhausen, Colonel Schlieffen crosses the Werra to get around the Saxon Corps, and marches on the Saxons at Lutterberg.
F Shlieffen launches his attack.
G Several cavalry engagements.
H The Saxon Corps retires and the Allies recross the Fulda.

Prince Xavier had his headquarters at Lutterberg. Two Saxon infantry brigades were deployed behind Landwehrhagen. The Saxon cavalry was in camp at Lutterberg and the the six heavy artillery pieces attached to the contingent were at Sandershausen, 9 km south-westwards. The third Saxon infantry brigade manned the entrenchments protecting the fords over the Fulda. Most of these entrenchments were located on the steep banks of the river in wooded areas.

Half of the Prinz Gotha Infantry manned the entrenchments in front of Speele, the second half being kept in support along with the Leibgrenadiergarde and the II./Feld-Grenadier. The I./Feld-Grenadier occupied the village of Speele. Furthermore, Kurprinzessin Infantry was posted on the heights between Speele and Wilhelmshausen with outposts along the Fulda.

The ford at Bonaforth was only guarded by picquets.

The only available French cavalry brigade (Royal-Roussillon) had taken position at Landwehrhagen but it had received orders to march to Sandershausen.

Finally, there were 4 French grenadier battalions posted at Münden under the command of M. de Rochechouart, and Chabot's corps was at Witzenhausen on the Werra.

On July 23 at 2:00 AM, Schlieffen passed the Werra at Hedemünden, meeting only minor resistance. However, he was intercepted on his march by Chabot's corps who forced him to retire temporarily. This seriously impeded Schlieffen's advance.

At 3:00 AM, the other Allied divisions started to pass the Fulda at their assigned positions. General Gilsa remained at Wahnhausen on the right bank of the Fulda with part of his division to cover an eventual retreat.

Entrenchments built in front of the fords of the Fulda were guarded by Saxons grenadiers who, for two hours, opposed with great courage the passage of the river. Despite a heavy artillery fire directed against these entrenchments, Gilsa's Division was unable to drive the Saxons out of their position at Speele.

Meanwhile, Walthausen was more successful at the ford of Bonaforth where he was opposed by only 100 Saxon grenadiers. He first sent 100 grenadiers and 30 hussars across the river and closely supported them with Schlemme converged grenadiers battalion. The Saxon detachment was soon driven out of its entrenchments but was able to retire unmolested.

Finally, Bischhausen Infantry managed to pass the Fulda at Wahnhausen. Prince Xavier, realizing that Walthausen was now threatening his right flank and that Gilsa had gained a bridgehead, resolved to retire his advanced brigade towards the heights behind Landwehrhagen where his two other brigades stood.

Meanwhile, Zastrow's division had passed the Fulda at Wilhelmshausen under cover of two battalion guns, Schele Infantry in the lead. After its passage, this battalion climbed the heights and drove back the Saxon grenadiers defending this sector. The other battalions of Zastrow's division immediately passed the river. Despite a stubborn resistance of the Saxons, they were gradually driven back and forced to take refuge in the woods. Zastrow then advanced on Lutterberg. His battalion guns had been left behind on the Spiegelhütte.

Bock's divisions had also met strong resistance until the arrival of Zastrow's on the flank of the defenders who immediately retired, allowing Bock to make himself master of the entrenchments and to capture 5 guns.

General Walthausen left 3 grenadier battalions at Bonaforth with instruction to advance against Münden to prevent the intervention of the French brigade posted there. He then marched with Schlemme converged grenadiers battalion and all his cavalry against the heights of Lutterberg.

All Allied divisions facing the Fulda had by then passed the river and were converging on Lutterberg, traversing the formed Saxon camp on their way and making several prisoners. Walthausen's division was the first to reach Lutterberg where it engaged the Saxon Leibwache zu Pferde. Walthausen deployed the Schlemme converged grenadiers along the outskirts of the woods and then hurled his cavalry (8 sqns) against the Saxon cavalry (4 sqns). The Saxon resisted the two first charges but were broken on the third one, routing towards Landwehrhagen.

At this moment, after much delays, Schlieffen's force finally arrived on the field in the rear of the Saxon cavalry, making several prisoners.

The Allies then redirected their march towards Landwehrhagen but Prinz Xaver Infantry bravely covered the retreat of the Saxon grenadiers to the heights behind Landwehrhagen where they rejoined the main body of the Saxon contingent.

The engagement ended around 7:30 AM.

By then French reinforcements were pouring from Münden, Kratzenberg, and Crumbach. M. de Rochechouart advancing from Münden with his grenadiers even recaptured Bonaforth.

The Allies repassed the Fulda at Spiegelhütte while Zastrow with Goldacker Infantry, Sachsen-Gotha Infantry and Plessen Infantry covered the retreat.

During the entire engagement, Prince Friedrich of Brunswick at the head of 5,800 men had made demonstrations against the French entrenched camp of Kratzenberg near Kassel to prevent any intervention of this French force.

Saxon contingent (15 bns) since the reorganisation of 1761, each regiment counted a single battalion)

French brigade at Münden under the command of M. de Rochechouart

Nafziger Collection of Orders of Battle