During the campaign of 1762 in West Germany, The French army lost Hesse at the end of June after their defeat at Wilhelmsthal. In the last days of August, Soubise's army finally made a junction with Condé. The united French armies now vastly outnumbered the Allied army of Ferdinand of Brunswick. In September, the Allied and French armies both marched towards Kassel. Ferdinand trying to stop the French advance because he planned to besiege and recapture Kassel. 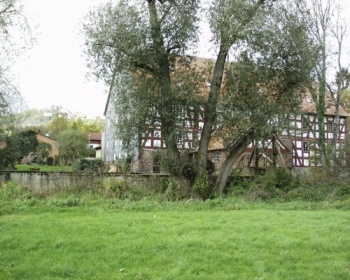 Picture of the Brücker Mühle as seen from the east (Allied side). The wall in the foreground is a later addition. On the left in the distance we also see the town and castle of Amöneburg on top of a hill.
Source: Picture taken by jws during a visit of the battlefield in 2011

Ferdinand finally managed to stop the French, taking position on the eastern (right) bank of the Ohm and securing every pass of it. Amöneburg was located at the extreme left of Ferdinand's positions who had neglected to solidly occupy the bridge leading to Amöneburg and the mill (the Brücker Mühle) besides this bridge. The castle of Amöneburg, though isolated on the western (left) bank, was a very strong defensive position. The garrison of the castle of Amöneburg consisted of a single battalion of irregulars. There had been some attempt to secure the bridge itself, and an old redoubt built the year before had been occupied on Ferdinand's side of the river for its defence but the breastwork was not above one meter high and one meter thick, so that it could be commanded by an enemy's fire, and the more easily since the western or French bank of the river was the higher. An outpost in the court of the mill was occupied by only 13 men. The fortress of Amöneburg was an advanced post over against the French left wing and on the enemy's side of the river and the possession of the bridge was of vital importance to the Allies. This bridge not only ensured communication with that advanced post but barred the advance of the French across the Ohm and secured to Ferdinand the means of taking the offensive. The carelessness which allowed these points to remain so slenderly guarded is therefore almost inexplicable.

The French commanders, judging that the positions of their right wing of the left bank of the Ohm would be threatened as long as the Allies occupied the castle of Amöneburg, resolved to capture this castle. 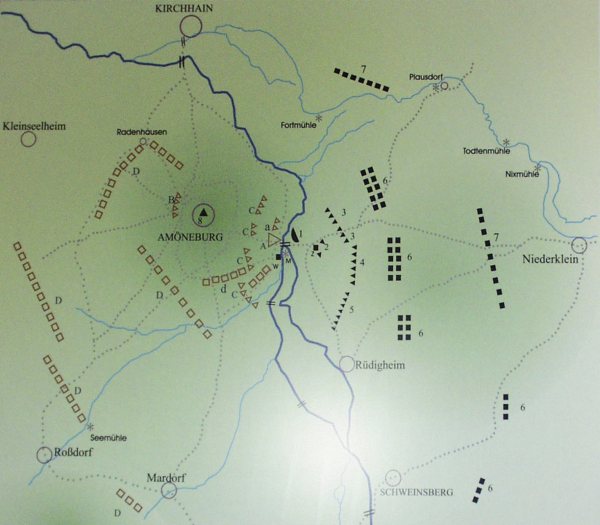 Map of the Combat of Amöneburg - Source: picture taken by jws at the museum of the battlefield
Black symbols indicate Allied units, hollowed symbols French units
M : Brücker Mühle
W : Brücker Tavern
Z : Brick shed
1 : Allied redoubt to the north-east of the bridge
2 : 2 Hessian howitzers which were cannonnaded by the French batteries
3 : 6 Hessian 12-pdrs arriving from the camp of Stausebach near Kirchhain around 8:00 AM
4 : 6 Bückeburger 6-pdrs which were reinforced by 6 Hanoverian 12-pdrs around 5:00 PM
5 : 6 Hessian 12-pdrs planted there around 3:00 PM
6 : Allied infantry units
7 : Allied cavalry units
8 : Allied garrison of the castle of Amöneburg 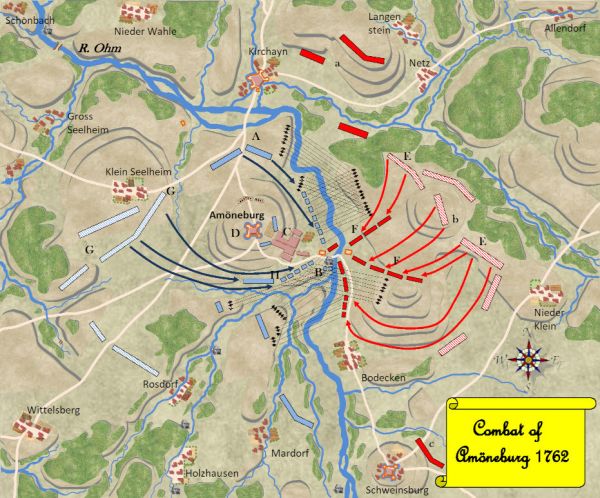 Map of the Combat of Amöneburg - Copyright Dinos Antonoadis

The valley of the Ohm, south-eastward from Kirchhain, is about 1 km broad, rising gradually on the east bank of the river to a height called the Galgenberg, and on the western bank to a steep basaltic hill crowned by the castle of Amöneburg. The Ohm itself between these hills is from 6 to 9 meters wide and from 1,5 to 2 meters deep, flowing between steep banks. Just to the south of Amöneburg was a stone bridge by which stood a water-mill (the Brücker Mühle), consisting of a massive court with a group of houses. The steep sides of the hill on which stood Amöneburg frown close to it on the northern hand. To westward the ground rises in a gentle slope, through which a hollow road, covered by an old redoubt, ran down to the mill. The town and castle of Amöneburg itself was surrounded with a wall and towers strong enough, on the south and south-western sides, to defy all but heavy artillery.

On the night of September 20, the French invested the castle of the Amöneburg so closely that not a man of the garrison could pass through their lines. Two batteries of heavy artillery were planted on the south side of the castle. Meanwhile M. de Castries, at the head of light troops, drove back the 13 men defending the Brücker Mühle and occupied the court of the mill. This done, thinking that the Allies would surely make an attempt to relieve the garrison of Amöneburg, Castries prepared to block their advance.

On September 21 at 6:00 AM, under cover of a dense mist, the French opened a heavy fire on the castle as well as on the bridge and redoubt. The men in that redoubt, 200 Hanoverians, resisted stoutly, in order to gain time for their supports to come up and for their artillery on the Galgenberg to answer the French batteries. The corps in occupation of the ground immediately before the Brücker Mühle was Lieutenant-general Zastrow's of 7 battalions, 11 squadrons and 6 guns; while Wangenheim's corps of about the same strength lay on his left, and Granby's (3 battalions of British Guards, 3 battalions of British grenadiers, 2 of Highlanders, the Blues, and 1st Dragoon Guards) on the heights of Kirchhain to his right.

By 8:00 AM, the French had brought forward more guns behind the veil of the mist; and 30 pieces of cannon were now playing furiously upon the redoubt, while small parties of infantry under cover of the fire renewed their attack on the bridge. Zastrow continued to feed the redoubt with fresh troops, and so held his ground. Meanwhile, the Volontaires du Hainaut, under the command of M. de Grandmaison, maintained their positions at the western entry of the bridge. At about the same time, Ferdinand, who was still at Schönstadt, was informed of the French attack by Adjutant Schlieffen.

At 8:30 AM, Ferdinand informed Schlieffen that half of Granby's reserve, along with all his 12-pdrs and howitzers, had been ordered to march to Zastrow's support; and that he was personally coming to the scene of the engagement. Thinking that the French were attempting to cross the Ohm at the Brücker Mühle, Ferdinand also ordered to Zastrow to hold his position at all cost.

At 8:45 AM from Schönstadt, Ferdinand issued the following orders:

By 10:00 AM, Allied commanders finally realised the full significance of the attack when the mist rolled away. It was now clear, observing the French dispositions that they were bent upon carrying the bridge at any cost. Then at last Ferdinand ordered up Granby's corps from Kirchhain to Zastrow's assistance. Meanwhile the fight waxed hotter. The battalions of grenadiers and chasseurs of Alsace Infanterie, Waldner Infanterie, d'Arbonnier Infanterie, Lochmann Infanterie under M. de Schwengsfeld; and the entire brigade of Vaubécourt Infanterie led by Castries; came to the assistance of the Volontaires du Hainaut to prevent the passage of the bridge.

By noon, the superiority of the French in artillery had made itself felt: 9 out of 12 of Zastrow's guns were dismounted and the rest were silent for want of ammunition.

From 2:00 PM, the intensity of the French artillery fire diminished and 5 French battalions tried to storm the breached western wall of the castle of Amöneburg but the two initial assaults were repulsed.

At length at 4:00 PM, the British Guards and the Highlanders arrived in the area of the Brücker Mühle, and 12 German field-pieces attached to Granby's corps came also into action. The French likewise brought up reinforcements and the combat became livelier than ever. So far the hourly reliefs for the garrison in the redoubt had marched down in regular order, but the fire of the French artillery was now so terrible that the men were ordered to creep down singly and dispersed, as best they could. British Guards replaced Hanoverians, and Hessians replaced British Guards; regiment after regiment taking its turn to send men to certain destruction. Surprisingly, during this artillery duel, the French made no massive attempt to cross the bridge.

The artillery duel wore on till the dusk lowered down and the flashes of the guns turned from yellow to orange and from orange to red. The Hessians piled up the corpses of the dead into a rampart and fired on, for the redoubt though untenable must be held at any cost.

At 7:00 PM, the French by a desperate effort carried the passage of the bridge and fought their way close up to the redoubt, but they were met by the same dogged resistance and repulsed.

At 8:00 PM, after 14 hours of severe fighting, the French finally abandoned their attempt at gaining a bridgehead on the right bank of the Ohm. Zastrow's and Granby’s corps bivouacked about the bridge, and Ferdinand took up his quarters in the Brücker Mühle.

The French then returned their attention to the castle of Amöneburg where a 40 m. wide breach had been made in the wall. At 11:00 PM, a third attack was launched. Combat lasted till 1:00 AM on September 22 when the defenders of the castle finally surrendered because of lack of ammunition. The Allied garrison lost 25 killed and 17 wounded and was allowed, in the morning, to leave the castle with the honours of war and to rejoin the Allied army.

Curiously this action is usually considered as an Allied victory. However, the French plan was to capture the castle of Amöneburg which they successfully accomplished. The artillery duel at the bridge and the deployment of French troops on the western bank of the Ohm was intended to cover the attack on Amöneburg and to prevent the crossing of an Allied relief force. This explains why the French never launched any massive attack against the bridge but contented themselves to cannonade the Allied positions at the Brücker Mühle.

In fact, each army expected its opponent to force the passage of the Ohm by the bridge of the Brücker Mühle. Therefore, each of them claimed victory: the French because they had captured the castle of Amöneburg and prevented the Allies to cross the Ohm; the latter because they thought that they had defeated a French attempt to cross the same river...

For these reasons, it could be argued that this combat was a draw.

The loss of the Allies in this action was 12 officeds killed, 22 others wounded; 8 NCOs killed, 32 others wounded; 150 men killed, 502 others wounded and another 19 missing; for a total of 745 killed and wounded, more than a third of whom were British; the 3rd Scots Regiment of Foot Guards suffering more heavily than any corps of the troops engaged. They also lost 19 horses and 4 guns. The loss of the French rose to 8 officers killed, 77 officers wounded, 350 soldiers killed and 730 soldiers wounded. MM. de Castries and de Guerchy were both wounded in this action.

To give an idea of the intensity of the firefight, we give the consumption of the Allied corps involved in this 14 hours combat:

Altogether 2592 rounds of all kind, some accounts talk about the fiercest cannonade of the Seven Years' War.

Beside this, 3 tons of musket-gunpowder were consumed along with:

With the French relief armies stopped on the Ohm, Ferdinand could redirect his attention to the siege and recapture the city of Kassel who surrendered on November 1.

Granby's corps forming the right wing on the heights of Kirchhain

Garrison of the castle of Amöneburg under Captain Kruse

Corps assaulting the castle of Amöneburg

Nafziger Collection of Orders of Battle

jws for providing the map and pictures of the battlefield.