At the opening of the campaign of 1762 in Saxony, an Austrian corps under the command of General Maquire occupied an entrenched camp near Freiberg. On May 12, the Prussian army of Prince Henri launched a surprise attack on the chain of posts screening these positions and defeated the Austrians in the combat of Doebeln, forcing them to abandon their entrenched camp. On May 14, the Prussians took positions in the former Austrian camp near Freiberg.

On September 7, General Hadik replaced Serbelloni as commander-in-chief of the Austrian forces in Saxony. He soon formed the project to chase the Prussians out of Voigtland by turning their right flank and thus threatening their bakery at Freiberg. On September 27, the various Austrian and Imperial corps initiated a series of manoeuvres to drive Prince Henri out of his entrenched positions at Freiberg. Finally, in the night of October 15 to 16, Prince Henri who, in spite of all his efforts, had been unable to contain the advance of these overpowering forces, sent his parks ahead and retired northwestward in 2 columns by Lössnitz on Reichenbach and Kleinvoigtsberg, towards General Hülsen and his reserves.

Prince Henri was soon informed that Frederick II was sending him a reinforcement of 20 bns and 55 sqns from Silesia. Knowing this, he resolved to maintain his communication with Voigtland and remained in his camp till October 22.

On October 22, Prince Henri moved to another camp on the heights of Marbach and Augustusberg to get closer to Hülsen's positions. However, Prince Henri received intelligence that the Austrians were expecting reinforcements too, so he resolved to attack the isolated Reichsarmee before the arrival of these additional troops. Prince Henri gathered all possible information on the positions of the Reichsarmee and then issued his orders. 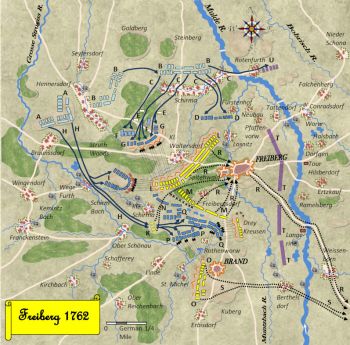 The right wing of the Austro-Imperial army was formed by the Austrian division of General Campitelli who had its front covered by the defiles of Kleinwaltersdorf and by entrenchments extending up to the Spittelwald. This wood, located between the centre and left of the Austro-Imperial positions, was protected with abatis and its débouchés in the plain of Kleinschirma covered by entrenchments defended by infantry.

On October 29 at daybreak, Prince Henri, who had taken position on the right, ordered his army to advance.

When Belling debouched from the wood of Struth, General Alt-Stutterheim occupied the heights behind Kleinwaltersdorf where he planted his artillery to cannonade Campitelli's corps, entrenched on the heights on the opposite side of this village.

During this time, Prince Henri had debouched from Oberschöna and his vanguard had pushed back Torrock's light troops posted between Linden and St. Michaelis.

Prince Henri was surprised to discover an Austro-Imperial corps of 6,000 men posted on the heights of Erbisdorf and the Kuhberg to cover the left flank of this army. The presence of this corps could jeopardize his initial plan. The Prussian units destined to outflank the Austro-Imperials could now be attacked by a superior force. Nevertheless, Prince Henri resolved to adhere to his original plan. Accordingly, he followed these Prussian units with 5 grenadier bns and 15 sqns, leaving brigadier Diringshofen with Linden Infantry, Goltz Infantry and Plettenberg Dragoons deployed en potence on his right.

Prince Henri also sent orders to General Jung-Stutterheim to immediately launch an attack on the Spittelwald.

When the Austro-Imperials saw their posts in the Spittelwald and at St. Michaelis attacked, they extended their line to prevent their left wing from being outflanked, anchoring their flank on the Drei Kreuzen knoll.

However, Prince Henri continued to extend his right. Meanwhile, Seydlitz at the head of the grenadiers attacked the Drei Kreuzen knoll while Kleist and Manstein covered his right against the Austro-Imperial cavalry.

As soon as General Jung-Stutterheim received the orders to storm the Spittelwald, Captain Pfuhl advanced against the redoubts located near Klein-Schirma and another Prussian battalion marched to the left against the entrenchments near Kleinwaltersdorf. The attack of these units was covered by the Prussian artillery.

The Austro-Imperial evacuated the redoubt and the entrenchments and took position behind abatis in the middle of the wood of Spittelwald where they were reinforced by a few battalions.

The Prussians stormed the abatis but could not maintain their positions and were pushed back to the edge of the Spittelwald.

General Jung-Stutterheim sent an additional battalion to support his faltering units. But this was insufficient to re-establish the situation.

General Alt-Stutterheim then detached one of his own battalion to support the Prussians engaged at the edge of the Spittelwald. He also moved his artillery closer to Kleinwaltersdorf. These measures momentarily stabilized the positions in this area of the battlefield.

During this time, the grenadiers on Prince Henri's right wing had made steady progress despite repeated cavalry charges launched to stop them.

Once General Alt-Stutterheim was assured that the attack of the Prussian right wing was well under way, he decided to move through Kleinwaltersdorf and to attack the right of the Austro-Imperial army. Accordingly, he marched through the village at the head of Bevern Infantry supported by Grenadier Battalion 9/10 Bähr and I./Manteuffel Infantry. Meanwhile, II./Manteuffel Infantry remained with the batteries to protect them. Schmettau Cuirassiers and Belling Hussars followed the infantry led by General Alt-Stutterheim.

Grenadier Battalion G-I/G-II Lossau, Frei-Infanterie von Schack and Frei-Infanterie le Noble preceded the column of General Alt-Stutterheim, cleared the village and then turned right, threatening to cut the retreat of the Austro-Imperial troops stubbornly holding their positions in the Spittelwald while General Jung-Stutterheim was launching a new attack against this wood with his entire brigade.

As soon as the corps of General Alt Stutterheim moved beyond Kleinwaltersdorf, they quickly marched to engage the Austro-Imperials.

The Austrian cavalry, already shaken by the artillery fire, retired in front of these columns. However, the Austro-Imperial infantry continued to hold its ground and repulsed a charge of Schmettau Cuirassiers.

Meanwhile, Seydlitz and Kleist repulsed the cavalry of the Austrian left wing, opening the way to another attack on the Austrian grenadiers defending the hill of Drei Kreuzen. The latter, seeing themselves abandoned by the squadrons previously supporting them, resolved to retire to Hillersdorf through the suburbs of Freiberg. Similarly, the Austro-Imperial troops defending the Spittelwald retired to the heights of Tüttendorf.

The Prince of Stolberg halted on the heights of Tüttendorf to rally his army and then passed the Mulde. Meyer's corps (6,000 men), who had not intervened in the battle, retired to Sussenbach by Berthelsdorf.

The Prince von Stolberg retired to Frauenstein while the Prussian army reoccupied its ancient positions at Freiberg. Belling's corps took position at Pretzschendorf.

The losses of the Austro-Imperial army amounted to 4,500 prisoners and 3,000 men killed or wounded. The Prussians lost 1,500 men and captured 28 guns and 9 colours.

General Hülsen's corps did not take part in the battle. Hülsen simply detached 7 bns and 25 sqns in the morning to the heights between Hirschfeld and Neukirch to observe the Austrian force in the forest of Tharandt.

N.B.: the following order of battle has been reconstructed from several sources (see details in the References section) the organisation of the various corps and divisions should be quite accurate but some points are uncertain, they are indicated as probabilities.

Summary: about 31,000 men consisting of one of these two possibilities:

Extreme Imperial Right Wing, probably under command of Varell (about 4,200 men in 8 bns and 9 gren. coys)

About 6,000 men deployed east of the Mulde River (excluding units detached to the other side of the river)

Covering the baggage on the Augustusberg

This article is essentially a translated and abridged version of texts from the following book which is now in the public domain:

Other sources (especially used for Austro-Imperial order of battle)

Duffy, C.: By Force of Arms, Vol. II of The Austrian Army in the Seven Years War. The Emperor Press, 2008 (see map page 384 for Austro-Imperial disposition)

Diego Lena for the Austro-Imperial order of battle