The campaign lasted from March to August 1762. This article describes the first phase of the campaign from July 2 to July 30, 1762. 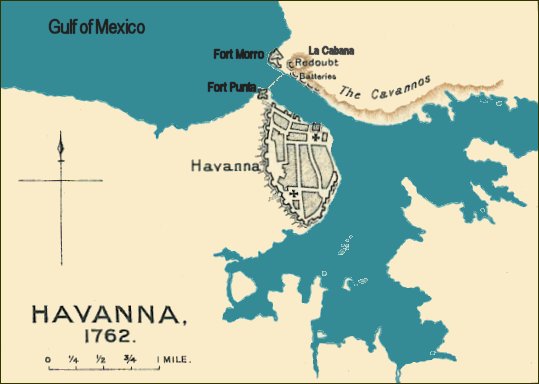 Continuation of the siege of Morro Castle

On July 2, the bombardment of Morro Castle was continued more furiously than ever. Several of the batteries were manned and armed from the fleet, and the way the seamen served their guns is said to have filled the soldiers with astonishment. "Our sea folks," wrote one, "began a new kind of fire unknown, or, at all events, unpractised by artillery people. The greatest fire from one piece of cannon is reckoned by them from 80 to 90 times in 24 hours, but our people went on the sea system, firing extremely quick and with the best direction ever seen, and in 16 hours fired their guns 149 times."

By the evening of July 3, Velasco had only 2 guns in action. All promised a speedy success, but, unhappily, the fury of the seamen's fire was equally disastrous to their own works. The fascines, scorched to tinder under the burning sun, kept taking fire, water was not to be had, and scarcely any earth and just as the destruction of the Morro defences seemed nearly complete, the British breastworks around the Morro caught fire and the batteries were burned down. In a few hours the labour of 17 days and hundreds of men was consumed, and all had to begin again. Velasco immediately capitalized on this event, remounting many guns and repairing breaches in the fortifications of the Morro. After the attempt of the previous day, naval bombardment of the Morro were found to be too costly and the further bombardment of the defences was left mainly to the shore batteries.

Since its arrival at Havana, the British army had heavily suffered from yellow fever. Over 5,000 troops and 3,000 seamen were down already with wounds and sickness, and scores were dying daily. The British army was now at half strength. The hardships of the siege were growing beyond human endurance. The food got worse and worse, the water scarcer, and the air more pestilential. No reinforcements had come from America, and the hurricane season was getting alarmingly near. Still Albemarle clung stolidly to his conventional plan, and the Spaniards were left almost as completely undisturbed from the sea, as though Havana was the heart of a continent. Albemarle, who was now engaged in a race against time, ordered the batteries to be rebuilt with the help of men of the fleet. Many 32-pdrs were taken from the lower deck of several ships to equip these new batteries.

Meanwhile Pocock had thoroughly established his position at Chorera on the other side, and had his whole fleet comfortably berthed in the new anchorage he had found. Since the Spaniards had relieved him of the pains of blockading, he had practically nothing for his battle squadron to do except to assist the troops with shore parties, and to keep a small division in the offing to intercept any reinforcements that might appear. This precaution was still necessary because, so soon as Hevia had regained his senses and discovered that effective resistance was made possible by Albemarle's mistake, he had sent far and wide through the Indies for help. Pocock's information still was that in Santiago there were 3 ships of the line, at Cartagena 3 more, besides 2 others cruising in Campeachy Bay. These vessels constituted a menace to British local control, remote it is true, but they had to be watched. Besides this preoccupation, Pocock had to cover the passage of the Jamaica convoy and the arrival of the American division, and both of them were daily expected. He therefore threw a chain of frigates out to the Bay of Florida, and kept a cruiser squadron off Matanzas to the eastward, and another off Cape Antonio to the westward to watch the Yucatan Channel, and, though the enemy's squadrons never appeared, he was rewarded by a number of prizes.

After the failure of the attack on the Morro, Pocock devoted himself to preparing for the worst. Some 50 km to the westward lay the excellent natural harbour of Mariel. This Pocock seized with a number of vessels, including 2 frigates of the Spanish Navy that had sought shelter there, and thus provided himself with a refuge where the whole fleet could lie in perfect security and water.

On July 12, Douglas appeared with the Jamaica convoy on its homeward voyage. He came to drop some hundreds slaves whom Albemarle had purchased for labourers, and the occasion was seized to buy a number of cotton bales to form the approaches and batteries. Then things began to go better.

By July 17, the new British batteries had progressively silenced most of Velasco's guns. Indeed, only two were operational. With the absence of artillery cover, it had become impossible for the Spanish troops to repair the increasing damages made to the Morro. Mackellar was now able to resume construction of siege works to approach the fortress. With the army in such a bad condition, work progressed rather slowly. All hope of the British army now resided in the expected arrival of reinforcements from North American.

On July 20, the progress of siege works allowed the British to begin the mining towards the right bastion of the Morro. Meanwhile, the now unopposed British artillery was daily hitting the Morro up to 600 times, causing some 60 casualties. Velasco had now no hope but to destroy British siege works.

On July 24, Albemarle offered Velasco to surrender, allowing him to write his own terms of capitulation. Velasco answered that the issue would rather be settled by force of arms. The same day, the Chesterfield (44) and 4 transports with reinforcements of troops from North America were lost at Cayo Confite, but the people were saved.

On July 27, the first convoy carrying reinforcements from North America led by Colonel Burton finally arrived, escorted by the Intrepid (64), Captain John Hale. During their journey, they had been attacked by a detachment of Blénac's squadron (2 ships of the line, 2 frigate and about 6 smaller cruisers under M. Fabre) who had cut off 5 or 6 transports captured some 500 men (350 regulars, 150 provincials). These reinforcements were landed at Chorera and consisted of:

N.B.: part of the troops of the first convoy arrived only on August 8.

On July 29, the mine near the right bastion of the Morro was completed and ready to explode. Albemarle, vainly feigned an assault, hoping that Velasco would finally decide to surrender. On the contrary, Velasco decided to launched a desperate attack from the sea upon the British miners in the ditch.

At 2:00 AM on July 30, two Spanish schooners attacked the miners from the sea. Their attack was unsuccessful and they had to withdraw. At 1:00 PM, the British finally detonated the mine. The debris of the explosion partly filled the ditch but the passage was still difficult. Nevertheless, Albemarle launched the assault, sending 699 picked men against the right bastion. Before the Spanish could react, 16 men had already gained a foothold on the bastion. Velasco then rushed to the breach with his troops. He was mortally wounded during the ensuing hand to hand fighting. Once the British in control of the Morro, Velasco was transported to Havana.

The last phase of the expedition is described in the following article: