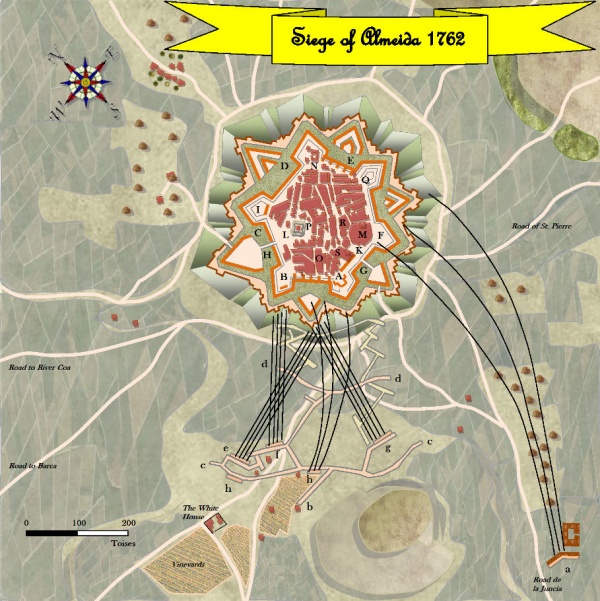 Map of the siege of Almeida
Courtesy: Dinos Antoniadis

A Bastion São Pedro where the Portuguese built a plaza with flanked angles and cave-like bomb-proof abri (lean to)
B Bastion de Olmo where they had a parapet with one face parallel to the bastion
C Bastion of Hen
D Bastion Santa Bárbara
E Bastion São Tiago where were the principal casemates of the place
F Bastion São Francisco
G Gate da Cruz
H Gate Santo Antônio
I Arsenal
K Infantry Quarters
L Château
M Convent of São Francisco
N High Square with parapet
O The Customs Office
P Parish Church
Q Quarters of the Cavalry
R São João
S La Misericordia
a Battery of 14 mortars defended by a redoubt, started firing on 12 August
b Opening of the trench on the night of 15 August
c 1st Parallel
d 2nd Parallel
e Heavy battery of 14 cannons against the face of São Pedro
f Heavy battery of 16 cannons against the Bastion de Olmo
g Heavy battery of 10 cannons against the flank of de Olmo, the face of the ravelin and the curtain of the front of the attack
h Two batteries of mortars, built in the 1st parallel, of which only one fired and only during the last days of the siege

Preparation for the Siege

On February 3 1762, Alexandre Palhares Coelho de Brito, an 81 years old officer, was promoted to sergeant-major and appointed governor of Almeida.

By March 5, Governor Palhares was already at work at Almeida to strengthen the defences of the place. His engineer in chief was the Marechal de campo João Alexandre Chermont. He did not seem to have a very good relationship with Palhares. The garrison of the place consisted of 1st Almeida Infantry, 2nd Almeida Infantry, Almeida Cavalry, a detachment of artillery and an auxiliary terço (battalion) for a total of about 2,000 men. The fortress was well supplied with artillery, ammunition and provisions.

On May 5, Chermont, who had asked to be removed from command because of difference of point of views with the governor, left Almeida. The Captain of infantry Antonio Carlos Andreis replaced Chermont as engineer.

On August 4, a Spanish force appeared in front of Almeida.

On August 5, the Spaniards began the siege of Almeida.

During the following days, the Spaniards not pressing the siege, soldiers from the regular regiments as well as those of the auxiliary unit started to desert. No serious measures were taken to stop desertions, which increased daily.

On August 7, realizing the strategic importance of this fortress, the Count of Lippe-Bückeburg commanding the Anglo-Portuguese army, wrote a letter to the governor of Almeida, instructing him to resist until the enemy had opened a breach wide enough to allow the passage of 30 men abreast. These instructions were delivered by Captain Dawson, a British engineer sent to supervise the reinforcement of the defences of the place.

The Portuguese tried to replace the old governor by Brigadier Jose Antonio Freire de Andrade but he found no way to penetrate into the fortress, which was now completely invested. Indeed a Spanish army of 32,000 men with 200 artillery pieces (not counting mortars) was besieging the place. This army was soon reinforced by 8,000 French.

The Count of Lippe-Bückeburg instructed the governor to evacuate civilians to spare their lives and to prolong the resistance of the place. He estimated that, if Governor Palhares evacuated the civilians, he could resist until September 14. However, the old governor did not possess the courage to confront the besiegers and, even though the Spaniards were still working on their first parallel and that his artillery had suffered little damage, Palhares summoned his officers in a war council where they decided to surrender. Colonels Fernando da Costa de Ataide and Francis MacLean voted against capitulation.

On August 27 at 8:00 a.m., according to the first article of the capitulation, the Portuguese garrison evacuated the Fortress of Almeida by the Cruz Gate with the honours of wars: drums beating, colours flying and 2 cannon accompanying it. It then marched towards Viseu. Palhares sent the capitulation document to the Secretary of State Dom Luiz da Cunha Manuel from Viseu, accompanied with a letter explaining that it had been impossible to keep the Fortress of Almeida longer.

In Portugal, the capture of Almeida was considered as unavoidable. However, everybody expected the place to resist much longer. On August 31, when the news of the fall of Almeida reached the Anglo-Portuguese headquarters in Nisa, the Count of Lippe-Bückeburg immediately cancelled the planned incursion into Spain. On September 2, Lippe-Bückeburg informed the Count of Oeiras of the bad news. On September 4, the garrison was cantoned in the Besteiros Valley. Shortly after, it marched towards Lisbon.

The former governor, Alexandre Palhares, was imprisoned in Coimbra for a short period before being transferred to the prison of Limoeiro in Lisbon where he died on October 18, 1771

The capture of Almeida was celebrated in Madrid with great joy.

Manuel Ribeiro Rodrigues and Joseph O'Neill for the material submitted for this article.