The siege lasted from August to October 1762

The state of the fortrees and the arrival of the Prussian army and its initial deployment are described in our article 1762 - Siege of Schweidnitz – Preparations. 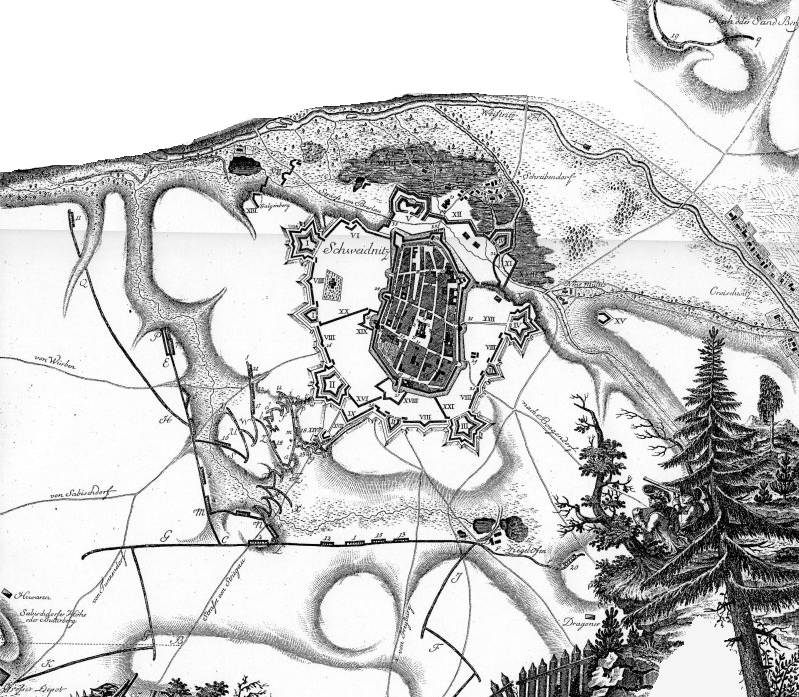 Continuation of the Siege

In the night of August 16 to 17, the Prussians completed the second parallel, where they erected Battery No. 14 (2 mortars) and opened the flying-saps on the right and left wing of this second parallel, 100 were brought on site and filled with earth. Battery No. 7 was enlarged to contain 4 additional howitzers. At about 10:00 p.m., an Austrian detachment (20 men) made a sortie but it was easily repulsed without causing damage. At about 2:00 a.m., two detachments (each consisting of 50 grenadiers supported by 150 fusiliers) prepared for a new sortie across the barrier of the parade near the Striegauer Road and from the blockhaus near No. II. However, these columns took so long to reach their assigned positions that day broke and the operation was postponed. From this night on, the covering force kept continous fire on the covert way. By daybreak, the Prussian were at only 188 m. from the palisades. During this night, the Prussians lost 1 lieutenant and 7 privates killed; and 2 NCO, 20 men and 2 gunners wounded.

On August 17, at 4:00 a.m., 500 Prussian workers started to widen the communication lines between the first and second parallel. In the morning the 2 mortars and 4 howitzers respectively destined to Batteries No. 14 and 7 were taken out of Battery No. 5 and moved to their destinations. Workers then repaired all communication lines and strengthened the breastworks of the trenches. At 11:00 a.m., the besiegers made a feu de joye to celebrate their victory at Reichenbach. In the evening Majoer-general Prince von Bernburg arrived with the covering force (8 bns) accompanied by 450 men for artillery work and 450 men and 1 brigade of sappers and miners for siege works. The same day, the Austrian relief force remained encamped at Habendorf (present-day Owiesno).

In the night of August 17 to 18, the Prussians extended the right wing of the second parallel by 120 paces and erected a new work (c. on plate V). On the left wing they traced zigzag trenches, advancing 150 paces (from b to d on plate V). At 3:00 a.m., the Austrians made another sortie from the Köppen and Striegau Gates with 30 volunteer grenadiers, 100 Walloon fusiliers and 100 Hungarian. They did not make much progress before being stopped and repulsed. In this sortie, the Austrians lost 54 men killed and 1 lieutenant and 66 men wounded; the Prussians lost 3 men killed and 12 wounded. During this night, the Prussians lost a total of 1 officer and 4 men killed; 3 officers, 1 NCO, 32 men and 2 bombardiers wounded.

On August 18, there was a pause of arm for two hours to bury the dead. The same day, the Prussians added 60 gabions to their siege works, while the miners and sappers of the 2nd Brigade resumed mining. In the evening, Major-general von Thadden arrived with a covering force of 8 bns accompanied by 400 men for artillery work and another 220 men for siege works.

In the night of August 18 to 19 at 9:00 p.m., a small Austrian party (40 soldiers and 80 workers) made an unsuccessful sortie to destroy the sapping directed against the Flèche. For their part, the Prussians were finally within range to operate against the outworks of the fortress. At midnight, a small party of 200 volunteers, supported by 1 bn in the trenches, launched an assault against the Jauernick Flèche, a relatively exposed bastion while Chief-engineer Lefebvre evaluated the distance to the Flèche. In this attack, the Prussians lost 33 men killed; and 3 officers and 98 men wounded. The same night, mining work reached a point on 50 paces from the Flèche.

The same night, the Austrian relief army retreated to the Silberberg and the Wartha.

On August 19, 200 Prussian workers widened the midmost communication trench to ease the transport of ammunition. In the evening, Major-general Gabelenz arrived with a covering force of 7 bns, sending forward 27 volunteers of this force to assist the sappers. He was also accompanied by 400 men for artillery work and 350 men for siege works. Meanwhile, the Austrians tried to place four 6-pdr guns to fire on the sapping and mining works. These guns along with those of Works VIII and IX then opened fire against the sappers and miners, forcing them to interrupt their work.

In the night of August 19 to 20, the Prussians made 3 other zigzag trenches on their left flank, getting within 140 paces from the covert way. They also planted 4 howitzers in the right wing of the first parallel to make ricochet fire between Fort N. II and the town. Prussian trenches were now so close to the Jauernick Flèche that they could not continue without having their flank exposed to the artillery of the Flèche. The Prussians had to make themselves master of the Flèche before opening their third parallel against Work No. 9. The Austrians kept 4 grenadier coys ready to repulse any attack against this Flèche. During this night, the Prussians lost a total of 6 privates killed; 1 officer, 1 NCO, 18 privates, 1 gunner and 1 miner wounded.

On August 20, the Austrian artillery maintained such a lively fire that the Prussian miners could barely install a few gabions. In the evening, Major-general Prince von Bernburg came with 8 bns as covering force while 400 men were assigned to artillery work and 100 men, 10 miners and 50 sappers to engineering work.

The same day, the Austrian Main Army marched to Patzdorf (unidentified location) and Obersteine (present-day Ścinawka Górna) while Beck took position in the entrenched camp of Wartha (present-day Bardo Śląskie). After the failure of his attempt on Reichenbach, Daun did not make any new attempt to relieve Schweidnitz.

In the night of August 20 to 21, Prussian engineers Guion. Kleist and Maske wandered out of the trenches to measure the distance still separating the Prussian works from the covert way. They wrongly estimated the distance to 56 m. while it was in reality closer to 75 m. Maske was wounded in this enterprise. For their part the Austrians reinforced the defences of the Flèche with a second row of chevaux de frise and additional palisades. Furthermore, three 6-pdr guns were placed on the left face of Work No. II to fire at the head of the Prussian trenches. During this night, the Prussians lost a total of 6 privates killed; 3 officers, 3 NCO, 28 privates, 1 gunner and 1 miner wounded.

On August 21, 100 Prussian workers made the trenches stronger while 10 miners and 50 sappers enlarged them. Furthermore, four 24-pdr guns were removed from Battery No. 1 now that the four howitzers of Battery No. 15 were ready to open. In the evening, Major-general von Thadden came with 8 bns as covering force while 400 men were assigned to artillery work and 300 men to engineering work.

In the night of August 21 to 22, at 9:00 p.m., a Prussian detachment (8 officers, 20 NCO and 300 volunteers), under Colonel von Britzke, made another attempt to storm the Jauernick Flèche. Combat lasted for two hours and the Prussians, initially repulsed, renewed their attack. Meanwhile, another detachment (1 officer, 30 volunteers, 12 carpenters, 2 miners and 40 workers) under Lieutenant-engineer Boulet had tried to dig trenches nearby; and Lieutenant-engineer Gerhard (1 officer, 50 men, 2 miners and 80 workers) had done the same on the right side. The second attack was finally driven back with heavy losses but the Prussians succeeded in establishing a new trench much closer to the Flèche. The Prussians suffered important losses (2 officers, 1 NCO, 1 gunner and 60 men killed; 13 officers, 9 NCO, 4 gunners, 1 miner and 143 privates wounded). Ironically, they experienced the effectiveness of the new concepts of fortification that they had themselves designed.

On August 22, Guasco sent Colonel Baron von Rasp of Kolowrat Infantry to offer to surrender on the principle of free withdrawal. Frederick rejected this offer, he wanted the Austrians to surrender as prisoner of war. Upon which Guasco stood to his defences again. Gribeauval and him maintained themselves with an admirable obstinacy. In the evening, Major-general von Gabelenz came with 8 bns as covering force while 450 men were assigned to artillery work and 350 men to engineering work.

With the Austrian relief army in full retreat, Frederick could concentrate once more on the capture of Schweidnitz. However, almost insurmountable difficulties had to be overcome to succeed. Failure of the attacks in the open led to the most terrible type of siege operations: mining.

The other phases of the siege are described in the following articles:

The article is mainly a condensed translation of:

A few paragraphs are excerpts from the following books which are now in the public domain:

Carlo Bessolo for the initial version of this article