Private in 1762 - Source: Detail from an anonymous work reproduced from the book 300 years of Military Uniforms... with the kind authorisation of Manuel Ribeiro Rodrigues

The regiment already existed in 1664 when it was known as the Terço de Bragança.

On April 20 1762, the regiment was divided into two distinct units.

During the Seven Years' War, the 1st regiment was under the command of:

After the war with Spain, on May 10 1763, one of these units took back its original name of “Bragança”.

At the beginning of the campaign of 1762, the regiment was attached to the corps operating in the Tras-os-Montes region under the command of lieutenant-general Cary. 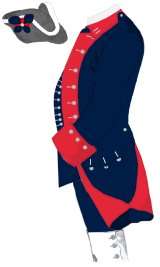 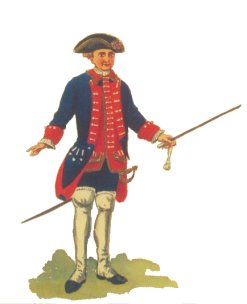 Officer in 1762 - Source: Detail from an anonymous work reproduced from the book 300 years of Military Uniforms...

Drummer in 1762 - Source: Detail from an anonymous work reproduced from the book 300 years of Military Uniforms...

The drums had ochre barrels.

Manuel Ribeiro Rodrigues, Joseph O'Neil and Juan José Torres and the Asociación Cultural de Modelismo Histórico Alabarda for the information and counselling provided for this article.