The unit was raised in 1659 as the “Terço Novo da Guarnição da Corte”. On November 24 1707, it became the regiment of colonel count do Prado.

In September 1762, the regiment was divided into two distinct units: the 1st and 2nd Novo Corte regiments. The 2nd regiment was also known as the “2nd Lisboa”.

During the Seven Years' War, this 2nd regiment was under the command of:

On May 10 1763, the two unit were reunited into a single regiment under the name of “Regimento do Conde do Prado”.

At the beginning of the campaign of 1762, the regiment was assigned to the main Anglo-Portuguese army where it was deployed in the second line of the infantry centre. In October, the regiment reinforced the detachment of brigadier Fraser. On October 21, the regiment was still part of Fraser's detachment who was occupying the heights between Mação and Val da Velha.

The following reconstruction is based on very few information. We only know that this regiment wore light blue uniform with light blue as distinctive colour. The colour of buttons is assumed to be white. We do not mention buttonholes but there might have been some. 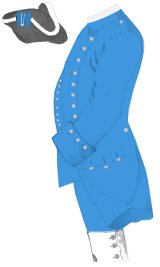