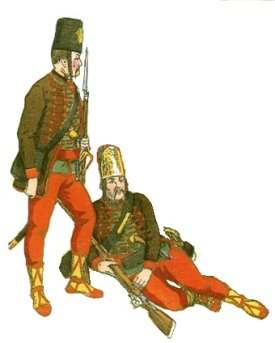 The regiment was raised on January 11 1752 by the regimentation of 20 companies (15 companies of pandurs, 5 companies of grenadiers), each of the 20 administrative districts of Novaia Serbia (a recent settlement of Serbian immigrants on the right bank of the Dnieper in Southern Ukraine) providing a company. This unit did not belong to the regular army.

As per the work of the German Grosser Generalstab, the regiment counted 4,000 men (200 men per company).

The uniform of the pandurs of Novaia Serbia was not formally regulated. Our tentative reconstruction is based on Viscovatov. In his work, all regiments of pandurs are given the same uniform.

Uniform in 1752 - Source: Richard Couture from a template by David of Not By Appointment

NCO's wore the same uniform and armament as privates with the following differences:

Corporals wore the same uniform as privates without any distinction.

Officers were armed with a sabre and a pair of pistols.

Drummers wore the same uniform as the troopers with swallow nests on shoulders. Fifers of the companies of grenadiers were similarly dressed.