In 1720, the “Richard Philipps' Regiment of Foot” sent a detachment to garrison Canso and to protect the town from Indian raids. In 1722, this detachment took part in an expedition against the Indians. In July 1724, the detachment garrisoning Annapolis defended the colony attacked by a party of 60 Indians but could not stop them from pillaging the village. In 1727, the regiment counted ten companies, each of 30 or 31 men, for a total of 394 officers and men.

In the autumn of 1736, the governor of Nova Scotia dispatched an officer with a detachment of the regiment to the harbour of Chebogue to bring to Annapolis a deserted ship.

In 1739, on the eve of the War of the Austrian Succession (1740-48), five companies of the regiment were stationed at Annapolis Royal; four, at Canso; and one, at Placentia. In May 1744, the four companies of the regiment garrisoning Canso were captured by the French when they attacked and destroyed the place. These companies were brought to Louisbourg as prisoners of war. Meanwhile, five companies of the regiment successfully defended Annapolis, resisting to two successive sieges conducted by the French from July to September 1744 and in May 1745. Then a detachment from St. John's garrison served as marines during a raid on French vessels anchored in Fishotte Bay, capturing 5 ships and 332 men. Until the end of the conflict, the regiment then served as garrison at Annapolis and St. John's.

In 1749, when Halifax (Nova Scotia) was founded, it was garrisoned by the grenadier company of the regiment under Captain Handfield.

In August 1750, part of the regiment, under Lieutenant-Colonel Lawrence, made an expedition against an Indian party established on the Missaguash River. During autumn, the British then built Fort Lawrence.

In 1752, part of the detachment at St. John’s was withdrawn to Halifax. During the next four years, the regiment was scattered about in the various small forts and outposts on the frontier of Nova Scotia, and was engaged in resisting the incessant incursions into British territory made by the French and Indians. 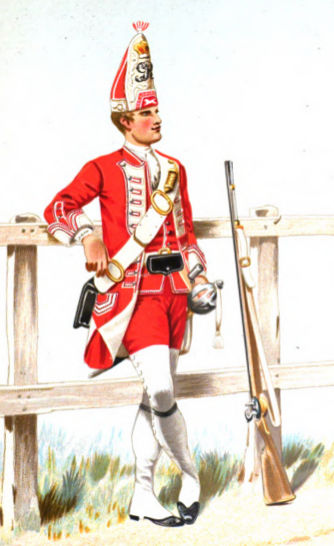 Grenadier of the regiment in 1751 - Source: R. H. Raymond Smythies

In 1755, the regiment was stationed in Nova Scotia where it garrisoned Fort Lawrence. In June, a detachment of 270 men took part in the expedition against Fort Beauséjour. The fort surrendered on June 16. From August to October, the regiment took part in the operations leading to the deportation of the Acadians.

In 1756, the regiment remained in Nova Scotia and did not take part in any major action.

In 1757, the regiment was selected for the planned campaign against Louisbourg or Québec. However, three French Naval Squadrons reinforced Louisbourg that summer and the British expedition was cancelled. When the expedition was abandoned, the various companies of the regiment were assigned to garrison duty in Halifax and Newfoundland. The 40th Foot spent the winter of 1757/1758 at Halifax, Nova Scotia. One company had been detached to to St. John’s and another one to Placentia in Newfoundland.

In 1759, the grenadiers of the regiment were part of the British expedition against Québec. They formed a converged battalion known as "Louisbourg Grenadiers" with the grenadiers of the 22nd Foot and 45th Foot. On July 31, these grenadiers took part in the failed attack on the shores of Beauport, suffering heavy losses in the fight, including Captain Hamilton and Lieutenant Bradstreet who were both wounded. On September 13, at the victorious Battle of the Plains of Abraham, they were on the right flank. Québec finally surrendered on September 18. At the end of October, Vice-Admiral Saunders fired his farewell salute and dropped down the Saint-Laurent River with his fleet. The grenadiers of the regiment, who had formed part of the “Louisbourg Grenadiers” during this campaign, embarked aboard the fleet and returned to Louisbourg where they wintered.

In 1760, 2 companies of the regiment were left in Newfoundland to garrison St. John's and Placentia while the remaining 8 companies sailed from Louisbourg up the Saint-Laurent River and took part in the three pronged attack against Montréal. After the capitulation of Montréal, these 8 companies were distributed in the surrounding villages as follows:

In the summer of 1761, the 8 companies of the regiment garrisoning Montréal were ordered to Staten Island. They were then sent to the West Indies where they arrived in Carlisle Bay in Barbados on December 24.

In January 1762, these 8 companies took part in the expedition against Martinique Island which capitulated on February 3. The same year, the regiment also participated in the Siege of Havanna which lasted from June 7 to August 13, ending with the capitulation of the city. The regiment then assumed garrison duty in Havanna.

In June 1762, the company garrisoning St-John's in Newfoundland surrendered to a French expeditionary force sent against the island.

In 1763, 8 companies of the regiment continued to garrison Havana until summer. On June 30, they sailed for New York where they arrived on July 29. From there, they returned to Halifax.

Troopers were armed with a “Brown Bess” muskets, a bayonet and a sword.

Officers of the regiment wore the same as uniforms as the private soldiers but with the following differences:

Officers wore the same headgear as the private soldiers under thier command, however, officers of the Grenadier companies wore a more decorated mitre cap.

Officers were generally armed with a spontoon, though in battle some carried muskets instead.

The body of the drums was painted buff, with the King's cypher and crown, and the number of the regiment underneath.

King's Colour: Union with its centre decorated with a rose wreath around the regiment number "XL" in gold Roman numerals.

The section “Origin and History” of this article is essentially an abridged and adapted version of the following book which is in the public domain:

Mills, T. F.: Land Forces of Britain the Empire and Commonwealth (a great website which has unfortunately disappeared from the web)