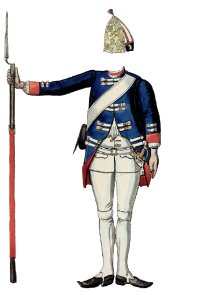 On August 26 1756, when the Prussian army proceeded to the invasion of Saxony, the battalion was part of Ferdinand of Brunswick's column which had concentrated at Halle and advanced unopposed through Leipzig, Chemnitz, Freyberg and Dippoldiswalde, to the village of Cotta (reached on September 9) south of the Elbe near Pirna. The battalion then took part in the blockade of Pirna till the capitulation of the Saxon Army on October 17.

In the Spring of 1758, the battalion took part in the invasion of Moravia and Siege of Olmütz. By May 20, it was attached to a corps (7 bns, 3 sqns) under Margrave Karl, in a camp near Mährisch Neustadt (present-day Uničov) covering the siege. On June 10, the battalion occupied Sternberg. By June 18, it had been transferred to Retzow's Corps and posted at Bistrowan (present-day Bystrovany). In the night of June 28 to 29, the battalion was sent from to reinforce an important convoy of supply destined to the Prussian besiegers, arriving from Troppau under the command of Colonel von der Mosel. On June 30, the battalion fought in the Combat of Domstadl where it managed to break through the Austrian encircling forces and to return to Bistrowan. The battalion then accompanied Frederick's army in its retreat. On October, the battalion took part in the Battle of Hochkirch in Saxony where it was initially deployed in Manteuffel's Corps, en potence towards Lauske, on the extreme left flank of the Prussian positions. When it was attacked by the entire corps of Arenberg, the battalion was overwhelmed and 2 of its companies were captured. After the battle, the remaining companies were once more converged with Grenadier Battalion 41/44. 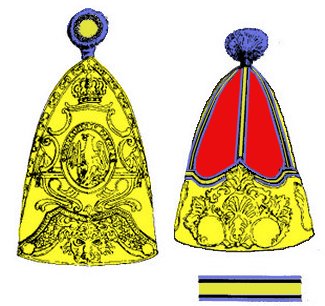 Privates were armed with a musket, a bayonet and a curved blade sabre.

Besides a pike, NCOs also carried canes (normally attached to a button at the top of the right front while carrying the half-pike).

Uniforms of officers were very similar to those of the privates with the following exceptions:

Their coats were similar to those of the privates but had no shoulder straps and no turnbacks.

The lace of the drummers was bordered in white and consisted of a 3 rows of alternating yellow and black rectangles.

The uniforms of the drummers were similar to those of the privates but had more elaborate lacing and other peculiarities:

Martina Hager and User:Zahn for the initial version of the depiction of the uniform of Garrison Regiment IX and XIII.