The tercio was raised on February 19 1656 by Jean François de Nestien in the Spanish Netherlands. It initially counted eight companies. In 1675, the tercio became “Nicolas Richard Du Puys”; in 1692, “Philippe Gourdin”; and in 1697, “Alexandre Cécile”.

In 1656, during the Franco-Spanish War (1635–59), the tercio observed the manoeuvres of the French army of General La Ferté. It then took part in the relief of Valenciennes and in the siege and capture of Condé. In 1657, it participated in the capture of Saint-Guillain and Calais; in 1658, in the sanguinary Battle of the Dunes.

In 1667, at the outbreak of the War of Devolution (1667–68), the tercio took part in the unsuccessful attempt to relieve Lille.

In 1672, at the beginning of the Franco-Dutch War (1672–78), the tercio was part of the Spanish auxiliary force sent to the help of the Dutch Republic. In 1673, the tercio took part in the siege and capture of Naarden; in 1674, in the Battle of Seneffe and in the unsuccessful siege of Oudenarde; in 1676, in the defence of Valenciennes; in 1677, in the relief of Saint-Omer, in the unsuccessful siege of Charleroi; and in 1678, in the Battle of Saint-Denis.

In the Spring of 1701, at the outbreak of the War of the Spanish Succession (1701–13), the regiment was stationed in the Spanish Netherlands. In July 1707, under the command of La Motte and Grimaldi, it took part in the recapture of Bruges and in the surprise attack on Ghent. In 1708, it participated in the Battle of Oudenarde and in the engagement of Wijnendale; in 1709, in the siege of Tournai. In 1710, the regiment was transferred from the Spanish Netherlands to Spain where it fought in the Battle of Saragossa. In 1714, the regiment joined the army besieging Barcelona.

After the war, the regiment remained in Catalonia. In 1719, it joined the Army of Navarra during the brief war with Spain. It took part in the recapture of Seo de Urgel and Castell-Ciutad and then retired to Catalonia.

In 1727, a detachment took part in the unsuccessful siege of Gibraltar.

In 1733, at the outbreak of the War of the Polish Succession (1733–35), the regiment marched across France and embarked at Antibes for Tuscany. In 1734, it was cantoned around Florence. In 1735, it contributed to the capture of Revere. At the end of the war, it returned to Spain.

In November 1738, the regiment was transferred to Tarento in Apulia.

In 1740, on the eve of the War of the Austrian Succession (1740–48), the regiment was recalled to Spain where it garrisoned various places until 1761.

In 1762, the regiment took part in the campaign in Portugal, joining the army at the camp of Zamora. It was deployed on the right wing of the first line. On April 29, it was attached to the division of the Count de Maceda who remained in Ciudad Rodrigo. At the beginning of May, the division entered into Portugal. On May 17, it captured Bragança; and on May 22, Chaves. From July 6 to August 25, the regiment took part in the Siege of Almeida. On October 31, the regiment took up cantonments in Las Rozas. On November 14, it went to Badajoz where it remained until December 18 when it was ordered to march towards Extremadura. 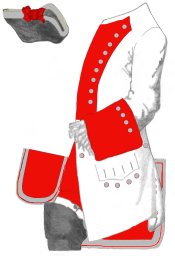