In 1695, during the Nine Years' War (1688–97), this unit was present at the siege of Namur where it formed the personal guard of the Teniente General de la Caballeria de Flandes (Lieutenant-General of the cavalry of Flanders).

According to an ordonnance issued on 3 March 1701, the 120 men of the company of the 1st Teniente General de la Caballeria de Flandes was formed into a regiment initially consisting of four companies of 35 men each. Four additional companies were later raised. The regiment was designated as “Regimiento Chacon y Orellana.

In the Spring of 1701, at the outbreak of the War of the Spanish Succession (1701-13), two squadrons of the unit were stationed in the Spanish Netherlands. In 1702, it campaigned in Flanders. In 1703, it took part in the siege of Kehl, in the siege and capture of Alt-Breisach, in the siege of Landau]] and in the Combat of Speyerbach; in 1704, in the Battle of Blenheim where it was almost annihilated. Its remnants then retired to Flanders. In 1706, it took part in the Battle of Ramillies; in 1708, in the Battle of Oudenarde; and in 1709, in the Battle of Malplaquet. In 1710, the regiment was transferred from the Spanish Netherlands to Spain where it participated in the combat of Ocaña and in the decisive Battle of Villaviciosa. In 1711, it served in Aragon and Catalonia to cover the various sieges. In 1713, it joined the troops blockading Barcelona. In 1714, it took part, in the blockade, siege and capture of Barcelona which was finally stormed on 11 September.

In 1715, the regiment took cantonments in Valencia.

In 1719, the regiment was transferred from the District of Valencia to Catalonia to fight the French.

In 1727, one squadron of the regiment took part in the unsuccessful siege of Gibraltar.

In 1735, the regiment joined the army assembling in Extremadura to observe the Portuguese army. In 1737, it took cantonments in the Province of Extremadura.

In 1754, the regiment was transferred to the District of Andalusia and took up cantons in Rota.

In 1763, after the war, the regiment incorporated four companies of Barcelona Cavalry.

At the beginning of May 1760, each company of the regiment was increased with 5 troopers. The regiment was still cantonned in Rota. It was then sent to join the Army of Extremadura for the planned invasion of Portugal. On October 24, it took up cantonments in Herrera. On November 14, it was transferred to San Vincente.

Before 1749, the uniform of the regiment was white with red distinctive. In 1749, the distinctive colour was changed from red to blue. 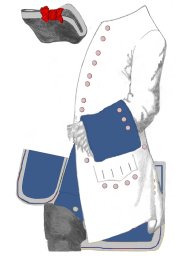