The Algonquin people are an Algonquian-speaking group of Native Americans. They inhabited a region in present-day southern Québec and eastern Ontario, along the Ottawa River.

In 1570, the Algonquin people allied themselves with the Montagnais against the Iroquoian tribes occupying the Lower Saint-Laurent Valley.

In 1609, the French explorer Samuel de Champlain made alliance with the Algonquin, which then numbered some 6,000, and the Wyandot peoples and promised to assist them in their war against the Iroquois Confederacy. The same year, Champlain accompanied his new allies in an expedition on the shores of Lake Champlain, where a skirmish against the Iroquois took place. In 1610, a more important engagement took place near present-day Sorel, where Champlain and his allies decisively defeated a large party of Mohawk warriors.

In May 1613, Champlain reached the Algonquin village of Kitcisìpirini (present-day Morrison Island) on the Ottawa River. The village was strategically located on the trade route between the Great Lakes and the Saint-Laurent River.

Between 1630 and 1640, many Algonquin converts settled near Trois-Rivières and at Sillery, near Québec.

In October 1666, a party of Algonquin warriors joined a force under M. de Tracy. This expedition set off from Fort Sainte-Anne to destroy Iroquois villages. It sailed southwards on Lake Champlain and before entering into Lake Saint-Sacrement (present-day Lake George), it built a small fort near the falls separating the two lakes. The expedition continued its advance through dense forests, destroying Iroquois villages. By 5 November, the expedition was back to Québec.

By 1676, the Algonquin people had been decimated by epidemics and some of them resettled at Pointe-du-Lac near Trois-Rivières where they lived until 1830.

In 1717, the French Crown granted the Mohawk a tract of land 14.5 km long by 14.5 km on Lake Deux-Montagnes, just west of Montréal. The settlement, known as Oka or Kanesatake, was a Catholic mission supervised by the Sulpicians. It initially counted 300 Christian Mohawk, about 100 Algonquin, and approximately 250 Nipissing peoples.

The Algonquin people maintained their alliance with the French until the conquest of Canada in 1759 and 1760.

In mid-August 1760, the Algonquin and eight other former French allies met with the British representative, Sir William Johnson, and concluded a treaty, where they promised to remain neutral in any future conflict between France and Great Britain.

By 1768, the British estimated the population of Algonquin people to only 1,500.

During the American War of Independence, the Algonquin peopled sided with Great Britain against the Americans. 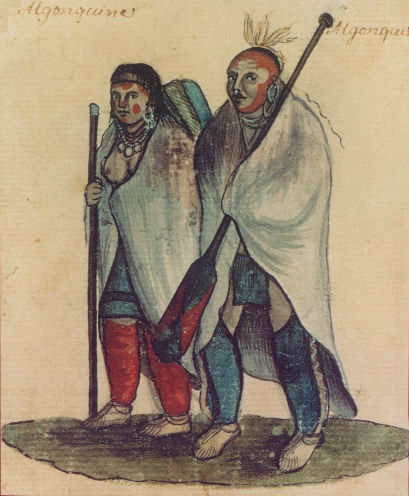 Algonquin couple circa 1720, an 18th-century watercolour by an unknown artist – Source : Wikimedia Commons

Besides the accompanying illustration of an Algonquin couple circa 1720, we have been unable to find other specific characteristic about the dress of this Native American people that would distinguish them from other peoples. If you can suggest sources documenting such characteristics, please do not hesitate to contact us with your suggestions.

Bows and arrows with flint tips were the traditional weapons of Algonquins warriors. War clubs were also used. By mid XVIIIth century metal knives and hatchets were common, as well as tomahawks with iron blades.

From 1623, an increasing number of Algonquin warriors had European firearms which had been traded with the French.